Mexico's network of autonomous communities and organizations declaring resistance against "bad government," capitalism and organized crime is growing, despite the violent onslaught against them. 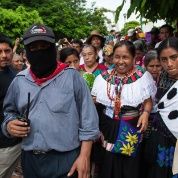 Their shared ideology is based on promoting the twin values of tolerant self-government and direct democracy, while moving away from established political parties and the state's notoriously violent security forces.

The National Indigenous Congress (CNI) is commonly defined as fighting for a self-governed, anti-capitalist society composed of Indigenous groups from all over Mexico.

They call themselves a "space" for the voices of the oppressed – including Indigenous groups, women, farmers and workers – and are backed by the National Liberation Zapatista Army (EZLN), a Mayan organization that has built autonomous governments in the state of Chiapas.

Last year, the CNI elected the Indigenous Council of Government (CIG) and spokesman Maria de Jesus "Marichuy" Patricio Martinez to compete in this year's presidential elections as an alternative to traditional politicians.

Their motive, they say, isn't specifically to garner votes, but rather to make themselves – and their positions – heard.

In order to become a formal candidate and appear on ballots, Martinez and the CIG need to gather almost 900,000 signatures before February 18.

However, with the exception of a few locations, people wishing to show their support by giving their signatures can only do so via an official app, which they must first download on a smartphone. Critics claim this is unfair, not only because smartphones are expensive, but also because internet access is far from universal.

It is the first time such a system has been used to register independent candidates in Mexico, and the CIG has vowed to continue its campaign despite the challenges, gathering signatures in public places in defiance of the threat of police harassment.

One of the movement's greatest assets is its concentration of autonomous communities involved in land disputes and faced daily with violence at the hands not only of criminal gangs but of government representatives, especially in the state of Michoacan.

The Indigenous Purepecha community of Caltzontzin, along with members of the Education Workers National Coordinator (CNTE), have been actively blocking local roads to official vehicles as a form of protest and a way of pressuring the government. Their demands include payment of long-delayed salaries and respect for their community's self-determination.

On January 24, about 300 police officers tried to lift a railroad blockade several times, clashing with demonstrators. The police were outnumbered by members of the community and, ultimately, chose to turn tail and run away.

More violent confrontations between police and demonstrators have taken place since then, prompting the CNI to publish a warning: "We urge you to be alert of another repression attempt from the bad government of Michoacan," the CNI posted on Twitter.

The Assassination of Guadalupe

Cheran is an Indigenous Purepecha autonomous community in the state of Michoacan. In 2011, locals abolished political parties and the imposed government in favor of establishing a new government based on their own Indigenous customs. Tired of being harassed by criminal gangs and illegal loggers, they decided to take security into their own hands.

Cheran won't be taking part in the CIG's current electoral venture, because the community has barred any ballot box or political campaign from its territory, but they have said they respect the CIG's move.

Guadalupe Campanur Tapia was one of the founders of the Communitary Watchout and the Cheran's Forestrangers group. She was 32 years old when her body was discovered on the outskirts of the nearby community of Chilchota more than a day after she had been reported missing: the first murder committed in the community since 2012.

The CNI has said its members share the pain and anger at Tapia's death, which "hurts us because the women that fight and organize themselves draw with dignity the road that leads everyone to freedom, the road to resistance to war and the autonomy of the community."

The movement also said Cheran possesses "the light to dismantle the capitalists' power for our people to flourish."

On January 21, journalists Daliri Oropeza, Al Dabi Olvera and Cristian Rodriguez were robbed at gunpoint while covering the CIG campaign around Mexico.

The CIG was attending a meeting in the Indigenous Nahuatl community of Santa Maria Ostula, in Michoacan: one of the first states to launch an armed self-defense movement to combat violence by agents of both the government and organized crime.

The journalists had described Ostula as "an island of security" in a region ravaged by drug cartels and corruption because of the people's political self-administration.

In the last car of the CIG's caravan leaving Ostula for their next meeting in Paracho, they were separated from the rest of the vehicles by five men in a truck. The armed men approached the journalists' car – which was marked as a press vehicle – and demanded they hand over their cameras and cellphones, declaring they had "been lucky" to lose only their property.

The state government dismissed the planned nature of the attack, calling it a common robbery and denying that the CIG caravan had been targeted.

Still On The Road

On January 25, the caravan was on its way to Chilpancing, in the state of Guerrero, when it was halted by a man driving a truck near Iguala, where 43 rural students went missing in 2014 after being arrested by local police. Their remains have yet to be found.

Members of the caravan confronted the driver and asked why he was following them, but he ran away only to return later and follow them again.

Shortly afterwards, a federal police car appeared and began following the CIG vehicles, taking pictures pictures of them. The CIG asked social-media users to stay alert until the caravan had arrived safely in Chilpancingo.

While repression and violence remain common, especially in states such as Guerrero and Michoacan, organized communities such as the CIG have proven there is an alternative and they are determined to defend and extend their victories.

Although it's doubtful that the CIG will win enough votes to put Marichuy on the ballot, the group is continuing its journey across Mexico, alternately speaking and – perhaps more importantly – listening.

This is their objective, rather than the pursuit of power, as is the goal of traditional political parties. As one CNI member has already said: "Winning the elections would be the worst thing that could happen to us."