At a time when the federal government is launching vicious attacks on workers, immigrants, people of color and the poor, some are hoping to make Los Angeles the staging ground for a sustained tooth-and-nail resistance to the rule of President Donald Trump. 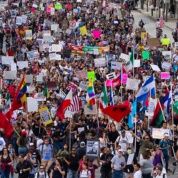 On Monday, International Worker's Day, a diverse array of L.A. groups ranging from the militant to the mainstream will join together for the first time in over a decade to fight against what they call “Trump’s neo-fascist policies against the working class.” Organizers hope the event will be the biggest mass mobilization and strike the city, and the country, has seen since 2006.

The hope isn't unfounded – the greater Los Angeles metropolitan area is home to the largest undocumented immigrant population in the United States. Far be it from the site of celebrities and glamour that some imagine, the sprawling city is a center for working-class immigrant communities drawn from across the globe: Mexico, Central America, Korea, Thailand, China, Ethiopia, Armenia, the Philippines, Vietnam, the Middle East, and so on. Coupled with the economic disparities prevailing in the city, where poverty rates stand at 22 percent, one can hardly imagine a better location for practical, combative internationalism than the palm tree-studded streets of L.A.

May Day – as International Worker's Day is known – was born amid the workers' struggles of the U.S. over 130 years ago when immigrant workers, largely from Europe, fought for an 8-hour workday. Despite this, throughout the 20th century in the U.S. it was buried under the heavy weight of anti-communist red-baiting and Cold War-era patriotism. In 2006, however, the workers and youth of L.A. put May Day back on the calendar as they flooded the streets of the city by the millions.

“(May Day) was only seriously revived in the U.S. with the mega-marches of 2006, by immigrant workers and their organizations, to defeat the infamous Sensenbrenner Bil that sought to completely push immigrant communities underground by criminalizing them and seeking their wholesale removal,” Nativo Vigil Lopez, a lifelong organizer and political/legal adviser to Hermandad Mexicana La Original, told teleSUR. “Those efforts by the xenophobes in Congress and their allies were soundly defeated.”

Indeed, the Sensenbrenner Bill – named after a far-right Midwest senator who introduced the proposal and still sits in power – faced a major defeat. Since then, the number of workers attending marches like 2006's has dwindled as Democrats attempted to rally workers behind unpopular immigration reform proposals that floundered in Congress. The bills' failures – not to mention the ruptures within the migrant justice movement – were largely due to the anti-worker nature of reform proposals, all of which included increased enforcement and border militarization provisions and guest worker programs.

In the meantime, former presidents George W. Bush and Barack Obama put together a monstrous deportation and removal apparatus now being wielded by the Trump administration. Now, as Trump settles into the White House,  along with his clan of immigrant scapegoating white nationalists, the spirit of Sensenbrenner is back with a vengeance.

“As a teacher (and) a community member … the political climate and racism surrounding Trump's proposed policies for deportation and building a wall are cause for extreme alarm,” Union del Barrio member Guadalupe Carrasco told teleSUR. “I cannot sleep comfortably at night knowing this is happening to families me without doing my part to fight against it.”

As an educator, Carrasco can also feel her students' awareness of the injustices permeating the U.S. and shares their sense of impatience and anger about the attacks on their community. From Trump's snide comments about "bad hombres" to the omnipresent police brutality and abuse that's grown magnified through social media, young people increasingly feel that they're under the gun, lying in the crosshairs of the system itself.

Williams Rojas, a 12th-grade student at Maya Angelou High School in South Central L.A., is excited about joining Monday's march to simply participate in the defensive fight against racist policies and attitudes supported by Washington.

“My friends and family believe this will be an important, remarkable day to show our will to change our community,” Rojas said. “We, people of color in general, have been discriminated against for years, especially with this president.”

For author Rodolfo “Rudy” Acuña, a man considered an academic father of ethnic studies in the U.S., the May Day marches serve their role primarily as an educational tool in a process spanning generations. Pointing to the recent history of Mexican and Chicano resistance in the U.S., from the walkouts of the 1960s to the 1979 Chicano Moratorium, and the anti-Prop 187 demonstrations of 1994, the professor stresses that the present is ripe with learning opportunities for those younger generations whose aspirations require lifting.

OPINION:
The US Political Scene: Whiteness and the Legitimacy Crisis of Global Capitalism

“(This organizing) is a mass education tool. Sometimes it is slow, at other times it explodes,” Acuña told teleSUR. “It is like the rolling stone and moreover, it unifies the disparate segments of a progressive movement and increases moral outrage.”

Lopez agrees, pointing to the growing bonds of unity between those threatened by the White House – from labor to Muslims, Native Americans, environmentalists, LGBTQ, women and Black people – while tying that unity to a deeper, more probing analysis of U.S. society and the world capitalist sysem at large.

“All of these harmed communities are coalescing into a broad social movement, a broad front, to oppose the Trump administration,” he said. “His administration has opened the door to bigger discussions about alternative social systems to the existing one.”

“Trump has shaken up the working class to more clearly discern its class interests as dissimilar to those of the ruling class,” Lopez continued. “This is a good thing in terms of building class consciousness among workers and their families, this makes them ready for more serious struggle.”

Lopez added that the targetting of immigrant workers is also part of a broader strategy to divide and conquer the working class.

Carrasco shares Lopez's view, hoping that Monday's march will remind Los Angelenos that their participation is required in the battles to come, but also that they have the power to win when they unite in all of their diversity.

“We absolutely can shake up these unjust systems if we come together and speak as a collective voice,” she said. “A collective voice that says 'Ya basta' – enough! – loud and clear.”