Martin Luther King, Jr. and his legacy will again be debated as the U.S. honors the Civil Rights leader on Jan. 16, 2017. King had become progressively more radical in the 1960s, which would be what finally led to his assassination. 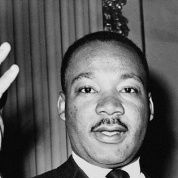 Some of Martin Luther King Jr.'s Most Radical Statements

King was murdered in Memphis, Tennessee on April 4, 1968. He had traveled there in support of striking African-American sanitation workers who were protesting against unfair wages and working conditions, being paid much less than their white counterparts.

Around the passage of the Civil Rights Act in 1964, which outlawed discrimination based on race, color, religion, sex, or national origin, King's speeches took a turn towards the radical left.

"We must mark him now, if we have not done so before, as the most dangerous Negro of the future in this nation from the standpoint of communism, the Negro and national security," FBI Domestic Intelligence Chief William Sullivan wrote in a memo in 1963.

It was the height of the Cold War, the U.S. unrelenting anti-communist surge.

Soon thereafter, FBI Director J. Edgar Hoover approved a large-scale surveillance plan against King, in order to prove he was a “communist.”

Martin Luther King Jr. was much more radical than they would want you to believe... #MLKDay. https://t.co/CEaS5cLJwT pic.twitter.com/Uvj6AfYZQr

While it did no such thing, it did result in the mailing of poorly-worded letter in 1964 from the FBI which informed King he had 34 days to kill himself, otherwise tapes of his extramarital affairs would be made public.

This was part of a wider campaign against left-wing and African-American revolutionaries called the Counterintelligence Program, which targeted groups like the Black Panther Party and leaders such as Malcolm X.

King had begun to speak out against the war in Vietnam, which by 1968 was in its 13th year, and had continued his critique of capitalism.

“The evils of capitalism are as real as the evils of militarism and evils of racism," King said in a speech to the Southern Christian Leadership Conference in 1967.

That same year, he delivered his "Beyond Vietnam" speech, one of the sturdiest moral arguments against the war.

James Earl Ray was convicted of assassinating King after being apprehended in London two months after the killing. Ray was quickly extradited to Tennessee and charged.

Initially, Ray confessed to the killing on the advice of his attorney and was convicted to a 99-year term, but recanted three days after.

Ray maintained his innocence, and in 1993, a man named Loyd Jowers of Memphis appeared on national television and alleged that the U.S. government, the mafia and himself all conspired to have King assassinated.

King's family had long suspected a wider effort involved in the assassination and brought a case against Jowers in 1999.

Twelve jurors — six white and six Black — reached a unanimous verdict on Dec. 8, 1999, after about an hour of deliberations, that Dr. Martin Luther King, Jr. was assassinated as a result of a conspiracy.

This decision came after four weeks of testimony and over 70 witnesses. Jowers was convicted, along with "unnamed co-conspirators."

Although a civil court found Jowers guilty, it wasn't enough to get the retrial for Ray that both he and King's family wanted.

"The moral arc of the universe is long, but it bends toward justice," Coretta Scott King said on Dec. 8, 1999. "I feel that the jury's verdict clearly affirms this principle. With this faith, we can begin the 21st century and the new millennium with a new spirit of hope and healing.”