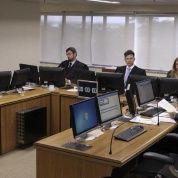 The climate is tense as supporters and detractors have converged on the city to accompany the announcement that may also determine if Lula is allowed to run as president in this year's election.

Members of the Popular Brazil Front and landless farmers have constructed the “Encampment for Democracy and in Defense of Lula.” The site will play host to supporters of Lula's cause as the court rules on his appeal.

Yesterday, dozens of jurists, intellectuals and politicians convened in the Federation of Workers in Financial Institutions of Rio Grande do Norte, Fetrafi, to discuss the legal right of former Brazilian President Luiz Inacio "Lula" da Silva to run in this year's presidential election, as well as defending democracy.

Meanwhile, political opponents have also promised to make their presence felt by descending on the city as well. One city policewoman, Flavia Cristina Abreu, went as far as publishing a video on social media promising Lula supporters police “lines, sticks and gas bombs” while in Porto Alegre.

Lula's legal defense has described the charges filed against him as being prime examples of “political oppression,” affirming that “accusations are opened against the country's biggest political leader without evidence to allow an accusation to be opened.”

Judge Sergio Moro sentenced Lula to nine years and six months in July last year for allegedly giving OAS construction company special treatment and awarding contracts in exchange for a beachfront apartment. However, Lula’s defense team argue that the information was obtained from a former OAS head who had struck a plea bargain deal with prosecutors.

Similar to many observers, they also pointed out that the case against Lula is heavily influenced, if not orchestrated, by the mainstream, corporate media. A recent survey by Veja revealed that the former president has been the greatest target of fake political news published on Facebook in Brazil.

“If they don't want me to be a (presidential) candidate, go to the polls and vote against me. Don't create artifices and tricks to prevent my candidacy,” he told his judicial and media mogul opponents.

The seeds of his mass popularity began to blossom back in 1968, in broad day of Brazil's military dictatorship, when he joined the Sao Bernardo Metal Workers Union, an organization he considered to be so "boring" that he preferred staying at home watching soap operas.

Elected president of the workers' union in 1975, Lula advocated for workers' rights, organized mass strikes and sought to improve communication within their ranks.

Having experienced drought, famine, plagues and abject poverty during his childhood in Brazil's northeastern state of Pernambuco, Lula would never forget his less than humble beginnings, nor working as a shoeshine boy in 1953, when the people of Brazil elected him president in 2003.

What else but a slew of social programs to mark his two terms in office, lifting millions of Brazilians out of poverty and removing the country from the U.N. World Hunger Map. When the World Food Program hailed the country as a champion in the fight against hunger, former Social Development Minister Tereza Campello said, “leaving the Hunger Map is a historic milestone for Brazil."

"We are very proud because overcoming hunger was a priority for the Brazilian state," she added.

One of Lula's most ambitious and successful programs was, and still is, the Family Allowance (Bolsa Familia). Launched in 2003, it provides stipends to families living below the poverty line. In turn, those families must prove that their children are attending school and have been vaccinated.

Also, his achievements in housing and education pale in comparison to those who ruled the country over the past 500 years.

For the time being, TRF-4 judges are tasked with determining Lula's political aspirations, a return to the presidency - democracy- to help the country recover from its course austerity on steroids, labor reforms, proposed pension reforms, a 20-year cap on public spending, and auctioning or sale of Petrobras, Eletrobras and other publicly-owned companies.

“I'm absolutely certain that I did not commit a crime,” said Lula, adding that “what is happening to me is far less than what's going on with millions of Brazilians.”