A new book released in the Philippines collects the work of eight authors who re-examine modern imperialism and monopoly capitalism a century after Lenin's groundbreaking title was published. 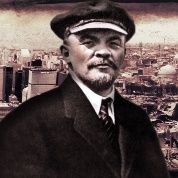 One hundred years ago, Russian revolutionary Vladimir Ilyich Lenin's seminal 128-page work, Imperialism: The Highest Stage of Capitalism, was published for the first time in pamphlet form. Written a year prior from his place of exile in neutral Switzerland and released in then-Russian capital Petrograd, the pamphlet took shape amid the world's first truly global conflict – when cities were reduced to rubble, empires were toppled and millions of lives were claimed.

IN PICTURES:
A People's History of the First Global Imperialist War

Far be it from a pacifist manifesto denouncing the evils of war through emotional platitudes, Lenin presented caustic arguments against what he called the highest stage of capitalism – modern imperialism or monopoly capitalism.

Looking at “the summarized returns of irrefutable bourgeois statistics, and the admissions of bourgeois scholars of all countries” through a Marxist lens, Lenin explained how it was this new form of capitalism that forced the world's major capitalist powers to engage in rivalries that eventually boiled over into open military conflict.

Lenin ripped the mask from both the war propaganda at the time as well as from his pro-war social-democrat opponents, describing a global politics shaped first and foremost by parasitic, profit-driven motives that eventually culminated in the First World War, which was “imperialist (that is, an annexationist, predatory, war of predatory, war of plunder) on the part of both sides.”

Lenin defined modern imperialism as: 1) The concentration of production and capital into monopolies that dictate economic life; 2) the merger of bank capital with industrial capital and the resulting “financial oligarchy,” or domination of finance capital; 3) the higher priority attached to the export of capital versus commodity exports; 4) the formation of groups or “cartels” of international capitalist monopolies and associations that divide global markets; and 5), The territorial division of the whole world among the greatest capitalist powers.

Published in countless editions and nearly every language in the world, Lenin's contribution to Marxism became a theoretical pillar for workers' movements and anti-colonial national liberation struggles throughout the globe.

A century after the publication of Lenin's Imperialism, the concentration of capital in the hands of an ever-shrinking minority continues to reach obscene levels while the majority of the world remains mired in poverty, bloodshed and crisis.

IN PICTURES:
'Colonialism is Doomed!' Poster Art from the USSR

“Sectarian” bloodshed in the Middle East, paramilitary massacres in South America, ribbon-cutting ceremonies for the latest superhighway, the endless clamor for war in the U.S. press – these sorts of events can only be properly contextualized in light of modern imperialism and capitalism. As Lenin said, “unless this is studied, it will be impossible to understand and appraise modern war and modern politics.”

Placing Lenin's study in a contemporary framework, Manila-based Institute of Political Economy in cooperation with IBON International has just released a collection of essays grappling with the various facets of imperialism for today's audience.

Titled, “Lenin's Imperialism in the 21st Century” and accompanied by a reprint of the original “Highest Stage,” the volume explores the imperialism of 2017 through eight in-depth chapters collecting essays from a range of scholars whose lives have been devoted to the revolutionary struggle against imperialism.

“We hope that this book contributes to a deeper understanding of the violent, destructive, dying system that is imperialism and inspire the advance of anti-imperialist, democratic and socialist movements to seize victory for the only lasting alternative to capitalism,” IPE Executive Editor Antonio Tujan, Jr. notes in the preface.

In the first essay, Tujan investigates “The Second Century of Imperialism” spanning the post-World War II boom to the present era of neoliberal “globalization” in crisis.

Using a wealth of data, the chapter lays out the rise and fall of neoliberal “free market” ideology and the state of permanent crisis it has entailed for the Global South, as well as the crisis of permanent war which has only grown more acute following the 2008 financial crisis, leading to global flashpoints which are drawing in U.S. rivals like Russia and China.

Quintos reinforces Lenin's conception of imperialism by examining the predatory role played by the flagship multinational corporations of the imperialist countries (Apple, Monsanto, Dow, Toyota, DHL, HP, Amazon and so on) and their ability to derive superprofits from low-wage workers in the underdeveloped Global South primarily through their supremacy over international production networks across the globe.

Quote from "New Forms of Exploitation of Africa by Monopoly Capitalism: From Lenin’s Imperialism to the Imperialism of the Triad in the 21st Century" | Photo: IBON International

Like many authors in the book, Quintos accompanies his analysis with an appeal for revolutionary systemic change.

“For Marxists, it is not a question of reinvigorating the 'developmental' state to tame the unbridled markets, which is as far as most anti-neoliberals are willing to push for,” Quintos advises. “Fundamentally it is about the working classes capturing state power, democratizing ownership and control over the means of production and transforming class relations towards socialism and ultimately communism.”

Demba Moussa Dembele's essay presents an African take on the current forms of imperialist exploitation in the continent. Examining Lenin's original formulation of monopoly capitalism as well as the works of African anti-imperialist Marxists Walter Rodney, Kwame Nkrumah and Samir Amin, Dembele details imperialism's litany of crimes against the long-suffering and subjugated peoples of Africa, which Dembele explains is currently seen as a “new frontier of global capitalism … (whose) resources are key to resolving the systemic crises of capitalism.” Dembele concludes that without peoples and governments prepared to resist imperialist military intervention, “the world may witness the recolonization of Africa.”

Two chapters are devoted to China. In Pao-Yu Ching's essay, she delves into the “new phase” of imperialism, which remains dominated by U.S. dollar hegemony and the U.S. domination of financial markets. Ching details distinct qualities of the present era, such as the internationalization of production and the creation of a new global capitalist class, before exploring China's integration into the world capitalist system following the 1979 “reform and opening-up,” its transformation into an emerging imperialist power, and its current relationship with rival imperialist powers.

Quotation from "The Current Phase of Imperialism and China" | Photo: IBON International

Fred Engst also examines the rise of China, posing various questions in the process: Does “globalization” render Lenin's theory of imperialism obsolete? Is state monopoly capitalism just a life preserver for a floundering global imperialism? Is the rising “State Capital Conglomerate in China” a socialist force, or the backbone of a new hegemonic power? What can we learn from the Cold War in regard to the approaching Sino-U.S. confrontation?

The health and fitness of the United States global empire is scrutinized by Roland Simbulan in his contribution, which casts a withering gaze on a United States desperate to stave off its hegemonic decline, using the still-potent range of tools at its disposal: economic, cultural (brands, media, ideology, academia) as well as its military assets, such as its formidable logistical capabilities (bases, infrastructure, troops) and “super-priced super-technologies of warfare.”

OPINION:
China and Trumpism: The Political Contradictions of Global Capitalism

Simbulan projects a fearsome depiction of U.S. imperialism, which engages in “murder and lawlessness around the world that would chill the bones of anyone who cares about justice, liberty and human rights."

“Lenin's contribution to understanding capitalism's tentacles in the global arena is scathing and effective in exposing and undressing U.S. foreign policy,” Simbulan notes.

“If we do not learn from this, we will continue to live in the specter of fear that our young generations will again face the prospect of being used as cannon fodder in inter-imperialist wars, in a war where there are no borders, and with destructive consequences that we can no longer just imagine, especially if nuclear war becomes the option.”

In Pio Verzola, Jr.'s essay, the past hundred years of conflict, rivalry, proxy wars and “regime change” interventions are presented as evidence of the correctness of Lenin's theory of imperialism. The paper primarily focuses on Lenin's “fifth feature” of imperialism: that global capitalism necessitates the division of the world among the great capitalist powers, spawning inter-imperialist rivalries and conflict.

Quotation from "A Century of Rivalries and Wars " | Photo: IBON International

Capping off the volume, exiled founding chairman of the Communist Party of the Philippines Jose Maria Sison's essay describes the future of a stagnating imperialism that continues to discredit itself with its ever-worsening recurring crises, while issuing an optimistic call to continue engaging in the building of a resurgent socialist project capable of leading the fight to decisively end imperialism.

“By going into various kinds of offensives, especially the neoliberal economic policy offensive and the neoconservative policy of full spectrum aggressiveness, the United States has incurred self-defeating costs and accelerated its strategic decline and has descended from being the sole superpower to being one of the major powers in a multipolar world,” Sison explained to teleSUR from Utrecht, Netherlands.

“We are still in the era of modern imperialism and proletarian revolution, especially because of the strategic setback inflicted by modern revisionism on the anti-imperialist and socialist cause,” he continued. “It is therefore of decisive importance to keep on studying and applying the theory of Lenin about imperialism as the highest and final stage of capitalism and as the eve of socialist revolution.”

“As a result of the ever worsening crisis of the world capitalist system and the ceaseless wars of aggression, the proletariat and people of the world are suffering intolerably from the ever-rising levels of oppression and exploitation and are driven to fight for national liberation, democracy and socialism against imperialism and reaction,” Sison continued, adding that this shows the need for “the study and application of the teachings of Lenin, especially in the less developed countries like the Philippines, Venezuela and the rest of Latin America.”

Note: To order a copy of the book, contact IBON International at i3d_bookshop@iboninternational.org. Paperbacks are US$5. New reprints of Lenin's original "Highest Stage" are US$2.