The death of Stephen Hawking on March 13 made headlines around the globe. The renowned theoretical physicist made invaluable contributions to scientific fields – including astronomy and physics – by building a bridge between academia and regular folk, writing popular bestsellers 'A Brief History of Time' and 'The Universe in a Nutshell.' He also gave countless talks and took part in scientific TV shows. 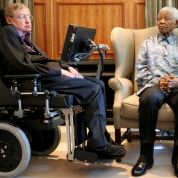 But, as a human being, Hawking was concerned not just with science, but also with justice and social issues.

Recently, he spoke about the dangers of artificial intelligence in a society that favors profit over common interest, and wrote regularly for The Guardian about contemporary social issues: "We can't go on ignoring inequality, because we have the means to destroy our world but not to escape it."

Hawking criticized the UK's decision to exit the European Union, arguing it would harm British and European scientific efforts: "We now recruit many of our best researchers from continental Europe, including younger ones who have obtained EU grants and have chosen to move with them here."

He has also been critical of the global economy, cautioning that technological developments are of no use without wealth redistribution.

During a Q&A on website Reddit regarding the automotization of production, Hawking made this lucid remark about the way 'progress' works: "Everyone can enjoy a life of luxurious leisure if the machine-produced wealth is shared, or most people can end up miserably poor if the machine-owners successfully lobby against wealth redistribution. So far, the trend seems to be toward the second option, with technology driving ever-increasing inequality."

Hawking will also be remembered for his support of the Palestinian cause against Israel's policies. In 2013, the British scientist announced he would comply with the Boycott, Sanctions and Divestment (BDS) movement in support of Palestinian rights, and refused to attend a conference in Jerusalem hosted by Shimon Peres.

Media initially reported that Hawking had canceled his presence at the conference due to health issues, but he later dismissed these claims and made clear it was a political decision.

In a letter written to former President Peres, Hawking said: "I accepted the invitation to the Presidential Conference with the intention that this would not only allow me to express my opinion on the prospects for a peace settlement, but also because it would allow me to lecture on the West Bank."

After receiving numerous calls from Palestinian academics and supporters of the BDS movement, Hawking changed his mind. "They are unanimous that I should respect the boycott. In view of this, I must withdraw from the conference. Had I attended, I would have stated my opinion that the policy of the present Israeli government is likely to lead to disaster."

Peres once held the Israeli Presidential Conference annually, with the presence of top world leaders, artists, scientists and academics in Jerusalem, and the 2013 conference Hawking boycotted was intended to mark the former president's 90th birthday.

Hawking's decision inspired many to support the movement, and Palestinian supporters of the BDS celebrated it.

"We think this will rekindle the kind of interest among international academics in academic boycotts that was present in the struggle against apartheid in South Africa," said Omar Barghouti, a founding member of the BDS movement.