All morning long, heads of state have been talking about some of the most complex and painful problems on our planet. Migration, climate change, the need for diplomacy, international economies, Syria, the Islamic State group and terrorism, the economic blockade on Cuba, and sanctions on Russia and Iran were all in most leaders’ check-box speeches, but one leader threw a curve ball. 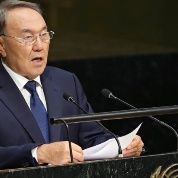 Nursultan Nazarbayev of Kazakhstan, right at the end of his speech, made a bold call that many may have missed unless glued to the live stream and taking notes: that we should move the U.N. headquarters, currently in New York, to Asia.

But would that be such a terrible idea? The U.N. has had its headquarters in New York since 1952, perhaps it’s time to give the other hemisphere a go?

Thinly veiled speeches by Obama, Putin, Xi and Rousseff on Monday, which will be followed by dozens more over the coming days, showed how deeply polarized the world still is along traditional East-West, North-South Left-Right lines. Much has been written about the handing of the world superpower baton from the U.S. to China, but can that happen if major international bodies, such as the U.N. are headquartered in the Global North and in a capitalist, Western nation?

More questions than answers, maybe. But perhaps, in an era of the Global South BRICS bloc and deepening Asian, African and Latin American regional integration to reduce dependence on the United States, Nazarbayev has raised one of the overarching questions we should be asking.

Hopefully terrorism, Syria, mass displacement of peoples and Cuba’s decades long isolation will be ended or resolved by 2052, when the U.N. building in Manhattan will turn 100, but while we may resolve those problems, the ongoing discrimination against peoples of the Global South may remain — despite the dwindling importance of so-called Western nations — perhaps thanks to the location of the world’s most powerful global institution, which claims to treat countries equally but, like a ball game, may treat the home team just a little bit better.