Sunday's second round of presidential elections will be the end of one of the most controversial elections in Brazil. On one side is Jair Bolsonaro a far-right former Army captain, who praises past dictatorships and champions a neoliberal economic model for the country. On the other side is Fernando Haddad of the Workers' Party (PT), a professor and former mayor of Sao Paulo and former minister of education during the government of Luiz Inacio Lula da Silva, who envisions a more just and equal Brazil. 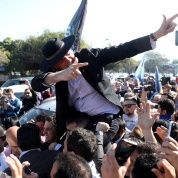 The presidential campaign has been marked by two main characteristics; an almost complete lack of political debate that has been overshadowed by an extreme surface of political violence that led to several killings. These two characteristics have been granted thanks to the leading right-wing candidate, who didn't show up to any of the presidential debates, and whose followers have killed several supporters of the left-wing PT party.

During the last weeks of the presidential race, Bolsonaro supporters verbally and physically attacked PT voters and even journalists, and threatened to harm members of the Supreme Court. Brazilians are afraid that violence will escalate no matter what the result is, but even more if Jair Bolsonaro wins, which according to polls is likely he will be elected.

Is Jair Bolsonaro's ideology fascist; are those who support him, contemptuously known as "BolsoMinions," fascists? "How far can these Hitler embryos go, influencing other young women in opinion formation?" Anthropologist Adriana Dias who has been investigating neo-nazism in Brazil for over a decade, asks these questions.

"The extreme right, wherever it comes from, is extremely dangerous for democratic processes and even worse for revolutionary democratic processes," said Pablo Meriguet Calle, a historian and master in sociology with a specialization in the study of the Anti-fascist movement. Calle added, "I think the recommendation that should be made is that it would be foolish to believe that because it is a fascist, we have to face it and because it is not fascist, it is not necessary to face it."

"Fascism in Europe emerges as one of the movements of the extreme right that emerges after the crisis of the liberal state of the nineteenth century, destroyed by the bloodiest war that the world had seen until that moment (the First World War). In addition to that, there is the emergence of the possibility that communism and socialism take power, specifically in Russia. Faced with a crisis of values of the liberal society and fratricidal war, fascism takes an impressive force. It is the expression of a crisis guided through the path of fear and prejudice, using aggression and violence, to exacerbate nationalism inward."

Meriguet said he "would characterize Jair Bolsonaro as "a character from the extreme right whose economic plan is not clear yet, I think it will be an aggressive neoliberalism, a neoliberalism without neoliberal ethics. With an absolutely repressive State to benefit the most powerful layers, but that is not necessarily fascism."

Doubtlessly Jair Bolsonaro means the consolidation of a new political model in which the usage of hatred and fear are paramount in order to generate political support, which doesn't necessarily means fascism. According to Meriguet, "by the electoral attitudes assumed by the movement led by Jair Bolsonaro, one could say that in technical terms he is not a fascist."

"However, a fascist is not simply determined by what he does before gaining control of the state or the executive power. Rather for what I could do next. Jair Bolsonaro if he is a fascist? I think it's still to be seen," Meriguet added.

However, "the important question to make is if the people supporting Bolsonaro are potential fascists. The important thing is to know if the people who support Bolsonaro would be willing to do things that attempt against democratic liberties. They incite a hate speech and that could cause a very serious crisis in Brazil."

"Bolsonaro's speech is openly intolerant and that can have very serious repercussions," in one of the world's countries with the highest inequality rates. "Not only that, but there are deep religious divisions. I am very afraid to think about religious divisions that could arise in Latin America if a discourse of intolerance to the other is promoted for sexual, religious, gender, etc. reasons. It is quite dangerous in a country as big and powerful as Brazil."

The far-right Brazilian candidate has been able to cluster an important amount of supporters, and a bigger number of people who would vote for him because he "has managed to channel a series of social frustrations that have managed to permeate society in Brazil and in Latin America in general. A feeling that has been successful thanks to the media."

It becomes paramount to also understand the role that Bolsonaro could have in the region. Sociologist Meriguet explains that "If Bolsonaro is capable of articulating an international vision of the extreme right, if he could make an international hub for the Latin American extreme right, in Brazil, that could have unforeseeable consequences, I mean real dangers of war."

Pablo Meriguet ends with the following conclusions and recommendations: "To be anxious about wanting to define whether it is fascist or not, to know if it is necessary to face it or not, could be the biggest mistake that this doubt has cost the Brazilian left. What you have to do against fascism is not to be afraid, and to be firm in what you believe and know that you are not alone. Fascism tends to make people feel isolated and precisely the anti-fascist struggle is to face isolation, and knowing how to join wills that could be faced at another time but survival is first."