According to the United Nations, there are about 370 million indigenous peoples in the world, occupying 20 percent of the Earth's territory. Other reports estimate they hold tenure rights or other kinds of administration to up to a quarter of the whole inhabitable territory. 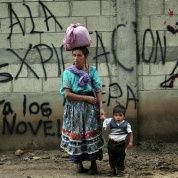 Environment and Development in Latin America

Taking into account there are about 7.4 billion people on Earth, aboriginal people own a considerable amount of territory in one way or another, at least on paper.

In reality, modern Nation-States usually don't respect international legislation on indigenous rights to self-determination and administration of their land. Rights to consultation, choosing their own ways of government, and respect for their ancestral land are often ignored, and the States put international legislation, and even their own, on the side. For governments, economic interests seem to weight more than an organized community protecting its forest.

As they inhabit some of the most bio-diverse and resource-rich land on Earth, indigenous groups often fall prey to transnational economic interests, represented in corporations that usually enjoy the support of governments, promoting large-scale projects hand-in-hand with notions of 'progress' and 'development.'

If a mining corporation is interested in the nickel found in a certain mountain in Guatemala, for example, it will partner with the state's mining company and start an economic venture with huge profits and an even bigger environmental impact.

The mountain might be on indigenous territory, which means the government would need to do a legal consultation with the people, according to the International Labor Organization's Convention 169 (C169), which guarantees their right to consultation and to choose their own political system. If the community says yes, it goes on. If they say no, the project doesn't go on. Of course, that's on paper.

That doesn't mean every indigenous group or individual is against large-scale “development projects.” There are also indigenous miners and loggers with different perspectives. The communities get involved in globalization, the international market and its economic conditions, creating a fertile scenario for such economic ventures.

Big mining projects come with a layer of workshops, polls and 'community work' aimed to convince residents of the benefits of having the project in their territory. Their websites full of promises, pictures of indigenous children sitting in fully equipped classrooms and others smiling because someone finally brought 'development' to their territory after decades of being marginalized by the government.

To bring an example, the San Gabriel Project in San Juan Sacatepequez, Guatemala, promises community projects such as s bakery, mechanic, and administration workshops, a reforestation program, support for local enterprises, a modern ring road and training programs for the ones willing to work with them.

But the price for development is a large cement plant that digs into their land.

As another persuasion tactic, the company also organizes talks in which employees present all the promising benefits to the community. Job opportunities, education, even health. For a community marginalized by the economic and political core of the country, despite being just a few kilometers away from the capital of Guatemala, this is tempting.

The communities of Sacatepequez, mostly of Mayan Kaqchikel origin, organized themselves against the plant, rejected the 'development' project and have resisted against it. But others decided to support it, with all the implying benefits. Now, a segment of the population is employed thanks to the project. The cement plant will give jobs to the people for a few years, and they will surely be grateful for that.

Companies take advantage of these internal divisions among communities to advance their own agenda, aided by supportive governments. The community of San Gabriel, supportive of the project, have been reportedly armed by the cement company and have attacked those who oppose it, with the complicit silence of the government.

Politicians use them as an example of indigenous people that want progress, as opposed to those who want to 'remain in poverty and marginalized.' Poor, of course, according to a western definition.

Dissent and resistance against the projects, from the ones that don't buy their narrative, is faced with criminalization. The leaders of the organizations threatened, murdered, or jailed under futile charges such as 'terrorism' (often related to damage of the company's heavy machinery or misunderstandings between local community law and the government's).

The communities in resistance against the plant are trying to use their last legal resource to fight for their land, the C169, but even this is ignored.

In Guatemala, the government is promoting a new law for the consultation of indigenous peoples regarding projects in their territory, aiming to comply with the legal formalities but actually undermining the right to self-determination.

The law draft proposed in Guatemala is supposedly “in agreement with the convention 169 of the international labor organization,” but it gives the State the right to decide what to include in the consultation and who to consult. That means the government could chose to ask a community that supports the project and ignore the other ones that oppose it, and still be legal.

It also prohibits communities to organize the consultations themselves, only allowing those coming from the vertical organization of the Nation-State.

Despite all these obstacles, if the communities still manage to reject the project in the consultation, the State keeps the right to make the final decision if it considers the cement plant, mine or hydroelectric project is of vital importance for the nation.

Isolated indigenous groups refrain from establishing links with mainstream society usually as a consequence of tragic encounters. After the Amazon rubber boom, which led to the extermination of an undetermined number of indigenous groups, individuals, cultures and languages, came mining, oil companies, loggers, livestock ranchers, and other ventures. Avoiding contact from groups that were historically aggressive comes as the natural thing to do.

The presence of indigenous groups, whether previously contacted or not, is the last trench against extractivism in places like the Amazon. Their existence prevents the legal entry of economic ventures in their territory, at least in countries such as Brazil, Peru and others to different degrees.

That's why they are the target of mercenaries, trying to take them out of the way of local and transnational companies that want to get their hands on natural resources. During decades, these mercenaries didn't doubt firing at them and burning their villages, and it took a long time for the rest of society to react against these acts.

But even though isolating could be enough to preserve their culture for some decades, the global capitalist mode of production still threatens their territory and its surroundings. Whether or not they are isolated from other societies, water pollution and climate change will still affect you to a certain degree.

Then come different policies to try and protect the groups and their territories. Some of them get it right, but others are terribly wrong.

In Peru, for example, the establishment of the Divisor Mountain Chain National Park and its “special zone” was heavily criticized by indigenous organizations that were already fighting for the recognition of the isolated groups inhabiting there.

Even though the brand new national park made conservationist groups happy, it still allowed extractivist activities within it and its buffer zone and failed to recognize the right to those natural resources by indigenous groups, both contacted and isolated.

But the struggle of indigenous groups in the area has paid off and the government is currently in the process of declaring most of the park an indigenous reserve, which would protect the culture and lifestyle of at least two isolated tribes of Isconahua and Mayoruna peoples, banning any other group or economic venture in the territory.

Conservation groups and environmentalists might have good intentions, but the structures in which transnational NGOs work hamper any real conservation effort. As Mac Chapin has pointed out, the big conservationist groups take on a different approach, focusing on pure “scientific” evidence and large-scale strategies, instead of the social realities of the communities. Anyway, these indigenous groups might oppose to projects promoted by foundations and companies with rather different objectives.

After all, how can a conservation giant such as the World Wildlife Foundation, Conservation International or The Nature Conservancy be independent if they are financed by Chevron-Texaco, Exxon Mobil, Shell International, Monsanto, USAID or the World Bank?