On March 30, 1976, thousands of Palestinians demonstrated against the Israeli government’s confiscation of 21,000 dunams (5,189 acres of Palestinian lands). The occupying country responded to the protest by killing six young Palestinians. 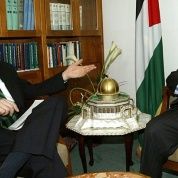 Since then, Palestinians all over the world commemorate March 30 as Land Day. Now, 43 years later, Palestinians are still protesting. Thousands of people have been occupying the frontier at the border between Israel and the blockaded Gaza Strip to demand the return of Palestinian refugees to the land from where they were displaced by the establishment of the state of Israel.

The 43 Land Day also marks the one-year anniversary of the Great March of Return which began March 30, 2018. In a year of weekly protests, more than 200 Palestinians have been killed by Israeli occupying forces.

But this persistent motivation behind such organized demonstrations comes in part as a rejection to the Israeli military blockade against Gaza that was imposed more than 12 years ago in summer 2007, just months after the United States and Israel orchestrated a Fatah-staged coup against the democratically elected Islamic Resistance Movement Hamas in Palestine.

Elliott Abrams, the convicted war criminal and the man U.S. President Donald Trump appointed to lead his regime change ambitions in Venezuela, was one of the masterminds of that very coup against Hamas that lead to the civil war between the two biggest Palestinian factions, the repercussions of which continue to be felt to this day.

Hamas was victorious in the 2006 legislative elections. This did not sit well with Israel and the U.S. due to Hamas’ pro-resistance agenda in the fight for Palestinian liberation, unlike Fateh's more compromising approach.

What ensued was a coup against a democratically elected government with U.S. backing -- much like the current situation in Venezuela. Not surprisingly, in both instances, Elliot Abrams has been the main man behind the scenes.

"There were severe fissures among neoconservatives over this," David Wurmser, a former Middle East adviser to the vice-president, Dick Cheney, said at that time, adding, "We were ripping each other to pieces."

Wurmser resigned weeks after the bloody clash between Fatah and Hamas started in 2007. The world powers started a discourse saying that this was a coup by Hamas.

"It looks to me that what happened wasn't so much a coup by Hamas but an attempted coup by Fatah that was pre-empted before it could happen," Wurmser said.

The 2006 Palestinian elections had challenged Bush’s Middle Eastern policy of having a pro-Western government in the region. When that was not achieved, the North American country and its ally Israel started channeling money and weapons to militias loyal to Fatah to train them for an armed coup.

Rice also sent an order to Palestinian President Mahmoud Abbas saying, "You should make clear your intention to declare a state of emergency and form an emergency government."

Meanwhile Abrams, an ardent pro-Israel diplomat, also met a group of Palestinian businessman and spoke for a need for a "hard coup" against Hamas. In a report on the events of the coup in 2007 by the Palestinian Chronicle, Palestinians who were at the meeting said Abrams was "unshakable" in his determination to oust Hamas.

The Palestinians suggested a more diplomatic approach to Hamas out of fear that a confrontation "would bring more suffering to Gaza’s already impoverished population, Abrams dismissed their concerns by claiming that it wouldn’t be the fault of the U.S. if that happened."

A leaked report by U.N.’s Middle East envoy Alvaro de Soto at the time of those events revealed that Abrams threatened after the Hamas election victory to cut U.S. contributions to the U.N. if it did not vote in favor of a suspension in aid to the Palestinian Authority by the Quartet, made up of the U.N., the U.S., the EU and Russia.

Hamas proved resilient and held its ground after the group fled to Gaza and formed their own government there. However, the Bush administration was not happy.

They tried to lure Palestinians to rally behind Fatah in a three-fold plan: by giving a three-month amnesty for 178 so-called militants in the West Bank, by releasing 250 prisoners out of 11,000 and by providing US$190 million in aid, which was mostly recycled from already allocated non-disbursed aid.

Abrams' planned Palestinian conflict between the two most powerful and popular factions in Palestine continues to this day with no feasible solution in sight.

The brutal military blockade by Israel and Egypt on the Gaza strip is a direct result of the coup as it was imposed on the Palestinian territory after Hamas set up its government there in defiance of U.S. and Israeli wishes. The civil war between Hamas and Fateh succeeded mainly in sewing division among Palestinians themselves, weakening their efforts of resistance and struggle against the Israeli colonial machine.

But such turn of events is far from surprising considering Abrams' pro-regime change history.

Abrams, after intervening in Central America in the 1990's, turned his focus to the Middle East. He was one of the main people behind U.S. invasion in Iraq in 2003 which saw the overthrow of Saddam Hussein, the destruction of much of the country, and the death of hundreds of thousands of Iraqis as a direct result of the war.

Abrams was also behind the Iran-Contra scandal during U.S. President Ronald Reagan's administration in the 1980's where the U.S. illegally sent arms to anti-Sandinista militias in Nicaragua to overthrow the government. He was later convicted for lying to the Congress about his role but was later pardoned by President Bush.

His first high-profile position started with the Ronald Reagan administration in the 1980's when he ensured military aid to the Guatemalan dictator Efrain Rios Montt, who came to power after a coup in 1982 and was later sentenced for genocide against the Mayan peoples in the Central American country.

He was also one of the masterminds behind the 2002 coup attempt against Hugo Chavez in Venezuela. Recently, he was appointed to lead the U.S. intervention in Venezuela against the leftist government of Nicolas Maduro in an effort to install a U.S.-backed right-wing politician named Juan Guaido.