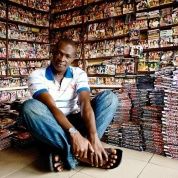 Over the last 20 years, Nollywood’s indomitable rise accounts for more than 1.4 percent of Nigeria’s GDP, which amounts to US$7.2 billion, according to the Oxford Business Group. With some 1 million people working in film (including distribution and screening), it is the nation’s second largest employer after agriculture. Furthermore, the CEO of the government-owned Nigeria Export Import Bank, Robert Orya, said this year that Nollywood generates at least US$590 million annually, behind only Hollywood and Bollywood. He also explained that Nollywood, which is the largest and most profitable film industry in Africa, will play an important part in the continent’s projected 5.2 percent growth for last year.

Despite these advances, Nollywood still has a little catching up to do with its U.S. and Indian counterparts. While Nigeria produces twice as many professional films as Hollywood each year (some 2,000, according to CNBC Africa), it is far behind Western countries and Bollywood in terms of box office revenue. Nigeria has just 100 screens (in just a few dozen movie theaters) to the U.S’s almost 40,000, according to UNESCO, and as a result most of the movies go straight disk, selling for US$1-2 in a market whose material is 90 percent pirated.

It's easy to look at Nollywood cinema and its lo-budget/no-budget aesthetics, and immediately dismiss Nigerian film industry product as a contender on the international marketplace … but that's changing...

But that is changing. It has been widely noted that the industry's films are improving in quality and garnering higher budgets; the number of films shown in movie theaters before going to DVD is also growing. One of Nollywood’s premiere streaming sites, iRoko, became subscription only in 2014 (it was previously free), in a bid to boost the industry. Then there’s high-profile industry events, held in international venues: even in Hollywood. Finally, 2015 has seen the big transition from Nollywood-specific streaming sites to the multimedia international Netflix.

The audience for these films is already immense: Nigerian Actor Michael Adegoke told AFP that some 20 million people watch Nigerian films worldwide, "Nollywood is very big, and they are pretty much expanding to USA … It’s in London, it’s in USA, it’s in Belgium, Holland, France," Adegoke said.

To give an idea of budget for Nigerian films compared to their U.S. counterparts, the UK-Nigerian "Half of a Yellow Sun," with its budget of some US$10 million, is likely the most expensive Nigerian film ever made. The U.S., on the other hand, can pull in investment in films to the tune of US$400 million for a single film. Variety online says that “Half of a Yellow Sun” was 80 percent financed by Nigerian investors, a statistic that makes African diaspora cinema website, Shadow & Act, excited:

“While the infrastructure may not yet be there to handle a full-scale Hollywood-style production, the money most certainly is. It's easy to look at Nollywood cinema and its lo-budget/no-budget aesthetics, and immediately dismiss Nigerian film industry product as a contender on the international marketplace … but that's changing as Nigerian filmmakers in Nigeria and outside of the country, continue to push for films that can compete globally, and as international productions like Half Of A Yellow Sun … are made in Nigeria, hiring mostly Nigerian crew (about 60 percent in this case), who get the experience of working on a full-scale, high-budget feature film production - experience that should have some impact on future productions, and that might make the country more attractive to international productions, for better or worse…”

In light of Nollywood’s success, amid criticism that the government was not doing enough to support the industry, Nigeria’s government announced in January 2015 that it was time to step in to help this now-indispensable sector. The Ministry of Finance’s press release explains “Project ACT Nollywood” will provide US$10 million toward an Innovation Distribution Fund “aimed at improving the distribution of audio-visual content, cut down on piracy, and to better protect intellectual property in the industry,” while a US$1.5 million Capacity Building Fund will go to industry practitioners “to update their technical skills through foreign and existing private Nigeria-owned institutes that offer training courses, program and technical certification in the movie industry.” A separate fund is going to boost private film schools around the country in order to offer more in-country training. Meanwhile, the Film Production Fund will co-finance “commercially viable film projects” with grants of up to US$50,000.

Hopefully, you'll want to dive headfirst in to Africa's premier film industry, but be aware that others are hot on Nollywood's heels and should not be overlooked. Ghana’s Ghallywood is as established, if not as big as its neighbor. But the new kid on the block is Wakaliwood; violent, action-packed films made in Uguanda's Wakaliga slum. Watch Wakaliwood's most famous film — Uganda's first ever action movie, according to its publicity — “Who Killed Captain Alex,” below.

This article is part 1 of a 3-part article on Nollywood, in teleSUR’s “The Other Side of Africa” series. Click here to read “Nollywood: A Primer,” and here to read an interview with Nollywood screenwriter Vivian Chiji.