As the 2019 Cricket World Cup gets underway, we remember the iconic documentary “Fire In Babylon” that provided cricket fans with an insight into how the sport has shaped Caribbean identity and began to mold what some would call an anti-colonial national project. 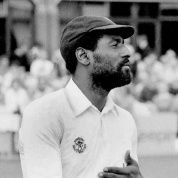 One of the glory periods in the history of West Indies cricket was the generation of players during the 70s and 80s that revolutionized the nature of the game, and in the process, were forced to rebel against the racial politics of cricket at the time. During that period, the West Indies team dominated the sport for over 15 years through new techniques such as aggressive bowling that left batsmen reeling at balls flying close to their face.

Until then, successive English teams had faced the West Indies with arrogance but were now left angry and confused after heavy defeats to those they assumed to be their inferiors. Gordon Greenidge, a key figure of a generation opens the documentary explaining the significance of the West Indies’ success.

“You’re speaking about a group of black guys being successful, for a period of time people couldn’t imagine it possible”. Support for the team even became an act of rebellion for Black Britons, with many attending matches to cheer on the victories the West Indies as a source of Black pride amid an atmosphere of intense racism in Britain against the first of the ‘Windrush generation’.

Greenidge illustrates how the success of the 70s and 80s generation had ramifications off the pitch too.

When Trinidadian Marxist CLR James wrote ‘Beyond a Boundary’, considered the seminal book on cricket culture, he opens with the famous phrase “What do they know of cricket who only cricket know?”, (a reply to Kipling's colonial adage “What should they know of England who only England know?"), in that he meant that one cannot understand cricket purely by what happens on the pitch, one must understand the social contexts and contradictions that produce such changes in culture on the field. In this case, the context was the early years of independence across most of the Caribbean, along with the US civil rights movement and the anti-colonial struggles across the global south.

"Fire in Babylon places the dominance of that West Indian generation as embodying the values of those wanting to assert a dignified and anti-imperialist identity amid frustrations during the early years of independence. One of the stars of the period, Colin Croft, speaks in the documentary about how the success of the team relied on that generation shaking off received wisdom passed down by the English, saying “The teams from before were still subservient to the English, still listened to what the English had to say about their own game”.

The building of a successful West Indian style went hand in hand with the growing confidence of anti-colonial and civil rights movements of the period.

Parallel to this, the period also illustrated what CLR James believed to be the central role of Cricket in building a unified and anti-colonial Caribbean identity, to overcome fragmented ‘island mentality’.

Unlike other sports events, the West Indies don’t compete as individual states but on a pan-Caribbean basis. No one embodied this spirit more than Captain Clive Lloyd who claimed to be guided on and off the pitch by the maxim, “One People, One Nation, One Destiny,”, a version of Marcus Garvey’s Universal Negro Improvement Association’s motto.

Beating the English at their own game and overcoming the ‘calypso cricket’ stereotypes caused huge consternation amongst the English.

The documentary shows how British commentators attempted to delegitimize the West Indian style, labeling it unsportsmanlike against the spirit of the game. Nevertheless, the West Indies left an indelible mark on the sport, a number of new terms began to spring up, most famous of which was the ‘blackwash’.

In cricket, when a team sweeps a test series it’s called a ‘whitewash’ by commentators, but when the West Indies finally managed it against England in 1984, it became characterized as the ‘Blackwash’. Reggae star Bunny Wailer characterized that victory in more explicit terms, saying that it was, “slaves whipping the asses of masters”

Fire in Babylon remains one of the most important and moving documentation of cricket’s political and cultural history. One doesn’t need a knowledge of the sport to enjoy watching the 70s/80s generation “whipping the asses of masters”, or to understand the insights it provides into the relationship between sports and social struggle, during a crucial moment in the history of the civil rights and anti-colonial movement.

The West Indies team of today is not quite the team of Viv Richards and Clive Lloyd, and cricket, like most sports, has undergone a depoliticization that often goes hand in hand with corporate sponsorship. Nevertheless, Fire In Babylon remains crucial in understanding Cricket and its role in Caribbean politics and identity.