While Fidel Castro is known as a committed internationalist, supporting independence movements in Angola to South Africa, Nicaragua and even French Polynesia, less is known about his support for the Irish struggle. 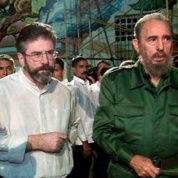 ANALYSIS:
Fidel's Favorite Book and Why You Should Read It

But in 1981, when Irish Republican prisoners were in the midst of a historic hunger strike against the British state, it was Fidel who once again sided with the oppressed.

The hunger strike was the culmination of a five-year battle between Irish nationalists and British autocracy, sparked after Margaret Thatcher, then-U.K. prime minister, stripped the republicans of their political prisoner status.

What followed was one of the most fierce and fatal political standoffs in British history.

Led by Bobby Sands, officer of the Provisional Irish Republican Army, one by one the prisoners began to refuse food.

Ten hunger strikers, including Sands, died from starvation. Riots broke out across Northern Ireland. Tens of thousands protested in outrage. But Prime Minister Thatcher was unmoved.

"We are not prepared to consider special category status for certain groups of people serving sentences for crime. Crime is crime is crime, it is not political," she said.

Her views were echoed by most Western leaders — but not by Fidel Castro.

IN DEPTH:
Fidel: A Revolutionary Life

The Cuban revolutionary met with Sinn Fein leader Gerry Adams in 1981 and spoke passionately about the Republican cause.

“In speaking of international politics, we cannot ignore what is happening in Northern Ireland. I feel it is my duty to refer to this problem. In my opinion, Irish patriots are writing one of the most heroic chapters in human history,” he told the audience of Republicans.

“They ask only for something as simple as the recognition of what they actually are: political prisoners … Let tyrants tremble before men who are capable of dying for their ideals.”

As a sign of solidarity, Sinn Féin leader Gerry Adams traveled to Cuba that same year and unveiled a monument to the 10 deceased hunger strikers.

Today, Adams is once again in Cuba — this time to pay tribute to another fallen hero.