The Federation Internationale de Football Association, commonly known as FIFA, and its corporate sponsors have marketed their products to the members of the lesbian, gay, bisexual, and transgender community for years presenting themselves as allies and advocates for their struggles. Coherence with that marketing scheme would have meant refraining from holding the 2018 World Cup in Russia and giving the rights to the 2022 event to Qatar. 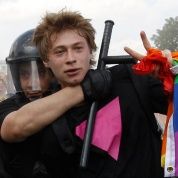 RELATED:
A World Cup Without Immigrants? Here's What Your Favourite Teams Would Look Like Without Them

At the very least, it should mean demanding legal reforms to make these countries legislations compatible with FIFA’s statutes, which prohibit discrimination of any kind and establishes the organization's commitment “to addressing discrimination in all its forms.”

It wouldn’t be unprecedented.

In more recent examples FIFA forced Brazil to overturn the ban on selling beers in stadiums on behalf of Budweiser ahead of the 2014 World Cup, and when it got South Africa to set up dozens of “instant courts” ahead of the 2010 World Cup to prosecute petty crime.

These type of pressure could have been used in Russia and Qatar to push for LGBT rights, however, FIFA and the cooperations which support it didn't use their sway over the host for that purpose.

The conversation now has been focused on whether or not is safe for LGBT football fans to go to the 2018 World Cup in Russia.

Those who are weary argue Russia’s 2013 law, which prohibits “homosexual propaganda” aimed at children, should be a source of concern because it sets fines, prison terms, and deportation for anyone who breaks it. According to LGBT activists, the law is so broad that holding hands in public could be considered propaganda if a child witnesses the hand holding.

Russian authorities have dismissed this interpretation.

Last November a Russian Football Union official said “you can come here and not be fined for expressing feelings. The law is about propaganda to minors.”

Despite the clear clarification Football Against Racism in Europe (FARE), which partnered-up with FIFA to implement a monitoring system in World Cup matches, has issued warnings to LGBT fans, urging them to refrain from public displays of affection.

The English Football Supporters’ Federation stated in May “although same-sex sexual activity has been decriminalized in Russia since 1993, it is strongly understood and advised that you do not publicly display your sexuality.”

Perhaps it is not the “homosexual propaganda” law that raises concerns among World Cup tourists but pervasive homophobia in Russia. One poll reported that 90 percent of Russians supported the legislation in 2013, and since it was approved LGBT rights organizations have reported a surge in homophobic attacks.

The European Court of Human Rights had foreseen this when it said the law “reinforced stigma and prejudice and encouraged homophobia.”

Despite state policies that encourage homophobia year round Joe White, who runs campaigns for Pride in Football told PinkNews the World Cup is providing the LGBT community a rare chance to promote their visibility in the country.

So far, it is debatable whether or not that is true since the footballing world could have this conversation without placing the World Cup tourist at the center.

In 2017 there were several reports of an anti-gay purge in the Chechnya republic, in Russia. The purge was condemned by human rights organizations like Amnesty International and Human Rights Watch. Despite these actions, FIFA accepted Russia's bid to host the tournament.

Discrimination against LGBT people in Russia did not deter FIFA from awarding it the World Cup or making Grozny, the Chechen capital, one of the World Cup training sites. Additionally, FIFA has said nothing about the conservative Cossacks militias, who are openly hostile to LGBT people, helping Russian police control the crowds at the World Cup.

ANALYSIS:
Russia Confronts History of Racism in Football as It Hosts World Cup

Local LGBT activist Jonny Dzhibladze of the Coming Out organization in St. Petersburg suggested foreign LGBT fans will be treated well, “but as soon as they leave, we return to our traditional Russian values."

A Diversity House, a safe space for LGBT football fans to watch the matches, in Moscow was shut down after the building's owners terminated their contract.

On opening day, Peter Tatchell, a British LGBT activist was detained in central Moscow for criticizing the laws and was later released. He has since left the country.

Tatchell is not alone in calling out Russia's his social conservatism and animosity towards the LGBT community.

For us seeing two men rolling in the grass, a man crying for another, walking around with another man’s genitals on their neck is normal, the video continues. “Mr. Putin, for you love between men is an illness. We are very ill. And you know what? It is very contagious.”

The ad wasn’t aired, but it was shared through social media.

Not all criticism is fun. The head of Russia's LGBT Sports Federation Alexander Agapov recently told the AFP the World Cup might have made the homophobia worse by playing into anti-gay propaganda. “By emphasizing the safety of foreign LGBT fans, authorities have managed to present homosexuality as something foreign, un-Russian,” Agapov said.

It’s not only Russia. LGBT football fans will also have to face hostilities if they decide to go to the 2022 World Cup in Qatar, which has laws punishing LGBT people with one to three years in prison.

Having a monitoring system in place, partnering-up with an LGBT organization, or setting up a hotline for fans in distress and online complaint mechanism is not enough. All of these things do not assure fans who fear they could be attacked outside stadiums or locals who worry things could get worse.

The only sufficient policy would be for FIFA to uphold its stated commitments and statutes and refrain from holding the World Cup in countries where vulnerable groups are openly targeted.

Just like concerts by international entertainers in Israel help to whitewash its crimes against Palestinians, holding the World Cup in Russia and Qatar help to normalize these countries policies against the LGBT community.

FIFA and its sponsor are sending a worrying message: you can persecute minorities with no accountability as long as the tourists are safe.