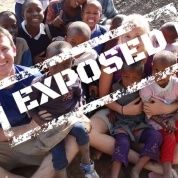 * Last year, World Vision announced its decision to finally stop discriminating and hire LGBTI people. However, after the announcement saw sponsors withdraw donations – apparently more concerned about people's sexuality than hunger, the decision was reversed and the organization continues to bring homophobia to the African continent.

* Its president, Richard Stearns, studied business administration and began his career doing marketing for several Fortune 500 companies. His wage with World Vision is almost US$400,000 a year. He has blamed poverty as often being a result of “fathers that aren't around ... Boys learn from their fathers what it means to be a good man.”

* Its publicity continues to be children-centered, simplistic, and individualistic. It tells little fairy tales: “In a nearby poverty stricken village … Mona, 11 years old, is teaching her brother a song, because Mona believes it doesn't take much to live happily … with $39 Canadian dollars we can help people like Mona.” Cameras angle down at big-eyed children with one name and an easily digestible story of suffering, easily cured with money and religion.

* An individualistic approach to a systemic problem. Donors choose the child they want to sponsor from a range of photos. This has many implications for the children, who become competitive with their friends who are chosen for sponsorship. The donor has the power to decide who will be more prosperous.

* In 2013, Save the Children and Britain's biggest drug manufacturer GlaxoSmithKline joined hands, with GSK aiming to give the charity 15 million pounds (US$23.6 million). GSK pleaded guilty in 2012 to healthcare fraud, which involved promoting drugs, such as anti-depressants, for unapproved uses. It also fights to protect the patents of its HIV medicine, for example, which was developed using public funds, at the expense of affordable medicine.

* Like World Vision, the CEO of Save the Children, Carolyn Miles, also has a business and marketing background. In 2013 she was paid US$407,399.

* In 2014, war criminal Tony Blair was given Save the Children's Global Legacy Award at a gala dinner in New York. Funnily enough, the year before, former adviser to Tony Blair and current Save The Children chief executive Justin Forsyth was among nine at the charity awarded US$250,000 in bonuses.

* In 2013 a whistleblower accused the charity of self-censoring criticism of energy corporations, such as British Gas, for fear of upsetting existing or future donors.

* A racist gem from USAID administrator Andrew Natsios, who was quoted in the Boston Globe in 2001 as saying Africans wouldn't be able to successfully take HIV and AIDS treatment regimes because “Africans do not know what Western time is.” He allegedly said that many people in Africa "have never seen a clock or a watch their entire lives and if you say one o'clock in the afternoon, they do not know what you are talking about.”

* Last year USAID joined with real estate company Rockefeller to launch a US$100 million “climate resilience fund” for Asia and Africa, with the vague aim of making communities more resilient to disasters. The alternative could have been policy that reduces the U.S’s huge contribution to contamination and global warming: but that would affect profits.

Charities … as simple as white people's individual goodness. They become saviors, while the denial of complexity, the simplistic advertising dehumanize and rob people in Africa of their dignity, agency, intelligence, and power.

* USAID has partnered with Monsanto to promote “biotechnology,” or genetically modified organisms. It launched the Agricultural Biotechnology Support Project in 1991 to introduce GM crops, which benefit patent-holding companies like Monsanto and works to create dependence on U.S. corporations' fertilizers and pesticides. USAID has invested millions in “biotechnology” in countries like Nigeria and Uganda and uses workshops on GMOs and other issues to promote policy change favorable to U.S. corporate interests.

* USAID's slogan, “from the American people,” should be, “from U.S. corporations,” as it once claimed on its own website, “... the principal beneficiary of America’s foreign assistance programs has always been the United States. Close to 80 percent of the USAID contracts and grants go directly to American firms,” Grain.org reported. The USAID site also states that the organization works to promote “democratic” institutions (even though the U.S. is no model of democracy) and to “foster an environment attractive to private investment.” With its bureau for Africa located not there, but in Washington, D.C., Andrew Herscowitz, coordinator of the bureau, describes his position as “facilitating private investment to bring cleaner energy and electricity to millions across Africa.” Apart from the fact that that is another thing that the U.S. itself needs, its also another example of taking advantage of colonialism-caused lack of infrastructure to help companies make profits.

* Many governments find it hard to stand-up to USAID, as it functions as a mouthpiece of the powerful, warmongering U.S. Grassroots organizations, however, are often more willing to resist.

* Despite being the food assistance branch of the United Nations, and allegedly more neutral than some other charities, the WFP has corporate ties, and is problematic in similar ways to other charities

* It cooperates with USAID, Save the Children, and receives significant donations from Monsanto. In 2011 for example, the WFP held a donation drive in which each dollar raised would be matched by a dollar from Monsanto. Monsanto however, contributes to world hunger by making farmers dependent on their seeds and with destructive agricultural practices.

* WFP overlooks the role of big business in exploitation and causing poverty, instead promoting the private sector's role in the so called elimination of hunger. It is part of the Alliance for Food Security and Nutrition, which was formed in 2012 to facilitate private corporations' profiting from hunger and as excuse for the rich nations to wash their hands of any responsibility.

* WFP states on its website, “Cause related marketing generates support and awareness for your business ... presenting a unique opportunity for companies to simultaneously do well and do good.” Other WFP corporate partners unqualified to fight hunger include Pepsico Foundation (objectifies women and spent US$1.7 million in opposing U.S. citizens' right to know if food is genetically modified), Bank of America (2008 financial crisis) Yum (parent company of fake food restaurants KFC, Pizza Hut, Taco Bell), Caterpillar (proud demolisher of Palestinian homes), and Cargill (energy trading, crops and livestock: no self interest here, has had to recall a lot of its meat products for contamination, sued for extreme child exploitation on its cocoa bean plantations).

* Similar images such as this one using victimized, helpless children, and empowering the Western savior – “you can save lives.”

* Kenyan economist James Shikwati argued that WFP food aid was sometimes so big that it made it hard for local farmers to compete.

* The Clinton Foundation uses poverty in African countries as a public-relations tool for the families' politicians and for the celebrities who donate to it. It focuses on health systems, not that Bill Clinton was able to do much for health in his own country: a reoccurring story with many charities. The charity is also used to foster business deals. The Clintons and celebrities conduct fly-by visits through African countries as a kind of ego parade of people pretending to care, with all attention on the “helpers” and none on the people of those countries.

* Earlier this year, the charity came under fire for not declaring tens of millions of dollars in foreign donations and in another unsurprising scandal this year, the Clinton Foundation worked closely with a pharmaceutical company to distribute “drastically substandard” antiretroviral drugs to third world countries that had no chance of helping HIV and AIDs patients, according to a Wall Street analyst.

Get Angry: Global Inequality Should Be Changed, and Charity Isn't the Way

The thing about aid is that it always comes with conditions (working with businesses, practicing religion, spending money according to the dictates of the charity), it always involves the inequality of a much more powerful giver and a disempowered receiver, and it involves the powerful side thinking it knows better that the receiver about what they need and how to make that happen.

There's little respect and a lot of condescension, as the boring rich try to show people in the apparently homogenous continent how to make wells, read the bible and make their own shoes. And, largely due to charities, the continent of Africa has become synonymous with poverty, starvation, tragedy – a homogenous blob of a continent of begging skinny children.

Charities simplify everything. They misinform. Solving poverty (which on the continent of Africa was due to the looting, interventions, social and economic colonization, and the constant stealing of local resources by those countries who tend to set up the charities in the first place) is as simple as white people's individual donations. They become saviors, while the denial of complexity, the simplistic advertising dehumanizes and robs people in Africa of their dignity, agency, intelligence, and power.

Charities become competitive for money and are forced to convince their public they are dealing with the “most needy” and “deserving”. The advertising is never accountable to those people objectified by it.

Charities like the Clinton Foundation don't deserve a pat on the back for given back a tiny proportion of what was stolen by the U.S. and Europe and their transnationals in the first place. Even less so when using poverty to dodge tax payments. Ultimately, such charities are a convenience for first world governments to outsource their social and political responsibility.

Unlike activist organizations, charities are undemocratic, alienating (donors are very disconnected from affected communities), and work over rather than with those communities. The big picture is the North (U.S, Europe, U.K, Australia, etc) has an undemocratic influence over the economies, resources, culture, and futures of countries in Africa – in addition to such influence through colonization, transnational resource robbing and so on already mentioned.

RELATED: More teleSUR analysis on The Other Side of Africa