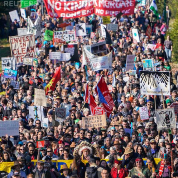 They were demonstrating against the Energy Transfer Partners (ETP) construction of the 1,880 km Dakota Access Pipeline (DAPL) on their territory.

The tribe said they were never consulted on the pipeline's re-route from Bismarck into their sovereign and sacred lands. The Standing Rock feared the line would leak crude into their main aquifer, Lake Oahe, part of the Missouri River.

From March 2016 the Sioux, who would be joined by over 300 other Indigenous 'water protectors' and international allies, set up camp on the North Dakota prairie to resist the pipeline despite government food blockades, massive arrests, police dog and water cannon attacks well into the frigid Midwest winter of that year.

As soon as he took office in January 2017, U.S. President Donald Trump decreed the DAPL be finished. It has been up and running (with leaks), extracting over 1.2 million barrels of crude oil per day, since October of last year.

The Dakota pipeline isn't North America's biggest or most expensive, but the protests were among the largest and longest Native American demonstrations in modern U.S. history. Indigenous protesters used their bodies – in situ – to protect their land and basic civil rights.

Not since the early 1970s has mainstream media reported so extensively on such an example of resistance. Not since that time has much of the North American public been willing to acknowledge the racism and inequality embedded in their region.

To commemorate International Day of the World's Indigenous Peoples on August 9, teleSUR highlights the injustices of two other major North American pipelines in the works: Keystone XL and TransMountain.

Even though the DAPL was eventually erected, the Standing Rock example of using the courts and physical presence to block a multinational extractive project has galvanized other First Nations to resist in the same way the XL and TransMountain pipelines.

The pipeline, which is phase-four of the Keystone Pipeline System, has been partially operational since 2010. If completed, it could carry 830,000 barrels of crude bitumen oil per day some 1,880 km from Alberta, Canada, into Nebraska, snaking between several Native American reservations en route.

This US$8 billion TransCanada Corp. bitumen project can emit up to 20 percent more carbon than traditional crude. It was called off by the Barack Obama administration in 2015, citing climate change, but only after years of protests by Indigenous, ranchers and environmentalists.

Trump reinstated its construction in January 2017, just days into his term.

Like the Standing Rock in the DAPL case, the Indigenous Environmental Network and the North Coast Rivers Alliance sued the government in a Montana federal court on the basis that the newest XL pipeline route hasn't been environmentally assessed by the State Department. The case is ongoing.

Indigenous organizers are also evoking Standing Rock to gain support for their upcoming protests: "We do expect resistance camps along the path of the Keystone pipeline," said Dallas Goldtooth, a Network leader, in a letter after Trump approved the pipeline.

"We hope that everyone around the world who stood with Standing Rock... will continue to stand with us and all the tribes as we continue to fight these dangerous and short-sighted infrastructure projects that serve only the interests of billionaires," Goldtooth said.

Last month, TransCanada told the Cheyenne River Sioux and several other First Nations in a letter that the company is preparing to place machinery along the pipeline's route for a 2019 construction start date.

"We will be waiting," responded Cheyenne River Tribal Chairman Harold Frazier, who also protested with the Standing Rock. William Kindle, Rosebud Sioux Tribe president, said his tribe was in "unified opposition" with the Cheyenne against XL.

Canadian politicians, Prime Minister Justin Trudeau among them, fear the TransMountain pipeline – already referred to as the Standing Rock to the North and set to run from Edmonton, Alberta to the coastal town of Burnaby, British Columbia – will become another Standing Rock.

In November 2016, at the height of Standing Rock and just as Trudeau approved a 980 km expansion to the existing 1947 pipeline, advisors to the prime minister sent him a 'secret' memo.

"Following the recent approval of the TransMountain Expansion Pipeline, a number of Indigenous stakeholders have drawn parallels to Standing Rock, indicating that there would be similar protests if TMX goes ahead," the memo read.

Indigenous peoples have since protested TransMountain in situ, just as they did the DAPL.

Kanahus Manuel, of the Secwepemc First Nation, spent months as a Standing Rock 'water protector' until she was arrested in July.

She was charged with criminal mischief for erecting 'tiny houses' with several other members of her tribe in a provincial park in British Columbia the pipeline is set to go through. Together, they say the expansion violates their land rights and the health of the environment.

"Everything flows from the land," Manuel told the Intercept in July. "If the land is destroyed, we are also destroyed and that's why we'll stand so fiercely in defense of this land."

The original TransMountain line has already registered 81 oil spills since 1961.

Manuel and other Secwepemc resistors, or 'Tiny House Warriors' as they call themselves, are also blocking the pipeline's pathway through Canada with several 2.5 x 3.5-meter houses before construction begins on August 25.

They are not alone. On July 13, seven protesters rappelled from the Vancouver Ironworkers Memorial Bridge to block tanker traffic from the existing TransMountain line.

The line is expected to increase sevenfold through these waterways if the new portion is completed, according to the Globe and Mail.

Another ten people, among them 70-year-old B.C. resident Laurie Embree, were sentenced to seven days in jail after they halted Kinder Morgan operations by blocking access to one of its Burnaby oil stations.

Will George, a member of the Tsleil-Waututh Nation, told media in March: "We should be at the table. We should be discussing these matters that go through our traditional territory. By not having us there, it says a lot."

George and others built a traditional Coast Salish Watch House on Burnaby Mountain to monitor the pipeline's construction.

Such Indigenous efforts are paying off: partly because of their protests, the TransMountain is experiencing significant permit delays.

Kinder Morgan, the Texas-based company behind the project, suspended all non-essential operations on the now-anticipated US$7.2 billion project last March, afraid it wouldn't come to fruition.

By July, the company had all but abandoned the project, which was then a year behind schedule. Trudeau then announced the Canadian government would buy the line by September of this year in order to resell it.

Jeffrey Monaghan, assistant professor at the Institute of Criminology and Criminal Justice at Carleton University in Ottawa, told the Intercept: "What worries them is actually that these social movements are being extremely successful at swaying public opinion and asserting Indigenous land claims."

The United Nations, which introduced the International Day of the World's Indigenous Peoples in 1994, says: "Indigenous peoples have sought recognition of their identities, way of life and their right to traditional lands, territories and natural resources for years, yet throughout history, their rights have always been violated."

These major pipelines – and the major Indigenous protests they prompt – are history being repeated.

At a rally against the pipeline in Burnaby, B.C. in April, Paul Wagner, a member of the Saanich First Nation who lives in Redmond, Washington, told a Canadian newspaper: "That pipeline will never go through... The people are rising up."