Their electoral successes have grown in countries such as Brazil, Colombia and Chile, and more recently in the presidential elections in Costa Rica. Driven by the moral crisis of politics, this religious community has grown in votes in Latin America, primarily through their opposition to same-sex marriage, abortion and the legalization of marijuana. 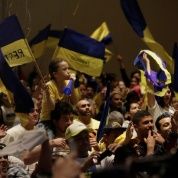 Fabricio Alvarado, the evangelical preacher, and candidate of the conservative National Restoration Party finished first in the presidential elections held on Feb. 4 in Costa Rica. With more than 24 percent of the votes, he goes to the second round of the elections, which will take place on April 1, in the lead.

His resistance to the call of the Inter-American Court of Human Rights to guarantee the equal rights of LGBTI people (lesbian, gay, bisexual, transgender and intersex) won the support of the nearly one-quarter of the electorate who voted.
The growing influence of the evangelical movement in electoral politics could be a threat to progress in terms the rights of the LGBTI community.

Morality is the banner of evangelicals in politics, with their campaigns based on opposition to the recognition of the rights of the LGBTI community as well as their rejection of any initiative that would decriminalize abortion.

"The credibility of the political class in Latin America is on the ground, politics is seen as a dirty business by the great mass of the population, and many representatives of the evangelical churches (and also of the Catholic Church) react with moral appeals," said Thomas Wieland, head of the Projects section of the German Episcopal work Adveniat, in an interview for the Deutsche Welle news agency.

The rise of evangelicals in Latin American politics is evidence, for example, in Brazil - one of the countries that have seen the sharpest rise in the number of evangelicals.

Twenty-two percent of Brazil’s population is evangelical, according to official figures, increasing by 61 percent between 2000 and 2012.
Marcelo Crivella, the elected mayor of Rio de Janeiro, served as religious pastor of the influential Universal Church of the Kingdom of God which was founded by his uncle Edir Macedo. According to the last Census, Crivella’s congregation numbered 1.87 million faithful. Macedo was cataloged by Forbes magazine as one of the richest men in Brazil in 2015, with a fortune valued at 3,000 million real (about US $1.1 billion), that includes the Record television network, the second most important in the country.

Another example is Marina Silva, member of the Assembly of God church and the Ecologist Party, the third most voted in the presidential elections of 2014. That same year, 75 evangelicals were elected as national lawmakers, surpassing the Workers' Party (64). The evangelicals were key to impeachment proceeding against the president Dilma Rousseff, having voted for "the serious moral crisis that Brazil was going through."

In Colombian politics, Viviane Morales is the first evangelical to have any real chance of winning the presidency in the May 2018 elections.
In Colombia, there are about 6000 evangelical churches, totaling some 10 million people out of a total of 48 million inhabitants who declare themselves part of one of these communities. Of those, six million can vote.

During the peace referendum on October 2016, the "No" vote won with the support of Evangelicals, who were driven to the polls by their opposition to the equal rights of the LGBT community and the defense of the ‘traditional family’.

In an interview for the website of El Mercurio, Edgar Castaño, president of the Evangelical Confederation of Colombia, said that the evangelicals voted against what they considered to be a "gender ideology". "We estimate that about four million (evangelicals) voted and between 1.5 and two million did so for the 'No'," he said.

But Brazil and Colombia are not the countries of the region with a strong influence of evangelicals in politics.

In Honduras, Guatemala, Nicaragua, El Salvador, Puerto Rico, Argentina, Peru, and Chile the vote of this community is also growing. The influence  of  Pentecostal groups in Peru’s Parliament was evident in its first vote in the block in favor of the 2016 censoring then Minister of Education, Jaime Saavedra, for what they consider "gender ideology.”

In September 2017, Congress removed Saavedra's successor, Marilú Martens, who said she defended "the gender equality approach in education". In October, the block voted against the use of medicinal marijuana.

During the first administration of President Michelle Bachelet, Chile decreed October 31 as a legal holiday to celebrate the National Day of the Evangelical Churches.