Today is the United Nations International Day for the Abolition of Slavery. 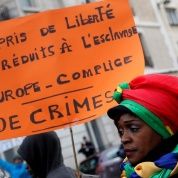 RELATED:
US Defense Secretary: Support for Kurds in Syria May End

TeleSUR interviews Professor Verene Shepherd, independent expert to the U.N. Committee on the Elimination of all forms of Racial Discrimination, Co-Vice Chairperson of the CARICOM Reparations Commission and Director of the Institute for Gender & Development Studies at the Mona Campus of the University of the West Indies, among other posts, to better understand modern day slavery, its roots, and what the international community needs to do to end it.

Shepherd says that Dec. 2, the International Day for the Abolition of Slavery, is a reminder and a call to the international community to “get together to intensify its condemnation of modern day slavery” focusing on Libya and other slavery “hotspots” around the world.

Over the past several weeks, the media has released images of young men from various sub-Saharan African countries being auctioned off in Libya.

“We’ve been confronted with disturbing images of … African people being sold,” says Shephard. She stressed that “all human rights defenders and activists have to condemn this action” in Libya.

She applauded the statement by several U.N. officials that condemns slavery in Libya, which reads, “It is imperative that the authorities urgently locate and rescue the victims of this horrendous crime and that Libya holds the perpetrators accountable.” The statement adds, migrants in Libya “are at high risk of … slavery, forced labor, trafficking, arbitrary and indefinite detention, exploitation and extortion, rape, torture and even being killed.”

Shephard was “struck” most by the “powerful” statement because it also calls on the E.U. to take “responsibility” to “investigate the claims” of slavery in Libya. She says that E.U. cannot continue to “offload its responsibility” of modern day slavery and human trafficking “to other countries.”

“The fact is,” underscores Prof. Shephard, “those caught in the Libyan slave trade are refugee, asylum seekers and migrants from African countries who “want to go to Europe,” but its leaders are “trying to stop the flow.”

Approximately 700,000 migrants are currently in Libya using it as a pathway to refuge in Europe, according to a UN estimate.

The academic activists adds, European countries “are trying to resource Libya to deal with the situation, but Libya can’t cope.” Shepherd says that while some European countries are taking some action, “they need to take responsibility for the crisis that’s happening ... Libya is creaking under this load.”

This week, French President Emmanuel Macron publicly erupted at students at the Burkina Faso University of Ouagadougou regarding France’s role in eliminating slavery from Libya. The president remarked, “These days in Africa, there are Africans who make other Africans slaves, this is the reality ... Ask yourselves, Who are the traffickers? They are Africans, my friends."

“It’s not the French who are the traffickers, it’s the Africans,” said Macron. “So everyone should understand the responsibility.”

“Offshore processing centers” in Manus and Papua New Guinea, Shepherds says, where humans are sold and traded to countries like Australia also have to condemned on this day.

RELATED:
The UN's Day Against Slavery vs. Slavery in Brazil

Shepherd underlines though that modern day slavery is a symptom of a more deeply rooted international issue of migration and asylum seekers fleeing their homelands.

“It’s not just slavery, but what gives rise to this in some cases ... The situation in Libya is related to the number of refugee, asylum seekers and migrants that land on Libya’s shores and...traffickers are using this as a means of carrying on modern day slavery.”

Shepherd also wants The International Day for the Abolition of Slavery also needs to focus on historical slavery. “We still have to hold states responsible to ensure that they listen to those who are calling for repairs of societies disfigured by slavery." “We still call on Europeans to make amends for those rounds.”

As Co-Vice Chairperson of the CARICOM Reparations Commission, created in 2013, Shepherd is calling on European nations to recognize and carry through with the commission’s 10 point action plan, that starting with an apology from European nations to Caribbean citizens. “European governments so far haven’t agreed to engage with us on the issue.”

Shephard added she hope that the United Nations International Day for the Abolition of Slavery will “make a difference” and calls on the U.N., academics and human rights organizations” to continue to try to eradicate slavery.

She says these days provide “moments for citizens to focus on the ills of the world ... I feel they are important.”