A public health study has found a link between psychological distress and people experiencing Zika-like symptoms in areas hardest hit by Ecuador’s 2016 earthquake, particularly among women between the ages 40 and 60 years. 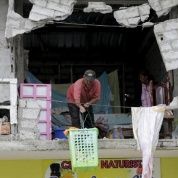 The city of Bahia de Caraquez in Ecuador’s Manabi province was rocked by a 7.8 magnitude earthquake on April 16, 2016. The region’s weak infrastructure and lack of preparedness resulted in high rates of mortality and morbidity and significant damage to buildings, roads and water supply.

In all of Ecuador the quake left at least 660 people dead, with a further 30,200 displaced and 720,000 left in need of humanitarian assistance. More than 9,700 buildings were reported damaged or destroyed.

Survivors were forced to sleep outside in makeshift tents and store water in open tanks, placing them under increased psychological stress.

A joint study by the Ecuadorean Department of Health; the SUNY Upstate Medical University in Syracuse, NY; and the University of California San Francisco in Sacramento concludes the conditions caused a spike in incidents of the Zika virus and other vector-borne diseases, such as dengue fever.

Zika virus cases skyrocketed from 103 just before the quake to 1,275 confirmed cases in Ecuador 10 weeks after the disaster, with 86 percent of all new cases occurring near the Manabi epicenter.

Scientists, led by Anna Stewart-Ibarra, director of the Latin American Research Program for the Center for Global Health and Translational Science at SUNY Upstate Medical University in Syracuse, NY, found that nearly 10 percent of interviewees suffered from a variety of Zika virus or dengue fever symptoms. Of those, more than 58 percent were suffering fear or anxiety.

The study, published in the International Journal of Environmental Research and Public Health, concludes that women between 40 and 60 years old still not sleeping in their own homes three months after the quake reported the highest incidences of Zika symptoms and mental distress.

Middle-aged women shoulder the most responsibility for their families in Ecuador, the study found, with female community leaders feeling doubly responsible to care for their neighbors. These social factors, along with the environmental conditions, likely decreased the ability of their immune systems to fight off the virus.

She said very few researchers are “looking at how mental health and infectious diseases interact in post-disaster settings.”

Relatedly, Stewart-Ibarra, who is also Assistant Professor in the Department of Medicine at SUNY Upstate Medical University, says that she and her colleagues are helping to implement a three-year Zika vaccine test in Ecuador under the direction of the U.S. National Institutes of Health, USNIH. The agency says the vaccine does not contain infectious material, so it cannot cause Zika infection.

Researchers, including Stewart-Ibarra hope to find out if the vaccine will "stimulate an immune response in participants, and assesses the optimal dose for administration. It also will attempt to determine if the vaccine can effectively prevent disease caused by Zika infection." Two thousand five hundred participants from the U.S., Ecuador, Peru, Puerto Rico, Brazil  Costa Rica, Panama and Mexico are expected to take part in the vaccine trial.

With the tremendous uptick of Zika-like symptoms in Ecuador since 2016, Stewart-Ibarra and her colleagues from the SUNY Upstate Center for Global Health are working with the country’s Ministry of Health and the University of Machala, located the southern coast in a Zika-prone area, on an international Zika vaccine trial directed by the U.S. National Institutes of Health.

The agency says the vaccine does not contain infectious material, so it cannot cause the Zika virus, whose symptoms generally include severe fevers, rashes and muscle and joint pain.

In addition, Zika is highly linked to triggering congenital brain abnormalities, such as microcephaly and Guillain-Barre syndrome, in babies born to mothers who had contracted the virus during their pregnancy, the effects of which the Caribbean region, Guatemala, Colombia and Brazil suffered in 2013.

Up until 2016, Ecuador remained relatively unscathed from the disease compared to Guatemala, which has witnessed more than 3,000 verified Zika cases since 2013. The number of Zika cases and other vector-borne diseases is still so high throughout the Caribbean that last October, regional officials began a public health campaign for their eradication.

Researchers of the three-year vaccine trial are hoping to find a way to "stimulate an immune response in participants and assesses the optimal dose for administration. (The study) also will attempt to determine if the vaccine can effectively prevent disease caused by Zika infection."