18 August 2014 - 01:59 PM
Analysis
Defamation of Character and Criminalization of Black People in the US
0

Media’s engagement and representation of black people and communities in the United States accompanies everyday stereotypes of black men and women since slavery. Mainstream media’s portrayal supports the state’s attempts to justify police brutality and white violence against black communities and individual victims. 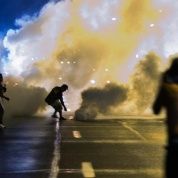 The U.S. media offensive against  black people and communities extends beyond the U.S. borders, however, in the last several years the murders of unarmed black men and women by police officers and other white people has called attention to the media machine and police manipulation of fatal circumstances.

Unarmed, 18-year-old Michael Brown was shot and killed by police in Ferguson, Missouri on August 9. Before releasing the name of the officer that fatally shot Brown, the St. Louis Police Department made public security camera footage claiming that Brown had stolen some cigarrettes from a convenience store the same day.

Across the board, media had mixed coverage on Brown. Some media outlets provided his high school graduation picture, while others attempted to convey him as a  dangerous black youth holding up a peace sign which many outlets referred to as proof of  "gang" affiliation.

Brown’s family and their lawyer recently released a statement expressing their outrage against "the devious way the police chief has chosen to disseminate piece mil information in a manner intended to assassinate the character of their son, following such a brutal assassination of his person in broad daylight."

The Merriam Webster dictionary defines character assassination as "the slandering of a person usually with the intention of destroying public confidence in that person." The police’s unfounded portrayal of Brown as a thug and thief are part of a racist attempt to destroy his character. Not only do these efforts affect Brown, but also contribute to the racial profiling and stereotyping of the entire black community of Ferguson and the United States.

Many of these factors have contributed to the criminalization of public protest in Ferguson resulting in militarized police presence, attacks on civil liberties and the overall police occupation underway.

Since the release of the video, social media networks have challenged the police’s consistent attacks against black victims. The Twitter handle, Iftheygunnedmedown engages users in a debate about how the police and media might portray black people and other people of color following a fatal interaction with police. The principal question, "If they gunned me down, what photo would you use?” challenges media to reflect on their perpetuation of U.S. society’s attempts to justify the murder of black people.

Gender also plays a significant role in the media and system’s portrayal of one’s character. Renisha McBride, a 19 year-old black woman was killed on the early morning of November 2, 2013, as she looked for help after a car accident. Theodore Wafer, a 54 year-old white man, killed McBride. Wafer is not a police officer, however, the slander that occurred on behalf of Wafer’s defense denigrated McBride’s person and attempted to justify white fear of black people.

It is not uncommon to see media denigrate black people to justify violence against them.

The defense and media focused on her supposed activities before the shooting, smoking marijuana and drinking, and claimed that she was a sex worker looking for a client with outstanding debt. The defamation of McBride’s character stems from the hyper-sexualization of black women during the era of slavery. The objectification of black women during slavery justified white men’s violence against enslaved women of African descent through rape and other expressions of sexual harassment.

Recently, the McBride/Wafer trial came to a close with the jury naming Wafer guilty on all counts. At the end of August, the court will elaborate on Wafer’s sentence.