A day before Palestinians commemorate 70 years of ongoing Nakba, of land dispossession, unpunished murders, and military rule by a foreign power, Israel celebrated the inauguration of the United States embassy in Jerusalem. 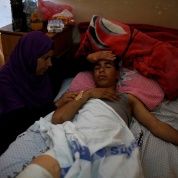 Before and during the diplomatic event in the occupied city of Jerusalem, thousands of Palestinian refugees who live in Gaza demonstrated near the Gaza-Israel border fence. At least 61 people were killed by Israeli snipers.

Since Palestinians began a cycle of protests to demand their right as refugees to return to their land over 100 people have fallen to Israeli bullets.

Despite this, on Monday there were headlines of Palestinians “dying.”

The United Kingdom’s Minister of State for the Middle East Alistair Burt said Monday he was “extremely saddened by loss of life in Gaza.” Nowhere did he mention Israel, the unilateral decision by the U.S. government to recognize Jerusalem as Israel’s capital, or the Israeli snipers deployed to the Gaza-Israel border who are causing the “dying.”

Media coverage of the ongoing human rights violations in occupied East Jerusalem, the West Bank and Gaza is marred by words like “die” and “war.”

Words that make the possibility of reaching accountability more unlikely.

However, as long as media outlets blur responsibility for the atrocities committed in the occupied territories there will be little incentive for governments to take action.

Something similar happens with the word “war”.

It is common for mainstream media outlets to call full scale Israeli military attacks against Gaza "wars". In 2014, when 2,251 Palestinians were killed by the Israeli occupation army, news consumers were told they were reading about a war.

This way of framing the news hides the underlying asymmetries in power and conceals the criminal nature of Israel’s actions against Palestinian civilians.

“War” hides that Gaza has no real army, they have no tanks, submarines, or warplanes. When confrontations between Gaza militias and one of the world’s mightiest armies are referred to as wars Israel gets to shield itself behind its "right to defend itself."

As long as Palestinians “die” in “wars” U.S. officials can continue to argue Israel bears no responsibility. Or, like U.S. ambassador to the U.N. Nikki Haley did Tuesday, claiming that what endangers Palestinians are no Israeli snipers but the Palestinian Islamic Resistance Movement Hamas, who rules Gaza.

Words matter and censorship is real. Not only within media outlets but also within international bodies.

In 2017 the head of a United Nations Agency, Rima Khalaf had to resign from her post after refusing to withdraw a report that explained how the system of apartheid works in Israel.

Khalaf had to step down because the international community has agreed apartheid constitutes a crime against humanity that should carry international economic and diplomatic consequence, however so far the U.N. and western governments have yet to acknowledge that Israel fits the profile.