“I believe, and I say it with all sincerity and at times coldly, that I know they are going to assassinate me.” 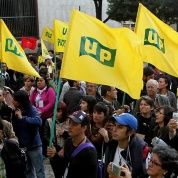 So said Bernardo Jaramillo Ossa, the Patriotic Union’s presidential candidate in the 1990 election. And he was right.

On March 22, 1990, Bernardo Jaramillo was gunned down in cold blood inside the Bogota airport.

The murder of Bernardo Jaramillo is but one episode in the larger tragedy that was the systematic campaign of assassination and terror against supporters of the Patriotic Union party, known as the UP. Jaramillo wasn't even the first UP presidential candidate killed.

Jaramillo took over the leadership of the party from Jaime Pardo Leal, the UP candidate for the 1986 elections, who was murdered in 1987. In total 21 lawmakers, 70 local councilors, 11 mayors and no less than 5,000 supporters were killed in what was deemed a political genocide.

An image of the assassinated presidential candidate of the Patriotic Union, Bernardo Jaramillo, sits in Bolivar Square in Bogota, Colombia, Oct. 18, 2012. | Photo: EFE

The Patriotic Union was a big-tent, leftist political party born out of peace negotiations between the government of President Belisario Betancur (1982-1986) and rebel groups, including the Revolutionary Armed Forces of Colombia (FARC).

Colombians had grown fatigued with the status quo, whether it was the army massacre of workers in 1928, or the decade of conflict between the supporters of the Liberal and Conservative parties that left hundreds of thousands dead. Violence was too often used to settle political differences.

Founded in 1985, the party embodied the hope that Colombia could break with its violence-plagued past and achieve change through the electoral process.

The leaders of the FARC also acknowledged that agreements signed with the government represented a democratic opening that had not existed before.

The deal signed between the government and the FARC, known as the Uribe Agreements, sought a political solution to the long-running armed conflict. It included a series of political reforms and explicitly provided for the creation of this new legal political party that would act as a vehicle for the political ideas defended by the rebels.

Critically, the deal also included a commitment from the state to defend the political rights of those who put their faith in this new, legal political vehicle for change.

The state not only failed to protect supporters of the UP, however, but actively formed part of the effort to extinguish the party and its members.

The deal became a trap and exposed political actors associated with an armed rebel movement — the ire of political elites, narco-traffickers and landowners — to its enemies. Almost from the very start, supporters of the UP were targeted.

The goal of the UP's enemies was to extinguish the party and ultimately the ideas that it supported, such as land reform, reduction of inequality and social investment.

Despite the constant threats, killings and forced disappearances, the UP endured. In the 1986 elections, barely a year after being created, the party won a number of posts and its presidential candidate won 4.54 percent of the vote, a historic achievement.

Colombia, traditionally ruled by either the Liberals and Conservatives, now had a third party that represented socialist ideas and was gaining support from the population.

The traditional elites felt threatened and stepped up their attacks against the UP and its supporters.

Through clandestine schemes such as “Plan Esmeralda” and “Plan Red Dance,” state forces, together with paramilitaries, worked to eliminate the influence and growing power of the UP, focusing on the areas where it was strongest.

In an effort to decapitate the party, elected representatives and party leaders in particular were targeted for assassination.

“There is a direct relationship between the emergence, activity and the electoral support of the Patriotic Union and the killing of its activists in regions where the presence of that party was interpreted as a threat to the maintenance of the privileges of certain groups,” read a 1992 report by the Colombian Ombudsperson.

Photos of forcibly disappeared supporters of the Patriotic Union are displayed as part of the “Gallery of Memory” in Bogota, Colombia, Aug. 9, 2004. | Photo: EFE

In the face of this violence, many former FARC combatants returned to the jungles and mountains of Colombia to resume the armed struggle.

The state-sponsored repression against the UP continued through the 1990s.

So great was the violence that in 1996 the president of the party, Aida Avella, was forced into exile after her car was attacked with a rocket launcher.

The party, debilitated as a result of the political genocide, was officially extinguished on September 30, 2002 when Colombia's electoral authority dissolved its official registration after it failed to get the necessary amount of votes.

In 2013, recognizing that the UP lost its registration as a result of the crisis it faced after its membership was nearly eradicated, the Colombian Council of State decided to restore its legal status. Aida Avella returned from exile after 17 years and in 2014 ran for vice-president alongside Clara Lopez of the leftist Democratic Alternative Pole.

The UP is slowing rebuilding itself as a party and ran candidates in recent local elections in Bogota.

On Nov. 24, 2016, the FARC and Colombian government finally signed a final peace agreement in Bogota, but the issues that led to the collapse of the previous efforts to secure peace persist.

The ghosts of the political genocide still haunt Colombia.

During a speech in February 1989, Bernardo Jaramillo said, “You cannot talk about peace if you do not effectively combat against paramilitary groups.”

These irregular armed groups persist to this day and pose a serious threat to a post-conflict Colombia.

Avella herself has warned that Colombia could be witness to the kind of targeted killings of political activists like those committed against members of the UP.

“I don't think another genocide is starting, rather it is a continuation of the genocide against opposition sectors. That's because the paramilitary structures have not been dismantled, they are completely intact,” said Avella.

The Patriotic March, a social movement backed by many of the same progressive political forces that backed the UP, has seen dozens of its leaders assassinated. The Center for Research and Popular Education, a Colombian Jesuit NGO, released a report in May 2014 that warned that a “genocide” against the Patriotic March was underway with 48 of its leaders killed.

The NGO warned that what took place with the membership of the UP could happen to the Patriotic March. The social movement recently received death threats directed at a number of the organization's members including student and campesino leaders, as well as prominent Senator Piedad Cordoba.

Political activists are not the only ones threatened by paramilitary groups. A report by the organization Somos Defensores released in August 2015 revealed that attacks against human rights defenders from January to June had risen from 194 in 2014 to 399 in 2015, an increase of 105 percent.

In other words, twice a day human rights defenders were attacked or harassed — and every 5 days one was killed.

There are also still elements inside the Colombian state that vehemently oppose peace. Former Colombian Attorney General Alejandro Ordoñez launched an investigation against a left-wing Senator Ivan Cepeda over his efforts to hold former President Alvaro Uribe accountable for his alleged links to far-right paramilitaries and their crimes against humanity.

Ordoñez is an ally of Uribe, while Cepeda is a champion of the peace process. It is worth noting that Cepeda is also the son of Manuel Cepeda, a UP Senator assassinated in 1994.

The peace agreement specifically includes a section that makes it incumbent on the Colombian state to guarantee the safety of political activists. Yet many in the FARC are rightfully worried they will be systematically eliminated.

Peace in Colombia is contingent on all political actors having the confidence that change can happen through legal means, lest history repeat itself and those committed to change be forced to contend with another political genocide.