In a historic first for Colombia, this year's May 27 presidential elections include four female candidates for the position of vice-president. 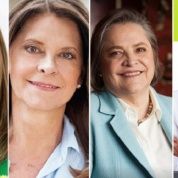 More than 24.7 million women represent 50.78 percent of the Colombian population, of whom 18.7 million are eligible to vote, whereas only 17.5 million men are registered voters.

"Female leadership has been fundamental, especially in the regions where senators, congressmen, mayors and governors have come from," Diego Julian Cediel Nova, a political science professor at the University of La Sabana, told EFE.

"This is the first time that one of them can actually occupy such an important position in national politics as the vice president."

Here, we examine the political backgrounds and endorsements of the four female vice-presidential candidates.

Ramirez is a former senator and minister of defense and foreign trade. This is not the first time she has run for the vice-presidency.

Ramirez has also served as the CEO of several private sector companies and associations, including ANIF (Financial Institutions Association), Fedeleasing, and the Coalition for Colombian Manufacturers Development.

She is accompanying Ivan Duque, the right-wing presidential candidate for the Democratic Center Party, for the 2018 - 2022 presidential term.

Duque, a former senator, was handpicked by one of the party's founders, former President Alvaro Uribe, who is known to have overseen grave human rights violations, including paramilitary massacres, during his term.

"Duque championed the victory of the NO at the plebiscite, which meant millions of votes. In addition, he is currently the most voted senator in recent Colombian history, and his approval ratings – despite all the anti-democratic excesses in the fight against the FARC and the ELN – are close to 80 percent," Jeronimo Ríos, a PhD scholar in political science from the Complutense University of Madrid, wrote for Open Democracy.

In a recent interview with Bloomberg, pro-capitalism Duque said he would like to improve trade relations with the United States, remove the "blockade of the access to free markets," and slash tax rates because they're "pretty high."

During Ramirez's tenure as the first female minister of national defense, she was responsible for centralizing military spending, designing management indicators for the armed forces, consolidating training within the three branches of the military and National Police, and forming a civil commission for restructuring and strengthening the National Police.

Less than a week before the Venezuelan elections on May 20, Ramirez – along with the party's leader, Alvaro Uribe and former President Andres Pastrana – met with Venezuelan opposition leader Maria Corina Machado, who made headlines by proposing to remove Maduro with force.

According to Open Democracy, Ramirez "represents a reactionary position towards the agreement, and enjoys a larger support from and voting intention by the conservative electorate."

A psychologist by profession, Angela Maria Robledo has a master's degree in social policy. She was the director of the Department of Social Welfare in Bogota and was involved with making the first public policy on women in the city.

Formerly a professor with the psychology department of the University of Javeriana, she joined the House of Representatives in 2010.

Robledo is part of the Green Alliance and resigned from her position to join Petro's campaign in late 2017. Petro is the leftist politician, economist and presidential candidate who previously served as mayor of Bogota.

Colombian Senator Ivan Cepeda told El Spectador: "She is a woman who has a special sensitivity to injustice, especially to women victims. She is a rebellious woman who does not shut up easily, a radical leader in her visions, but rational in the political field."

Asked by the National Network for Women 'What elements are fundamental for a woman to think about politics?' Robledo said: "For women, it is fundamental to recognize our biography as an empowering element of the action of politics and not as something that weighs on us, that prevents us.

"Starting with these biographical milestones is fundamental. This is where we recognize that we are an ethical reserve, for politics, for peace, for the economy of a country and not for naturalizing the fact, but because culture put us in the care of life, in the care of the planet, in the small things that no one cares for it seems to me that it is a fundamental element.

"There is a continuity of that task that starts in the private space, that is we should not start saying that we are going to do politics when we go to the Congress. No, that starts in those domestic spaces where you fight for your place and build your freedom every day, your freedom in relation to others, but your freedom, and in the spaces that women have been in community tasks."

During a recent phone interview as part of online campaign 'RetoDelos10Minuto (10-Minute Challenge),' Robledo spoke of improvements required in the healthcare system.

"The clinical practices in this health system have meant that giving birth to a boy or girl risks death for many women: that child comes into the world in conditions where women are mistreated."

Speaking with El Spectador, she said: "We are considering expanding maternity leave to six months; it should not only be the responsibility of the mother, but of the father and family members."

Fajardo's campaign includes figures from the Green Alliance and the Democratic Pole, and takes up some of Petro's proposals because it prioritizes "fiscal progressiveness, better redistribution of wealth, growing investment in public education and healthcare, higher accountability and the strengthening of the fight against corruption."

In October, Lopez fled Colombia after receiving death threats for her investigative reporting on the so-called parapolítica network that links politicians with paramilitary groups.

In March 2014, the 44-year-old anti-corruption advocate won her seat representing the Alianza Verde (Green Alliance) with the slogan 'Colombia se respeta' (Colombia must be respected).

She received over 81,000 votes, making her the most-voted candidate in her party that election cycle. The progressive party won five out of 102 Senate seats and came in sixth with 3.94 percent of the vote.

Lopez, a Bogota native, has a long history of political activism. During her time at the Universidad Distrital, she was part of the student movement La Septima Papeleta (The Seventh Ballot), which called for a constitutional assembly during the 1990 congressional elections. Later, when Lopez transferred to the Universidad Externado de Colombia, she studied government and international relations.

Apart from advocating against corruption, Lopez has emphasized the need to construct a more equitable and accessible educational system and reform Colombia's justice system.

Lopez has also called for better regulation of mining by the Colombian government, more responsible mining practices and the expansion of popular consultation.

"To achieve a more equal country, we have to practice active citizenship and politics," Lopez said as part of the political campaign. "The key is to defeat corruption with clean citizen-led politics."

Clara Lopez, the running mate of Humberto de la Calle, is president of the Alternative Democratic Pole and currently serving as minister for employment in the government of Juan Manuel Santos.

In 1986, Lopez joined the Patriotic Union, a leftist party formed in the wake of peace negotiations between the Revolutionary Armed Forces of Colombia (FARC) and the government. It sought to bring together a wide array of leftist political forces and leaders to contest power through the ballot box. In 1988, she ran as the Patriotic Union's candidate for mayor of Bogota, a position she filled later.

But many see her as a controversial figure: despite being part of the center-left, her "support for Juan Manuel Santos and the fact that she was a cabinet member have earned her much criticism as opportunistic and ideologically ambiguous," Rios wrote.

Running on the Liberal Party ticket, Humberto de la Calle and Clara Lopez are committed to "the peace agreement signed with the FARC, but whom many associate with Juan Manuel Santos, whose disapproval ratings exceed 70 percent. Their political approach is much more liberal, in terms of the State/Market/Society relationship than Fajardo's and especially Petro's."