A fine mist settles on Chile’s fishing hamlet of Puerto Montt as the first shift arrives for work at Patagonia Salmon Farming. Water tanks spit gunmetal-gray fish onto a silver table where a pair of workers stand waiting for them on either side, mercifully slicing their gills with one smooth stroke of a fillet knife, before sending them on their way. 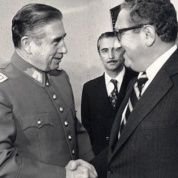 RELATED:
CIA Continues to Cover Up Its Involvement in Chile's 9/11 Coup

Salmon farming pumps roughly US $1 billion-a-year-into Chile’s economy, and helps explain why, since 1990, practically no other economy in this part of the world has done better than this country of 18 million people, on a sliver-of-land at the continent’s southwestern tip. While the economies of neighboring countries like Brazil, Bolivia, Ecuador and Peru sputter, crash and shrivel, Chile is managing to stay afloat, even in an off-year, by selling more of its fish, fruit, wine and other goods abroad than practically any of its neighbors.

This is what’s long been known as Chile’s economic miracle. And it has for years been praised by the global elite as the upside of Augusto Pinochet’s military coup that rumbled through the capital city of Santiago on this day 43 years ago. Wall Street financiers, Western CEOS, politicians and mainstream economists all point to Chile as the gleaming example of what developing countries can accomplish if they tear down their walled-off economies and faithfully follow Washington's blueprint for prosperity.

But what is perhaps most remarkable about Chile’s economic miracle is that it isn’t remotely true.

The arc of Chile's salmon industry is a study in mythmaking.

For starters, it was the Chilean government and not the free-market that developed the technology for salmon cultivation for wide-scale commercial use. When the project became commercially viable, the government-funded nonprofit research arm, the Chile Foundation, sold its stake to Japanese investors in 1989. Today, salmon is Chile's second-largest export after copper, bringing annual revenue of nearly $1 billion and providing jobs for more than 100,000 people.

Equally important, however, is that the salmon farming industry is in the process of recovering from a serious outbreak of infectious salmon anemia, or ISA,  which began in 2007.  Researchers say the epidemic was caused by a laissez-faire approach to consumer safety, lax government regulations, and a prioritization of sales.

A new regulatory system has been implemented but salmon is a perfect metaphor for Chile’s economy writ large. To put too fine a point on it, the country’s economic successes, largely, are rooted in state investment and redistributive economic policies, while its failures owe largely to loosely-regulated capitalism.

When Pinochet’s troops stormed the presidential palace on September 11th, 1973, the junta’s 500-page economic plan was being printed in the basement of a Santiago publishing house. Convinced that he was rescuing Chile from a communist menace, Gen. Augusto Pinochet put his faith in a coterie of young Chilean advisers who had trained at the University of Chicago's School of Economics under free-market icon, Milton Friedman. Restricting dissidents and union activity, Pinochet's repressive regime handed the "Chicago Boys" — as they came to be known — a blank check to remake Allende's nationalized economy.

Nearly 15 years before economists coined the phrase "Washington consensus" to describe the deregulatory policies promoted by the U.S. Treasury Department, the World Bank and the International Monetary Fund, Chile had installed Latin America's first post-Cold-War template for a wide-open economy.

Pinochet slashed duties on imports, from an average tariff rate of 94 percent in 1973 to 10 percent by 1979. He privatized all but two dozen of Chile's 300 state-owned banks, as well as utilities and entitlements such as social security. By 1979, he had cut public spending almost in half and public investment by nearly 14 percent. He lowered taxes, restricted union activities and returned more than a third of the land seized under Salvador Allende's land reform program.

Monetary policy was liberalized on two important fronts. First, Pinochet allowed "hot money" — speculation on the currency market — to flow in and out of the country without obstacle. And in 1979 he fixed the exchange rate for Chile's peso, requiring the central bank to keep US $1 in reserve for every 39 pesos printed. This kept the bank from merely printing money to pay bills and curbed an inflation rate that had soared to nearly 400 percent annually under Allende.

Chile's economy contracted by 13 percent in 1975, and the recovery that followed was fueled largely by foreign cash, which poured into the country as investors gobbled up utilities and stashed money in Chile's currency markets. The prices of imports fell sharply; between 1975 and 1982, the number of foreign cars sold in Chile tripled. Domestic manufacturing shriveled by 30 percent. Domestic savings plummeted. Wages fell, and the income gap between rich and poor widened by a factor of 50.

By 1982, Chile had accumulated US $16 billion in foreign debt -- the highest in Latin America -- and foreign investment represented a quarter of the country's gross domestic product. The money flowing into the country flowed out just as easily, to pay debts and bills for imported goods and through capital flight as investors soured on Chile's currency market. The economy had overheated and was now in a meltdown.

With a third of the workforce unemployed and unrest growing, by 1984 Pinochet began to "reform the reforms," said Ricardo French-Davis, a Chilean economist.

He allowed the peso to float and reinstated restrictions on the movement of capital in and out of the country. He introduced banking legislation, and ratcheted up spending on research and development efforts through the Chile Foundation and other collaborations between the public and private sectors.

Following the 1989 plebiscite that restored democratic elections, Chile began to double down on the macroeconomic reforms just as the rest of the continent was beginning to adopt the very neoliberal policies that Chile was now shedding. Between 1990 and 1992, Chile doubled government spending on health and education, and introduced tax incentives to businesses that provide job training, helping to increase the percentage of Chileans with higher education from 9 percent in 1992 to 16.4 percent last year. The number of professionals in the country expanded 124 percent over that period.

Successive governments strengthened workers’ rights, introduced what was at the time the broadest unemployment insurance plan on the continent and reduced from six months to one month the period of time employees can work without a contract. Between 1990 and 1998, Chilean lawmakers increased the minimum wage by 87 percent.

Argentina and Brazil loosened restrictions on foreign cash flowing in and out of their countries, but Chile slapped restrictions on it. While countries such as Bolivia and Uruguay put the brakes on public spending in the 1990s, the Chileans more than doubled public expenditures on health and education between 1990 and 2003.

Other countries cut taxes in the 90s; Chile nearly doubled the taxes on corporations over that span. Brazil and Argentina fixed the value of their currencies -- guaranteeing that the central bank would exchange local tender for dollars at a fixed rate -- to combat inflation. By contrast, Chile devalued its currency and kept it on a tight leash to protect local industries from foreign goods that gained a price advantage against an overvalued local currency.

"What makes Chile different from the rest of Latin America," said Chilean economixst Manuel Riesco, "is not that we embraced the free market more than our neighbors. What we realized is that the free market is like a car. There is no doubt that it is the best way to get you from point A to point B. But you have to steer. If you take your hands off the wheel, you will end up face-down in a ditch."

But Chile’s blend of Keynesianism and finance–similar to that in the U.S. that began two years later with the bankers’ takeover of New York City’s finances–has authored a Tale-of-Two Cities narrative.  Per capita income in the country is nearly quadruple what it is in Honduras but a 2014 Credit Suisse report shows that nearly 42 percent of Chile’s wealth is concentrated in the hands of the richest 1 percent.  More than a third of Chileans say they routinely have trouble making ends meet. Chile is the first country to privatize its entire water supply, leading to shortages, and massive protests. Similarly, privatized education has made Chile’s per capita educational costs among the highest in the world.

So discredited is neoliberalism in Chile that the national joke is to refer to the Chicago Boys as Si, Cago, Voy, which translates to:


By Urooba Jamal and Jhon Jeter