“Che tere sapno ko hum manzil tak pahuchayenge” which literally translates to “Che, we will realize your dreams” is a popular slogan heard on Indian streets during any protest by left-wing activists. 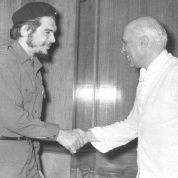 On the night of Jun. 30, 1959, Che Guevara’s plane landed at Delhi’s Palam airport. Guevara and his companions  – a mathematician, an economist, a party worker, a captain of the rebel army, a radio broadcaster, and a single bodyguard – were welcomed by Deputy Chief Protocol Officer DS Khosla. He met then Prime Minister Jawaharlal Nehru and various industries in India, and formed a strong bond with the government in India at the time.

The relationship between Che Guevara’s ideology and Indian leftist activism is still strong. His name is heard in slogans, protest music, and political debates.

"And we do implement that in our agenda and debates. Secondly, We do not see him as the pop communist icon the world has made him to be. The organization goes back to his political teachings to use them as a prism to understand the modern capitalist evils plaguing our society.”

“One of our main slogans during protests is:

Shall Always be Victorious

We Shall fight We Shall Win”

In contrast to Baasit’s thoughts, Saroj Giri, a professor of political science, and leftist activist in the University of Delhi said that there are three levels of Guevara’s interaction with India's left circle.

“First, as in any other place, Che is considered a global icon, an icon to inspire youth. Second, the leader is invoked in a very statist term," Giri told teleSUR.

"Parliamentary communist parties (the Indian left circles are divided between left parties who contest in elections and parties who only work for revolutionary social transformation) like Communist Party of India (CPI), and Communist Party of India-Marxist (CPIM) invoke Guevara at a statist level, not as a revolutionary leader to inspire the youth of the country. For example, he was also invoked through the Fidel Castro-Indira Gandhi ‘friendship’ during the Non Alignment Movement (NAM)” era.

Fidel Castro was a supporter of NAM and Indira Gandhi. In fact, Indira Gandhi invoked Che Guevara and Castro’s friendship to legitimize her imposition of emergency in the country, and that was a very statist use of a revolutionary leader, as informed by Saroj Giri.

“Third, and most interesting is that in the actual radical politics in ground level, Che does not seem to have much influence in India.”

Giri gave the example of the naxalbari movement in India. Naxalbari is a guerrilla movement in India which started in 1967 and which is still active in the forest areas of central India. The armed peasant uprising started in the Naxalbari block (from which it derives its name) of the Darjeeling district, West Bengal, a state in eastern India. The struggle was led by local tribal and communist peasant leaders of West Bengal against the exploitative landed class, and later spread to different parts of India.

“During the naxalbari movement, Che was invoked here and there, but mostly among the urban youth of Kolkata. In Indian villages Mao Tse Tung is dominant. Because of the Maoist influence, Che did not have much influence. Naxalbari is such a local grounded struggle which would not follow any icon. Che and Castro were new in the revolutionary struggle. Whereas Mao’s ideas were present for a much longer time,” explained Giri.

Expanding on Guevara’s late arrival in the Indian revolutionary struggle, Giri gave the context of the Telangana and Tebhaga peasant movements. Both communist peasant movements started in 1946 in West Bengal and Hyderabad respectively. The movements were against local feudal landlords and related to issues of share crops, land redistribution, and exploitation by the landed elite. According to Saroj Giri, Mao Tse Tung and his revolution had an influence on these movements, and the same trend followed till Naxalbari. Hence, in any revolutionary struggle, Che’s presence was not felt as intensely as Mao’s.

In fact, the famous leader of Naxalbari movement, Charu Mazumdar, in one of his writings, “Eight Documents”, criticized the youth who invoked Che Guevara as diverting the Indigenous mode of peasant struggle in India by trying to implement a Latin American model of revolution which was not compatible with the Indian social structure. He stressed the importance of Mao’s political teachings as much more closer to Indian society but should not be confined to that model.

“Che is very much in India at a popular level. But he has been more or less been appropriated in a wrong way. He was a genuine revolutionary but weak about his formulations regarding mode of production. It is more like a group of genuinely inspired revolutionaries will set up a base and from there they will inspire peasants and others but it is not organic. It is a model of implanting revolution. He is present figuratively and metaphorically but not in a concrete way. In fact, in India groups who do not go by Che’s ideas still consider him to be an inspiration,” concludes Saroj Giri.

Reflecting on this metaphoric presence of the Cuban leader, Baasit concludes with the famous Hindi slogan romanticizing the communist revolutionary, “Che zinda, zinda hain” which translates to “Che is still alive”.