Ernesto Guevara, the Argentine middle-class doctor turned revolutionary, better known for his role in the victorious Cuban Revolution, was executed by the Bolivian army and the United States Central Intelligence Agency 51 years ago on Oct. 9, 1967. 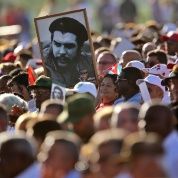 OPINION:
Richard Gott on Meeting Che and Covering His Death

On this anniversary, teleSUR English pays homage to the Latin American revolutionary by providing insight into his political thought and the validity of his ideas on Imperialism, guerrilla warfare, national liberation struggles, and on the Socialist revolution as a means to overcome the alienation of humankind.

Che’s life and legacy are not limited to the series of anecdotes that are regularly portrayed in pop culture, but in his meticulous study and reinterpretation of Marxist thought for revolutionary action based on the belief that Socialism was the only possible response against Imperialism and its attacks on the Third World (non-aligned countries).

Guevera’s aversion to “Yankee Imperialism” wasn’t the result of Soviet propaganda but of having witnessed work conditions at Chile's copper mines run mercilessly by the U.S.-based Anaconda Company, and from having listened to the tales of the horrors perpetrated by the United Fruit Company, known today as Chiquita Brands.

A citizen of the American continent, he was deeply aware that Imperialists abroad had their most loyal allies in the national bourgeoisie that collaborated to uphold their economic interests and facilitate the neo-colonial plunder of natural resources and dispossession of the “masses.”

In this context, his political thought fused the struggle for national liberation and Marxism.

Ernesto Guevara believed “one should be a Marxist with the same ease as one is Newtonian in physics” but he also rejected predominant Marxist interpretations that promoted the almost natural flow of historical stages in the evolution of the contradictions that emerge from the relationship to production that would inevitably bring about Communism.

For Che, the Jul. 26 guerrilla movement led by Fidel Castro was “a rebellion against the oligarchies and revolutionary dogma.”

Argentine Marxist scholar Nestor Kohan contends Che and the Cuban Revolution questioned the “stage-ist” concept of history that divided the missions of national liberation and Socialist revolution, promoting a vision of these two tasks as indivisible in the context of Latin Amerian politics and the struggle of popular sectors; e.g. workers, Campesinos, and Indigenous peoples, against Imperialism.

In that sense, Guevara echoed another great Latin American Marxist, Jose Carlos Mariategui, who urged Socialist and Communist movements and parties to not fall into passivity. “Marxism, where it has been revolutionary, has never obeyed a passive and rigid determinism,” Mariategui argued.

Breaking away from the passivity induced by historical determinism implied the intellectual and organizational task of creating what Mariategui called an Indo-American Marxism, one that would mirror the realities and urgencies of the American continent characterized by a non-productive national bourgeoisie and a colonial oligarchy that still owns the most important means of production: the land.

“Armed struggle is not the path chosen by the revolutionaries. It is the path the oppressor has imposed on the people.”

(Fidel Castro, before the victory of the Cuban Revolution).

Against historical determinism, Che urged Communist and Socialist parties to “not become new spectators of the revolutionary wave being born in the heart of the people” and advocated for “man to become an architect of his own destiny,” linking it to Karl Marx’s famous assertion that philosophy had to change, not merely interpret, the world.

For Che and the Cuban revolutionaries, the contradictions between the national bourgeoisie and the interests of the people (the revolutionary subjects in Latin America, made up more of Campesinos and Indigenous people than of industrial workers) provided sufficient support for a Socialist revolution.

Michael Löwy, Brazilian sociologist and Marxist philosopher, explains Che understood the guerrilla as the core of the popular struggle and believed the “role of vanguard parties (was) to contribute to creating the necessary conditions to take power.”

In "Guerrilla Warfare," Che argues the “guerrilla struggle is a struggle of the masses, a struggle of the people. The guerrilla, as an armed nucleus, is its combatant vanguard and its great strength lies in the masses. … (They) take up arms in response to the irate protest of the people against its oppressors and fight to change the social regime that keeps their brothers unarmed, in disgrace and misery.”

Guerrilla warfare was a historical necessity, especially in a continent where the dominant classes had proven their unwillingness to uphold democratic processes when the outcomes threatened their economic interests.

For the people who fought against the army of dictator Fulgencio Batista, the Cuban Revolution was a war of national liberation, in which the ideas of Socialist revolution and patriotism (not to be equated with fascism) were indivisible. “Patria o Muerte, Veneremos” (Homeland or Death. We Shall Prevail) was one of the most common phrases among Cuban revolutionaries who were effectively fighting against the second conquest of the American continent carried out by English and U.S. transnationals.

Communism for the Liberation of Humanity

After the Revolution succeeded, Che’s political action and writings revealed an emphasis on the development of Communism as a new way of life with a different and liberating morality, as a path to the foundation of a “new man.”

In that sense, Kohan points out Che’s interpretation of the “Socialist revolution as a great intellectual and moral reform that would … build ... a new hegemony and culture.”

As head of the National Bank, the Department of Industrialization, the National Institute for Agrarian Reform, and later the Ministry of Industry Ernesto Guevara posited a controversial idea for the time: humanity must be liberated from the process of production.

“Economic socialism without Communist morality does not interest me. We fight against misery, but at the same time against alienation,” Guevara wrote in Socialism and the New Man, where he stressed that Marx understood Communism as the solution of the contradictions that produced the alienation of humankind from the product of its labor, from productive work, from their own potentials, and from others.

OPINION:
The Bolshevik Revolution and the Legacy of Anti-Imperialism

This perspective made Che openly oppose the Soviet economic model arguing that by upholding the law of exchange value, maintaining commodities as the core of the productive system, and encouraging competition among factories and workers as an incentive to increase productivity, the model was not conducive to the goal of combating alienation.

He believed in the liberating potential of Socialism and that it could not be carried out by state bureaucrats, but by ensuring that the state and its economic/productive structures were capable of expressing what Antonio Gramsci called a “national popular collective will,” defined not by the imposition of the interest of one revolutionary class over all others, but by the articulation of the interests of all popular sectors.

This means the redefinition of the concept of national, of what constitutes the nation, starting from the inclusion of all the identities, subjects, and demands that are marginalized by the colonial and neocolonial enterprise. The inclusion of the Indigenous, the Campesino, the Afro as political subjects, which implies talking about the ownership of land.

Just like in the 1950s and 1960s, transnational capital and corporations continue to claim territories, displace populations, dispossess the masses, murder leaders and collaborate in regime change when democracy doesn't go their way.

Given that the social, economic, and geopolitical conditions remain very much the same, Che's most important lesson for today's popular movements is rebelling against fatalism.

For U.S. sociologist James Petras, Che’s definition of Imperialism as “a social and political relationship between classes and states” revealed a structure vulnerable to transformation. This is particularly relevant today when Capitalist globalization is presented as "an objective structure" in an unstoppable path to Progress.

To self-defined progressive parties in power, Che and the Cuban Revolution show there can be no emancipatory politics without the social redistribution of land, a task none of the latest Latin American progressive governments were willing to take on.

Today, parties and movements with a national popular horizon would benefit from heeding that call and recognizing that the only real allies of leftist political projects are the dispossessed masses, of which a central actor is the landless Campesino.

Lastly, Che’s legacy also entails a lesson on political ethics. His revolutionary thought was one that upheld at least two central principles: 1) equality among leaders and followers which should transcend the revolutionary (constituent) moment to be the basis for the exercise of power, and 2) any Socialist revolutionary political project should have as its ultimate goal the effective elimination of all social and productive relationships that produce forms of alienation.