It is rare sight to see the purple flags that have come to symbolize the feminist struggle, together with the LGBTQI community’s rainbow flag flying, and alongside the red banners used by Socialists, Communists and a wide array of workers' unions. In Brazil, however, this has become common as women lead a national counter-offensive against far-right presidential candidate Jair Bolsonaro. 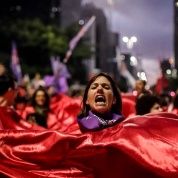 On Oct. 28, Brazilians will head to the polls to elect a new president. The candidates are Fernando Haddad of the Workers’ Party (PT) and Jair Bolsonaro of the Social Liberal Party (PSL).

Haddad is a university professor and a lawyer. As a student during the military dictatorship, he joined the movement to demand democratic elections, and as education minister during the presidencies of Luiz Inacio Lula Da Silva and Dilma Rousseff, he played a key role in expanding access to universities through the University for All program.

Bolsonaro is a legislator and a member of Brazil’s military reserve forces. He has been a legislator for 28 years, since 1990. Throughout that time he has been affiliated with nine different political parties and successfully proposed two bills. After the dictatorship, in 1987, he was imprisoned for planning a bomb attack against his employer (the army) in protest over low salaries.

Haddad’s main obstacle to the presidency is that he belongs to the PT, a party that has been targeted by what Ecuadorean anthropologist and feminist Pilar Troya calls a “selective fight against corruption” by Brazil’s mainstream media and the judicial branch.

It is selective, she explained to teleSUR, because all of Brazil’s political parties are involved in corruption scandals, but the PT has been most intensely targeted and particularly when elections are near.

Bolsonaro is lauded for not facing corruption charges, unlike Lula, the leader of the PT. An accomplishment that a local newspaper revealed to be untrue after it was uncovered that national businessmen were involved in buying a series of fake news WhatsApp “packages” to benefit Bolsonaro’s campaign.

Despite Bolsonaro’s endorsement of Brazil’s military dictatorship (1964-1985) and torture, public justification of the gender pay gap, racist comments against Brazil’s Afro and Indigenous populations, disdain for working-class people, promotion of physical abuse against gay children, and rape “jokes” he is expected to win with over 50 percent of the vote.

However, the violent rhetoric that has secured him support by some, has also created the basis for a massive popular movement led by women who “are uniting around words of love, coexistence and the right to life and of future generations to a good life,” mother and feminist/LGBTQI activist Lara Werner said of the Ele Nao, or Not Him, movement.

In an interview with teleSUR, Werner argued that “the lives of all the peoples threatened by the capitalist, white, and heteropatriarchal hegemonic system are at stake. … The human diversity that has tried to resist centuries of colonization” is at risk.

Property Over Life: the Outcome of a Concerted Attack

“I prefer to have a homophobe or racist as a president than a thief,” supporters of the far-right Bolsonaro argue when confronted over their political preference. It is difficult to imagine how one could weigh and compare the value of the lives of racial minorities and members of the LGBTQI community with that of potentially stolen property, but not all of them have to. Some of his supporters see themselves mirrored in Bolsonaro — they are homophobes, racists, misogynists, and xenophobes.


RELATED:
Bolsonaro Vows To Purge Brazil of Left-wing ‘Crooks,’ Designate them as 'Terrorists'

Bolsonaro supporters are behind at least 50 separate attacks against left-wing activists and LGBTQI groups since Sept. 30.

Most recently, on Oct. 16 a group of Bolsonaro supporters murdered a transgender person outside a bar after a political argument. According to witnesses, the four men were yelling “Bolsonaro” and “Ele Sim,” or "Yes, Him." In another attack, a 19-year-old woman who was wearing a "Not Him" T-shirt was beaten by a group of men who carved a swastika into her body.

This well-documented trend is particularly worrisome given the high incidence of violence against LGBTQI groups in Brazil. Statistics by the Brazilian Grupo Gay de Bahia NGO reveal that every 19 hours a member of the community is either murdered or commits suicide.

Political violence in Brazil is also targeting working-class, impoverished populations, and their political leaders like 38-year-old Marielle Franco, a Black and lesbian councilwoman from Rio de Janeiro who fearlessly opposed the militarization of Rio’s favelas; a security strategy Bolsonaro ardently supports despite the fact that in the first six months of the intervention, ordered by un-elected President Michel Temer in early 2018, the Intervention Observatory registered a record 6,000 shoot-outs and a 38 percent increase in police-related deaths.

“What worries me is that Bolsonaro mobilizes groups with a fascist ideology, who defend White supremacy — it is undoubtedly a terrorist movement but they are not being called that despite their actions — and with Bolsonaro in the executive power the risk is the institutionalization of the militias and more state violence,” Werner warned, echoing the concern of many more who are saying Not Him.

The other Brazilians, who support him despite not being xenophobes, are victims of what Werner calls centuries of “colonized thinking.” That would explain the senselessness of members of the LGBTQI community, women and non-Whites voting for Bolsonaro just because it is an anti-PT vote.

The “thief president” and “anti-Communism” discourse used by Brazilian elites is fabricated, but responds to the country’s structural divide between a “whitened” South and an Afro-Indigenous North, Werner explains. Lula was imprisoned during the electoral process and he, “a man that belongs to the Northeast region of the country, an impoverished region with greater Indigenous and Afro influence,” is key in the anti-PT campaign.

For Pilar Troya, the fertile ground for the reigning narrative in Brazil is the 2014 crisis, “which led to the coup and detonated the institutional crisis. The coup (that ousted president Rousseff) was viable with a congressional majority, with the supposed intention to end the crisis and eradicate corruption but it has been a total failure on both fronts … the coup has only dismantled all social programs and undermined the impoverished population’s economic and social rights.”

Anti-communism is also closely linked to a narrative of the economic crisis that places blame on impoverished communities; the old tale of fiscal responsibility that frowns upon state investment to secure rights but celebrates tax breaks for the wealthy.

“Bolsonaro’s campaign is built on the notion that the left, more specifically the PT, and LGBT people, feminists, Afro-Brazilians, and Indigenous are responsible for the crisis and all social problems,” Troya says.

The variety of the people targeted by the Bolsonaro frenzy has made the need for a broad front that can effectively oppose these politics of intimidation and death very clear.

This need has been recognized and responded to by the feminist movement, which has assumed the role of leading nationwide mobilizations against Bolsonaro that are defending not only women’s rights but the right to diversity, democracy — or at least the possibility of its “full realization,” as Werner prefers — and human rights.

Through these movements, they are articulating the sentiments of vast sectors of Brazil’s disenfranchised population under a non-statist, non-patriarchal emancipatory narrative that brings together purple, rainbow and red flags.

The word polarization has dominated the news of Brazil’s election but there is also an increasing convergence of Brazil’s popular sectors that have a common enemy: fascism.

“We know historically what oppression is and we have denounced and resisted it for a long time. If now our central role is so evident is because the Capitalist system is in crisis and it is placing all human life — which is diverse, non-White, and non-heteronormative — at risk,” Werner argues stressing that women’s role in popular struggles is not new.

According to her, “participatory democracy is a dream gestated and birthed by women, in every sense. It is not about a political candidate, it is about ourselves, our lives and the lives of the people we level.”

However, after the elections, it is difficult to know if Brazil’s feminism will be able to maintain and expand that role and to overcome the classic subordination of identity politics to economic ones.

“It doesn’t seem like a simple task,” Troya argues. “This time different types of feminists and all types of left and popular movements united because Bolsonaro threatens the rights of the most vulnerable (including impoverished women and the majority of Afro-Brazilians and Indigenous) with his ultra-neoliberal economics, as well as the identity politics heralded by part of the feminist and LGBT movement with his neofascist social conservatism.”

Come what may of the current mobilizations and the outstanding resistance, women in Brazil are mounting pressure against fascism, Rita Segato, anthropologist and feminist activist from the University of Brasilia, argued in an interview with teleSUR.

The popularization of feminism comes not only from alliances and an increasingly broader agenda but also from the ability of the feminist movement to overcome their own institutionalization, returning to the streets from which they emerged in the 60s and 70s.

For Segato, the emancipatory potential of the Not Him movement is “for women to see themselves together and understand that they are a political force. ... From the ashes, a women’s politics has emerged and it is the only one capable of transforming the world, of reorienting history in a direction of more good for more people because it is different from patriarchal politics,” a politics of domination, force, and death."

A political option in response to the Marine Le Pens, Matteo Salvinis, Viktor Orbans, and Jair Bolsonaros of the world who are shamelessly attacking multiculturalism despite it being merely a politics of redistribution that does not question the mode of production, according to Segato.

Aside from economic neoliberal dogma, they all share an utter disregard for the lives of economically, socially, and politically marginalized populations.

From Brazil, Werner sees the emerging right-wing as paradoxical "it is old in its concept, what has changed is the technological capacities of their weapons, their modes of fighting but the ends remain the same, everything is necropolitics, Capitalism, and patriarchy while they use the tools of biopower and the subjugation of bodies and entire populations. Old ideas, new artillery."