Former Brazilian President Luiz Inacio Lula da Silva was charged, interrogated, convicted and sentenced to over 12 years in prison by Judge Sergio Moro without a shred of evidence. So who exactly is this judicial maverick who's consistently denied higher court rulings favoring Lula's defence team? 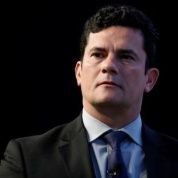 Moro began his crusade by issuing a search warrant targeting Lula's home. As Lula himself said: "The PF (Federal Police) even lifted my mattress looking for money," yet the incident failed to produce a shred of evidence to convict Lula on charges of passive corruption and money laundering.

Brazil's Supreme Court then warned Moro to cease his investigations, but to no avail. Just before interrogations began, the judge leaked a private telephone call between Lula and his successor, Dilma Rousseff, to the media. Still, no evidence surfaced to corroborate Lula's alleged wrongdoing.

On July 12 of last year, Judge Moro convicted Lula based on a slew of random assumptions, as well as a series of forced plea-bargain deals related to the infamous Car Wash investigations.

"President Lula is innocent," his defence lawyers said in a statement. "No credible evidence of guilt has been produced, and overwhelming proof of his innocence blatantly ignored.

"This politically motivated judgement attacks Brazil's rule of law, democracy and Lula's basic human rights. It is of immense concern to the Brazilian people and to the international community."

Lula's conviction was later upheld by the Federal Regional Court of the 4th Region (TRF-4) in Porto Alegre. In January 2018, his sentence was increased to a total of 12 years and one month in prison.

Several habeas corpus appeals were then submitted to the courts, but all bar one were denied: TRF-4 Judge Rogerio Favreto granted Lula's release in order that he could appeal his conviction as a free man, a right guaranteed by Brazil's Constitution.

However, the release order was short-lived. Two judges reversed the ruling on the same day, keeping Lula behind bars – as he has been since April 7 – at the federal police headquarters in Curitiba, Parana.

Legal observers, both national and international, have characterized the case built against Lula as a clear example of lawfare. Their concern has been backed by Moro's historical trajectory and the fact Lula has easily led every presidential poll in the lead up to elections in October.

Moro's resume cites his participation in the Program of Instruction for Lawyers at Harvard Law School in July 1998. He was also a participant in the International Visitors Program organized in 2007 by the U.S. State Department, which included visits to several U.S. agencies and institutions responsible for preventing and combating money laundering.

Rosangela's connections are reason alone for her husband to recuse himself from any and all investigations dealing with the Car Wash scandal, as well as Lula, according to Carta Maior.

Article 134 of the Civil Procedure Code orders the removal of a judge from any investigation when his or her "spouse or any other parent" has any personal or private relationship with any individual or group of people under investigation.

Those who benefited most from Dilma's impeachment in 2016 and Lula's imprisonment two years later are PSDB and multinational oil corporations, both clients of Moro's wife.

In March, Moro traveled to New York City where he was awarded the Personality of the Year Award by the Brazilian-America Chamber of Commerce. During the gala he posed alongside the mayor of Sao Paulo, Joao Doria.

Another photo shows the judge posing alongside Doria, as well as Fernando Capez, the former president of Sao Paulo's Legislative Assembly, according to the Huffington Post. This distinguished gentleman is being investigated in the state's school-lunch mafia scandal: school administrators stealing state funds intended to pay for nutritious meals for public schoolchildren.

The images prompted outrage among Workers' Party supporters and others favoring Lula's presidential candidacy. Rio de Janeiro Congressman Wadih Damous threatened to denounce Moro before the National Council of Justice (CNJ), claiming the judge had committed a grave violation of the Code of Magistrature Ethics.

"We are faced with a grave conflict-of-interest case involving Judge Sergio Moro, Petrobras and the law offices based in Sao Paulo," Damous said.

"It's the duty of judges to refuse benefits or advantages of public entities, of private companies or a private individual that or who can compromise their independent functioning.”

Before his New York stint, Moro posed smiling alongside Mina Gerais Senator Aecio Neves, who was investigated in the ongoing Car Wash scandal. This time the occasion was a formal get-together organized by the magazine IstoÉ, which honored the judge as Brazilian Justice of the Year.

In 2016, the year senate-imposed President Michel Temer came to power after Dilma Rousseff was impeached, Fortune magazine ranked Moro number 13 on its list of 'World's Greatest Leaders': the only Brazilian to appear on the 50-person list.

WikiLeaks also published an internal document from the U.S. State Department, which revealed the organization created a course in 2009 to train members of Brazil's justice system, particularly those in Curitiba, where Lula is currently being detained.

The seminar, titled 'Project Bridges: Building Bridges to Apply the Law in Brazil,' was attended by Moro and sought to consolidate bilateral training to deal with legal issues and matters related to counter-terrorism, according to Opera Mundi.

Judges, public prosecutors and 50 federal police officers from Brazil's 26 states participated in the seminar. In fact, Brazil's delegation was the largest group at the event, which included participants from Mexico, Costa Rica, Panama, Argentina, Uruguay and Paraguay.

The floodgates have been left open since Lula was imprisoned. As he states in his most recent letter, it has been habitual throughout Brazilian history that a significant part of the elite class "aligned themselves" with foreign interests, aiding in the strategic attempt to "destabilize the constitutional order."

"My imprisonment and persecution is part of this national submission project," Lula writes. "Temer's government and his supporters have dedicated themselves to destroying the historic development we achieved in our country."

Lula's two terms in office were marked by a slew of social programs, lifting millions of Brazilians out of poverty and removing the country from the United Nations World Hunger Map. He left office with a record approval rating of 83 percent in 2011, according to Datafolha.

Amid the dismantling of the Brazilian state; a 20-year freeze on public spending, and the stripping of workers' rights and social programs, he has topped every 2018 electoral poll conducted by Vox Populi, Ibope, Datafolha, Data Poder 360, Instituto Parana, the National Confederation of Transportation/MDA and Ipsos.

Judge Moro may very well factor in as a key element in the 'national submission project,' convicting the former head of state without providing a shred of evidence.