Former President Luiz Inacio Lula da Silva once said he "never thought that putting a plate of food on a poor man's table would generate so much hatred from an elite that never tires of throwing food away every day." 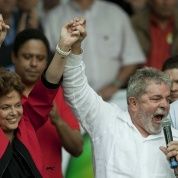 Such comments could explain the constant attacks directed at the Workers' Party (PT) and both former presidents, Lula and Rousseff, while also providing context for why Lula left the presidency with an over 80 percent approval rate after his second term.

The PT gave more than just a "plate of food to the Brazilian people. As Brazilians prepare to go to the polls on Oct. 7 to elect the country's next president and new lawmakers, and while Lula remains the country's most popular politician, teleSUR looks at the achievements reached by 13 years of PT governments between 2003 and 2016.

In 2003, while the world's attention was on the illegal U.S.-led invasion of Iraq, a steelworker union leader, affectionately known as Lula, was declaring his own war, but against hunger and an unjust system that made Brazil one of the most unequal countries in the world. "My war was against hunger," said Lula during an event to commemorate the 10th anniversary of the emblematic program "Bolsa Familia" (roughly translated as Family Allowance).

The Lula and Dilma governments meant the development of social policies that translated into social benefits for citizens. With its complex social, economic and political plans, the PT government managed to lift around 50 million people out of poverty.

The milestone of this direct hit on inequality was the Bolsa Familia program. "Never have so many people left misery so quickly. Bolsa Familia removed 36 million people from extreme poverty in ten years." This was "the most important social inclusion program in the world," said former President Rousseff regarding the importance of the program during its ten-year anniversary celebration.

The Bolsa Familia is an income augmentation program with stipends of between US$16 and 150 monthly directly transferred to women to promote equality and prevent abuse often fueled by financial dependence to a husband or partner.  The benefit can only be recieved by those who can certify that young people in their care are being educated. Essentially, the head of the family has to prove that children between six and 15 are enrolled in, and attend at least 85 percent of classes in a school year, and any child under seven must always have their immunization records up to date.

A U.N. report in 2015 declared the Bolsa Familia program one of the most successful social programs in the world because it enabled and linked other social programs that endowed Brazilians with more and more rights.

This was achieved due to an important increase in the percentage of the country's income used for social policies. The current president, who took power through a parliamentary and unconstitutional coup, Michel Temer reduced this percentage, and introduced a constitutional modification in order to put a limit on it.

Another program that came into effect under the PT was "Mais Medicos" (More Doctors) which Dilma’s government had initiated. It had around 20,000 medical professionals, of which approximately 12,000 were Cuban doctors, and covered 73 percent of the Brazilian municipalities. The program reached 63 million people — a staggering number of those had never seen a doctor before in their lives.

In 2011 and in 2014, two specific plans were implemented in order to increase women's access to health. The first one was the "Rede Cegonha" (Stork Network) which broadened access to medical services for pregnant women, as well as neonatal screening tests to detect problems in the newborns and their mothers.

The creation of the "Minha Casa Minha Vida" (MCMV, or My House, My Life) program in 2009 meant for many, the possibility of realizing the dream of having a house of their own. In 2011, when Dilma took office, the MCMV was tweaked to improve women's autonomy. Women became the preferred signatories for deed ownership over the house.

The PT presidential candidate for October elections, Fernando Haddad, was the Education Minister, between 2005 and 2012, under Lula. During that time the Fund for Maintenance and Development of Basic Education and Valuation of Education Professionals (Fundeb) program was created to increase he number of enrolled school children. Also, the "Programa Universidade Para Todos" (University for All Program) was created in 2005, which managed to double the number of students in federal universities in the country. Never before had so many people studied in the higher education system in Brazil, as had during Lula's time.

With these education programs, 214 new technical schools were created and 140 were bolstered. 126 university campuses were built and 14 new universities were created.

Another sector that saw development and progress under the PT governments were family farms. At least 70 percent of the food consumed in Brazil is now produced inside the country, by Campesino men and women farmers.

The employment rate was at it's highest in Brazil under the PT government as millions of jobs were created. In addition, the minimum wage imposed during those years represented the greatest purchasing power for Brazilian workers since 1979.

These social achievements were reached without compromising the country's economic performance. In 2011, according to data from the World Bank and the International Monetary Fund, Brazil was the sixth most important economy in the world. The country's GDP measured in relation to the Purchase Power Parity (PPP), was seventh in the world. Between 2004 and 2013 period, as a result of these policies, Brazil grew by 30 percent, equivalent to an average annual increase of 2.6 percent.

Regardless, PT governments have been repeatedly attacked by neoliberal forces in the country. They saw it plain and simple the redistribution of wealth that narrowed the inequality gap as political ploys to make PT governments more popular among sections of the population.

Such policies threaten the right-wing political elite because the people that benefit from them are unlikely to ever elect neoliberal governments into power that could seek to undermine the programs implemented by the governments of Lula and Dilma.

Thus, this election represents a referendum on those programs and achievements as working class Brazilians seek to protect and reinforce such policies by electing an executive branch and representatives in Congress that would help maintain them.