Chile declared war on Peru and Bolivia in 1879 after a tariff dispute, starting what is known as the War of the Pacific. During the conflict, Chilean forces went north, annexing significant portions of their neighbors’ territory in the process. 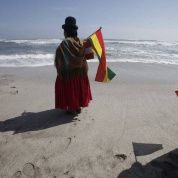 After the signing of the truce between Bolivia and Chile in 1884, the entire Bolivian coast – in addition to Peru’s southern territory, came under Chilean control.

The so-called Treaty of Peace and Friendship of 1904 was intended to formally cement the new post-war borders, effectively leaving Bolivia without access to the sea.

Emerging as the victor of the War of the Pacific, Chile claims that the terms of the 1904 treaty, which ratified its dominion over formerly Bolivian territory, remains valid and guarantees Bolivia railroad access to the Pacific coast. Bolivia however argues that it signed the agreement under duress and should not be regarded as binding.

In 1975-1976, the two countries entered into negotiations regarding a proposed exchange of territory that would provide Bolivia with a “corridor to the sea” and an adjacent maritime zone. At this time, both countries were ruled by right-wing military dictators (Hugo Banzer in Bolivia and Augusto Pinochet in Chile) and cooperated as part of Plan Condor, hunting down left-wing activists in the region.

The Chilean proposal to Bolivia was conditional, among other things, on Bolivia ceding an area of territory as compensation.

Despite the cozy relations between regimes, negotiations fell apart and the the two countries severed formal diplomatic ties in 1979.

Successive presidents have unsuccessfully tried to resolve the issue by diplomatic means, and full diplomatic ties have never been restored.

Relations have improved since 2006, when Bolivian president Evo Morales and Chilean-president Michelle Bachelet agreed on a 13-point agenda for bilateral discussions, including Bolivia's access to the sea.

After bilateral efforts to resolve the conflict fai le d , Bolivia sought arbitration in the territorial dispute through the Organization of American States , which refused to rule on the issue , insisting the matter should be resolved bilaterally .

Bolivia then submitted its case to the International Court of Justice in April 2013, requesting that the Court oblige Chile to enter negotiations with Bolivia over access to the Pacific Ocean.

The ICJ must now decide if it will hear the case. If it does, there is no obligation for Chile to respect the ruling. However, failure to do so may undermine its international standing and limit its ability to bring its own claims to the ICJ.

The first round of oral arguments began on Monday, where both Chile and Bolivia were granted opportunity to present their legal arguments to the court.

The ICJ is expected to make a decision on whether it will take up the case or not in late 2015, though a potential ruling on the dispute would take years.

Bolivian aspirations for sea access can be interpreted and understood on economic grounds. Since loosing territorial control, Bolivia became the second landlocked country in South America, forcing the country to rely on roadway infrastructure for commercial transportation.

According to the U.N. Economic Commission for Latin America and the Caribbean, Bolivia was rated as having the second worst transportation infrastructure in the entire continent, with only 7.1 percent of Bolivian roadways being paved.

Access to the sea would give it an opportunity decrease its dependency on commercial roads, but also to restructure its economic activities, reducing trade costs and developing a fishing sector to boost its economy.

The U.N. Convention on the Law of the Sea provides landlocked states with access to the sea such under certain conditions. This legal precedent provides solutions for the financial hardship of landlocked states, some of which are among the world's poorest states.

Despite the bilateral diplomatic tensions regarding the case, in a meeting last month between President Morales and President Michelle Bachelet, the two leaders said their governments would respect a ruling from the ICJ court on the border dispute.