Bolivians’ popular uprising in 2000 against Bechtel put the issue of water privatization and World Bank policies in the international spotlight. 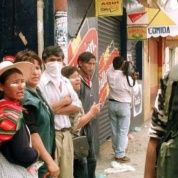 Over the last 60 years, some of Bolivia’s largest resistance struggles have targeted the devastating economic policies carried out by the International Monetary Fund and the World Bank.

The bulk of these protests focused on opposition to privatization policies and austerity measures, such as cuts to public services, privatization decrees, wage reductions, as well the weakening labor rights.

Bolivia’s economic dependence on the IMF and the World Bank escalated in the 1970s when the country contracted massive loans to finance the modernization of their mining and agriculture export industries, thereby meeting the needs of Northern countries and enriching a handful of transnational companies in the relevant sectors.

Gradually, IMF-driven reforms became the modus operandi for Bolivian elites; since upper class Bolivians did not suffer from the IMF-backed austerity measures, they had little sympathy for those bearing its costs.

By the mid 1980s, Bolivia had reached a severe debt crisis following a surge of foreign capital from mainly private international banks, recycling petrodollars in the aftermath of the oil shock in 1973–1974.

Between 1971 and 1981 Bolivia incurred more than US$3 billion of foreign debt.

Once in debt, the Bolivian government looked to the IMF for assistance in providing fresh loans with fiscal austerity stipulations attached in order to pay back private lenders.

Rather than deal with the short-term balance-of-payments crisis for what it was, the IMF forced the Bolivian government to divert much needed government funds away from social welfare programs, disproportionately affecting low-income workers who rely heavily on public services.

“IMF loans aimed to reduce the fiscal deficit through budget cuts which primarily resulted in the reduction of social spending,” Patricia Miranda from the Bolivian-based NGO Fundación Jubileo told teleSUR.

In Bolivia, the immediate effects of IMF policies have always fallen on the shoulders of the rural and urban working class, thanks to the government’s willingness to implement IMF demands such as income tax increases on low-wage earners.

“The increase of taxes on income without an alternative tributary reform proposal unleashed one of the biggest social crises the country had ever witnessed,” Miranda added.

This combined with the privatization of state enterprises and natural resources such as water and gas during the 1990s and early 2000s led to massive popular uprisings that posed a direct challenge to the legitimacy of the World Bank and the IMF.

In 2000, the World Bank encouraged the Bolivian government to sell the public water system of Cochabamba to the Bechtel Corporation.

The deal, which was negotiated behind closed doors between the World Bank and Bechtel representatives, granted the company control over the city’s water company for 40 years, guaranteeing them an average profit of 16 percent profit for each one of those years.

As a result of the Bechtel contract, monthly water bills skyrocketed by 43 percent for low-income households, according to the California-based nonprofit Democracy Center. Public protests and revolts began immediately after this decision was made, forcing the Bolivian government to cancel the contract with Bechtel.

This outcome was regarded as a first victory of popular movements after 15 years of Washington Consensus-inspired structural adjustment policies.

Over 15 years later, Bolivia’s relationship with the World Bank and the IMF has changed considerably as Bolivia is no longer subject to its conditions.

Since Bolivian President Evo Morales was first elected in 2005, the government has established a new set of guidelines which protects Bolivia’s economic autonomy from predatory lending institutions such as the IMF and the World Bank.

The Morales administration views autonomous economic governance as a central policy component to its larger political platform. Therefore, it has aimed to ensure that external financial assistance corresponds with the objectives of the government’s domestic development and fiscal agenda.

Under President Morales, disaster risk management has been a priority for the Bolivian government, which is frequently impacted by climate change-induced natural disasters, even though Bolivia is among the world’s smallest contributors to carbon emissions.

Last November, the Bolivian government approved the Disaster Risk Management Law, following the impacts of the early-2014 floods, which led to 50 deaths, 411,500 victims, and damages amounting to approximately US$384 million in Beni, Chuquisaca, Cochabamba, Potosi and La Paz departments.

In what at first glance might seem a return to policies of the past in efforts to strengthen its disaster management institutions, the Bolivian government signed its largest ever loan with the World Bank in February, receiving $200 million for disaster and climate risk management.

However this loan agreement grants the Bolivian government executive and administrative control over the allocation and distribution of the capital, which is indicative of the current set of relations between the two parties, Fundacion Jubileo’s Miranda explained to teleSUR.

Despite the recent capital loan, overall Bolivian public debt to the World Bank has fallen from 37 percent in 2005 to 9 percent in 2014.

In recent years, the Bolivian government has successfully managed to lessen its dependency on the IMF and the World Bank through increasing government royalties from the country’s hydrocarbon reserves (a policy that the IMF and World Bank opposed), which provided the government with sufficient financial independence in order to promote its own economic model.

Today the state is the main wealth generator in the country.

As a result, since 2006, social spending in the area of health, education, pensions, and poverty alleviation programs has increased over 45 percent.

However, if commodity prices continue to fall, Bolivia will then likely be forced rely on alternative sources for fiscal revenue in order to sustain its economic independence from institutions such as the World Bank and the IMF.

In the meantime, Bolivia can rely on its massive buildup of international reserves which has allowed it to avoid the often-harmful conditions that come with IMF and World Bank borrowing.

Bolivia’s success in recent years indicates a newly found independence for the country, which is now able to implement economic and social policies without the influence of the IMF and the World Bank.