“Mr. Evo Morales, it’s easy to make speeches about sovereignty and independence....come and govern, then you’ll see what it’s really like to administer the state” - Carlos Mesa, former president, and current opposition candidate said in 2005 in his resignation speech. 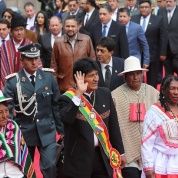 Bolivia has lived 13 years of the ‘process of change’ under the leadership of Evo Morales and the MAS (Movement Towards Socialism). Morales and the MAS were forged in a climate of radical street movements against privatization of natural resources. The MAS grouped together Indigenous social movements, with self-organized movements of the urban slums and what remained of the traditional Marxist left in the trade unions and the academy.

By 2005 this coalition came to represent the crystallization of the deep-seated resentment, not just at privatization, but of 500 years of colonialism, social exclusion and a neoliberal democracy that wasn’t able or willing to meet people’s basic needs.

Bolivia’s social movements and non-sectarian left grouped around the MAS and won at the ballot box in 2005. In January of this year, they face primary elections than presidential elections in November of this year. They’ve won every election since 2005 with larger majorities each time, this despite a constant manipulation of public information from private media, and right-wing attempts at destabilization.

Why? What has 13 years of the ‘process of change’ meant for the country beyond greater representation for the Indigenous? On the questions of economic development, health and education, foreign policy the critics of the MAS have predicted disaster but instead been met by the undeniable policy success.

Markets were jittery as the left took power in Bolivia. The Washington Consensus stated that only free markets, ‘flexible’ labor markets and monetarist policies could pave a path to economic development. Bolivia’s political class was determined to follow this religiously. Over 200 public companies were privatized, sold to foreign corporations at knockdown prices, this alone is thought to have damaged the economy to the tune of $22bn. What followed was a catastrophic fall in GDP and hyperinflation running at over 8000% by the end of 1985.

Despite this clear policy failure, many investors left the country as the left took power in 2005, fearing that “socialism” would bring economic ruin.

Though, over 13 years the left has presided over an economic miracle that even the IMF has had to admit that Bolivia is a clear cut success story. The economy has more than tripled in size, Bolivia is on course to be South America’s fastest growing economy for yet another year despite falls in the price of key exports.

Annual Inflation is running at a paltry 1.5 percent, whilst their neighbor Argentina sinks further into hyperinflation since adopting the neoliberal model that earned them praise from successive U.S. administrations.

Most important of all, the reduction in poverty has been the most impressive achievement of the MAS. When Morales took office, Bolivia was facing a humanitarian crisis with 60 percent of the total population living below the poverty line, that figure has been slashed in half by the MAS government.

This economic model that has produced these results is defined as a rejection of IMF recipes. Instead, Morales proceeded to nationalize Bolivia’s large strategic industries. Now that profits of those industries provided revenue for the state, those profits were used on capital spending, most notably on a massive integrated infrastructure plan that has been a crucial factor stimulating wider growth. State transport and manufacturing initiatives have also kick-started economic development in areas the free-market had never reached.

A common refrain amongst Morales’ critics is that they’ve made little progress on health and education and that those vital services continue in state disrepair. One can expect this line to continue in the right wing media, even as the government is registering citizens for free universal healthcare.

It is true that Bolivia still until recently had lacked a comprehensive and public health system, as exists in Cuba. However, the situation in health and education has vastly improved, it’s just that it has mostly benefited the rural poor whose voices are not and have never been represented in the mainstream urban press.

Between 2006 and 2018, the ‘Mi Salud’ program, operating with the help of Cuban doctors, has provided 16.4 million free health appointments, including 700,000 free eye surgeries in what's known as ‘operation miracle’. These programmes involve reaching the poorest and most isolated, often going to their homes in far out areas of the Amazonian and Andean regions.

In education, the changes have been transformative too, not that it garners much coverage in private media. In the year 2000, amidst the firesale privatizations, just 35,73 percent of primary school age children were enrolled in school, after 10 years of the MAS in power, that number more than doubled, and continues to grow.

Again, those benefiting are mostly the rural poor, an inauguration ceremony for a public school in isolated communities is an almost weekly occurrence, though only covered by state media outlets.

Implementing the universal health care system will nevertheless be a serious challenge in Bolivia. The Doctors Association is vehemently opposed and already protested and gone on strike against the plan for free health. Most doctors would stand to lose as business for their private clinics dries up.

“In our view this was a grave error. Blaming others for your internal problems is not the way to cultivate bilateral relations.” - Former U.S. ambassador Philip Goldberg on being expelled from the country

The year 2003 was one of Bolivia’s worst years in recent history, not only was it the year of the ‘Black October’ massacre, but it was also one of the most brazen transfers of sovereignty to the U.S.. In 2003 an agreement was signed to give legal immunity to all U.S. soldiers and citizens in Bolivian territory, they had free reign to violate national laws and would not have to face justice unless it was at the request of the U.S. government.

The U.S. presence in Bolivia, through military advisors and bases, was part of Washington’s “War on Drugs” policy in the region that has historically allowed it access and interference in the internal affairs of Latin American countries.

In a rejection to such practices by the United States and in a clear signal that the people and their representatives will have full sovereignty over their country’s affairs and resources, Morales expelled the U.S. military bases in Bolivia, as well as the presence of the DEA and USAID along with the U.S. ambassador.

The country’s strategic industries were nationalized, therefore bringing back key decisions over development. Conventional wisdom would dictate that the size of U.S. investments in Bolivia mean that good relations must be maintained despite abuses and violations of sovereignty. Though, Bolivia has thrived since clawing back its independence.

The reactions in Bolivia to Brazil’s far-right President Jair Bolsonaro gives a glimpse of how the country risks slipping back into a foreign policy of dependency. Bolivia sells large amounts of natural gas to Brazil and needs cooperation with them to combat trafficking and other issues on the border. Morales will have to maintain relations and has done so. However, he has been quick to stand up for Bolivia’s interests when there has been a lack of respect, like when one of Bolsonaro’s deputies made racists comments about Indigenous communities.

Evo publicly denounced the attack and demanded an apology. Whereas opposition candidates and activists claimed ‘we have to get on with our neighbors’. The deputy Rafael Quispe, an Indigenous deputy for the right-wing opposition claims to ‘not be offended’ by anti-Indigenous racism because ‘we have to get on with Brazil’. Opposition candidate to the presidency, Victor Hugo Cardenas (also Indigenous), actively celebrated Bolsonaro’s victory and seeks to replicate his ultra-conservative populism.

Submission to unequal foreign relations, whether that's the U.S. or Brazil, does not represent ‘good relations’, it represents a defeat and humiliation of a government's foreign policy.

Since taking power at the ballot box, the MAS has made profound changes to a country that had been in a state of ruin for a number of years following ‘structural adjustment’ (neoliberalism), and if Morales wins again this year then the process will have to deepen to overcome the challenges Bolivia still faces.

The role of the social movements and Morales’ government in recuperating a sense of cultural pride is recognized all over the world, as is the achievements on greater social inclusion for the country’s historically excluded communities.

Though, as the ‘process of change’ enters its 13th year, wider changes are worth analyzing. The process of recuperating economic and political sovereignty, together with the economic success that's been sustained despite the crisis across the region and the low prices of its key exports.

The model of nationalizing strategic sectors and using its revenues for big capital spending for the common good can serve as a model for the rising left globally. Whether for Jeremy Corbyn in Britain, or Jean Luc-Melenchon in France, studying the Bolivian model will be crucial in building post-neoliberal economies.