27 June 2018 - 08:44 AM
Analysis
Mexico: Families Maneuver Between Complicit Gov't and Brutal Cartels in Risky Search for the Disappeared
0

Between 2017 and April 2018, Mexico's National Data Registry for Missing or Disappeared People registered 36,265 people whose whereabouts are unknown. This means there are thousands of families tirelessly looking for their relatives across the country, doing what the authorities have no intention of doing, exposing them to dangerous consequences they are likely to encounter dealing with their relatives kidnappers with no state protection. 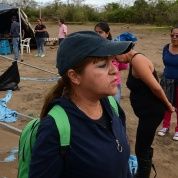 If the authorities are not looking for your missing relative and the case is filed among thousands of other cases forgotten in a dusty shelf in a police station, you start searching by yourself. However, you have to get ready to deal with an incompetent, and at times complicit law enforcement, as well as dangerous criminal groups and drug cartels who are might be connected to the dispearces themselves.

Maria Virginia left her home in Veracruz on 2013 and never came back. Her mother Rosita Feliciano and her sister Maria Estefania joined the Cordoba-Orizaba Collective of Missing People's Families and had been looking for her since then, taking part in marches, sit-ins, meetings with authorities and explorations in search for any clue leading to finding her, including illegal mass graves.

They are some of many mothers, sisters, fathers and friends looking for their beloved ones by themselves as the authorities do little to actually find missing people. Maria Virginia's case was filed under the investigation number 774/EXT/2013 and nothing else was known.

But the family suffered again from a terrible loss. After six years of looking for her sister, Maria Estefania was gunned down by unknown men in front of her children on May 23, 2018.

People looking for their missing relatives often find difficult and painful obstacles, trapped in a blurry line between a negligent, corrupt government and omnipresent criminal organizations.

Such is the case of the Colectivo Solecito, a social organization searching for missing people in Veracruz, one of the states with the highest rates of disappeared people in Mexico. In was founded in 2013 by mothers looking for their missing children and it's completely independent of the government, financing themselves by several fund rising activities.

“We're facing a total indifference from the government, so we're trying to fill a void left by the government, because the disappearances are an issue that the government treats only marginally and it's not directly involved with it,” Lucia Diaz, spokeswoman of Colectivo Solecito, told teleSUR, “So, when are they going to find them if they're not looking for them?”

Diaz joined other mothers in their search when her own child went missing in 2013. They found each other in their search for truth, to shed light on what happened to their beloved ones, and that's what keeps them together despite all struggles.

“We always say we're not looking for guilty people, but missing people. We don't want any trouble, but risks don't prevent us from searching for them,” said Diaz.

“The collective is a national referent of search and resistance. It assumes the job of the government and it does it well, with dignity and integrity.” said Diaz.

When the discovery was made in 2017, the new Attorney-General of Veracruz Jorge Winckler, admitted that the former administration of Javier Duarte fooled the collectives looking for their relatives into thinking they were doing DNA tests on the remains. In fact, he says, that didn't happen.

“That was a lie, it wasn't done. They were simply fooled,” said Winckler in interview with Animal Politico.

That's the kind of negligence Colectivo Solecito and others across the state have to face when looking for their relatives.

“The government won't defend us, won't protect us. Of course they won't bring justice, because impunity in Mexico is at 99 percent in official numbers. The whole of the Mexican justice system suffers from impunity,” said Diaz.

According to Mexico's impunity index, 93 percent of crimes are not even filed due to lack of trust in the legal system. Out of those, only 11 percent of cases are processed and only 4 of those produce a result, whatever it is. At the end, impunity sits at 99.3 percent.

Still, they're aware they need the help of the government to carry out their own searches and inquiries. As a self-financed collective of mothers, there are certain things they can't do themselves, like specialized forensic research, even though they have organized forensic anthropology courses for themselves.

“We can do our investigations up to certain point but at the end somethings are the responsibility of the government,” she said.

And besides the situation with the government, people looking for their missing relatives have to confront another face of Mexico's society: organized crime.

Often in collusion with the government, drug cartel and other criminal organizations are responsible for a great part of those disappearances. “We're between criminals and criminal authorities that won't be very benevolent if they see any information that could affect them, so we're in a very compromising situation ourselves,” said Diaz.

Colectivo Solecito has a number of stories in which they've been threatened by cartels. They were once stopped by a group of armed men when exiting a search area, before they let them go. Recently, a mother was asked for money by a cartel in exchange for permission to continue selling used clothes, which she was doing in support of the collective. When they found out what she was doing, they let her go and even asked what they could do to help her.

“They were even more considerate than the government, but we're still walking a fine line,” she said.

on Mother's Day in 2016, when the collective was commemorating their struggle, a group of men got down of a truck, approached them and handed them in a rudimentary map on a piece of paper, pointing several points in the area. The map led them to further mass graves in which they're currently working.

Necessity has pushed social groups like Colectivo Solecito to do what they now do. Past governments have failed them, such as Veracruz’s past administration. Duarte, from the Institutional Revolutionary Party, or PRI, was arrested on several corruption charges including embezzlement and organized crime.

The story of his party is that of a decadent political system and is widely regarded by Mexicans as part of the problem more than a possible solution, and that’s being reflected in the polls for July 1 elections. Their candidate, Jose Antonio Meade, unsuccessfully tries to present himself as a different face of the party, while at the same time proposing the same kind policies that Mexicans are fed up with.

The other party in Mexico’s political establishment, the National Action Party (PAN), was considered a hope for change in the 1990s and ruled the federal government between 2000-2012, including the first years of the war on drugs that took the country into a spiral of violence that doesn’t seem to have an end.

Ricardo Anaya, who is polling in second place in opinion polls for Sunday’s elections, proposes reinforcing the state’s security forces following the same line as the current and past presidents. Such policy has proven useless, as the number of deaths and disappeared people has only increased with time.

And then comes Andres Manuel Lopez Obrador, the center-left front-runner, who has promised to take a different approach on crime and proposes an integral platform to prevent youth from getting involved in organized crime. He has also promised amnesties for people that committed minor drug-related crimes in an effort to pacify and re-conciliate society, something that has been widely criticized by sectors of the right. However, his own past party, the Democratic Revolution Party, was directly involved in the disappearance of the 43 students of Ayotzinapa in 2014, a stain that many have decided to ignore.

The families, friends and schoolmates of the 43 missing students are still looking for them faithfully, hoping to find them alive, and they won't stop even if the government tells them they were killed and burned by a drug cartel. They won't believe the government's story, as it has been proven false by independent investigators, as now they know the government was involved. They can't trust them, and they are carrying out the search by themselves.

Whatever happens, the mothers of Colectivo Solecito and the relatives and friends of the thousands of disappeared people in Mexico will still look for their beloved ones without rest, until they find them, and most certainly won’t wait until a savior is sworn into office. They know a single person can’t change the political system and they would rather keep looking by themselves before waiting until somebody else does something.

At the end, it’s them who feel a stronger urge to search for their own relatives and family members, and they won’t sit around with their arms crossed. “We bend but we don't break because when you have a government like Mexico's, a null government, you do what you need to do or you will never find your child,” said Diaz.