Steve Bannon, the former White House chief strategist for the Trump administration and frequent doomsdayer, has endorsed far-right candidate Jair Bolsonaro in his bid for the Brazilian presidency. The run-off election will take place on Sunday, October 28, between Bolsonaro and Worker's Party candidate Fernando Haddad. 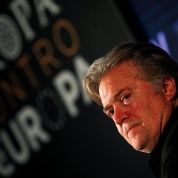 RELATED:
Bolsonaro No-Show as Haddad Claims, 'People Do Not Fear Him'

Bannon is an unusual figure in politics, but then, so is his former boss, Trump. Bannon has gone from being a Goldman Sachs banker to Breitbart News chief and was integral to the construction of Trump’s America First doctrine. He has since been forced out of Trump’s services in the White House barely eight months into his tenure and was forced to step down from Breitbart News a few months after.

Since his departure from the White House and Breitbart, Bannon has been on a campaign through Europe to bolster far-right movements internationally. The platform is called ‘The Movement.' Until recently, Bannon’s efforts have largely been concentrated in Europe, notably in France and Italy.

Bannon has won the interest of Italy’s Deputy Prime Minister Matteo Silvini, and Hungary’s Prime Minister Viktor Orban. Marine Le Pen, a far-right politician in France who ran for president in 2017, has said she is keeping her distance from Bannon, as he is American and not European. However, Louis Aliot, a leader of the National Rally Party (RN), says they intend to work with him.

“We support his initiative but we are not yet members of his foundation . . . We will certainly join his project,” she said.

Now Bannon’s sights appear to have shifted with the season, from Europe to South America, as Brazil’s presidential elections lift far-right politics to the headlines. “Captain Bolsonaro is a Brazilian patriot, and I believe a great leader for his country at this historic moment,” Bannon said.

Bannon ongoing campaign to promote an international platform for far-right populist and nationalist politics has officially entered the Global South.

However, Shane Burley, author of Fascism Today: What It Is and How to End It, says that for all of Bannon’s talk, he is not as powerful as he may claim to be.

“Here’s the thing about Bannon, he is the king of fake and failed projects. I have yet to see this movement be specifically useful to the rise of populism.” Burley told teleSUR.

“That being said, the rise of far-right populism is doing totally fine without Bannon and they are scary on their own face even without Bannon,” he adds.

The Movement, which has been gaining publicity since Bannon’s joined ranks, was formed in 2017 by Belgian right-wing politician Mischael Modrikamen. Bannon officially signed on this summer, in part as a financial backer. The two men plan to launch the organization with an inaugural summit in Bruxelles come January.

It may seem contradictory, a nationalist-yet-global movement, but it has existed for over a year now. In recent weeks, media reports have revealed that its reach has stretched into Brazil.

Earlier in October, Bolsonaro, of the Social Liberal Party (SLP), denied claims that Steve Bannon was advising his presidential campaign after his son, Eduardo Bolsonaro, shared a photo with Bannon.

“We had a great conversation and we share the same worldview. He said be (sic) an enthusiast of Bolsonaro's campaign and we are certainly in touch to join forces, especially against cultural Marxism,” Eduardo Bolsonaro tweeted.

Bolsonaro currently leads the latest election polls by 12 points ahead of his opponent, Fernand Haddad of the PT, according to Datafohla. The margin has been closing as the runoff election draws nearer.

Bolsonaro lost his edge by six points from last week though he still maintains a prominent lead.

“The populist movement is a global phenomenon,” Bannon told Reuters. “The trend is definitely in our favor and that’s why I think Bolsonaro will win big.”

Much like Trump, the far-right candidate has managed to stoke populist and nationalist sentiments. He is openly anti-immigrant, anti-LGBTQ equality, anti-abortion, and has made public statements both misogynistic and racist. He has openly supported Brazil’s brutal dictatorship that lasted from 1964 to 1985 which was backed by the CIA, suggesting a return to those times.

Most recently, just before his poll margin dropped, Bolsonaro threatened to purge leftists and Workers’ Party supporters from the country if elected.

“Bolsonaro is a very strong personality and Bannon has seemed to like populist movements that are founded on strong-man personalities -- like Trump,” Burley says. “That seems to speak to what he thinks is successful. And frankly, he’s probably right.”

Brazil is the ninth largest economy in the world and the largest in Latin America. If indeed Bolsonaro wins, it would mean a shift to a foreign policy resembling U.S. President Trump’s, including pulling out of the Paris Climate Accords and moving the Brazilian Embassy in Israel from Tel Aviv to Jerusalem.

“Just like he wants to make America great, I want to make Brazil great,” Bolsonaro said on the Roda Viva television program in July.

Bannon’s endorsement could be strategic, especially as it comes so late in the election campaign. With Bolsonaro poised to become the next president of Brazil, Bannon would be able to point to this as an example of The Movement’s success.

“By successfully pushing nationalism and populism in Brazil, he’s able to say that this is a model that works everywhere and it’s not explicitly racial,” Burley says. “What Bannon is really good at is pissing people off. But he’s not really good at showing results necessarily,” says Burley.

Bannon has a track record for stirring up animosity. Bannon and others who are actively promoting far-right populism and nationalism appear to be capitalizing on the frustrations of working class people in the extended wake of the 2008 financial crisis.

“The far-right comes from the same place the far-left comes from,” Burley says. “International capitalism has been in crisis and will only continue to be in more crisis. Essentially that anger, the working-class anger, can go in a number of directions. It can go left and it can go right, and it’s a lot easier for corporate funders to fund the right-ward dissent than the left-ward dissent.”

The global rise of far-right politics has come at an alarming rate, notably with the 2016 U.S. presidential elections. In his campaign, Trump used populist language similar to the messages used in the 2011 Occupy Wall Street movement, though with a far-right spin.

“I do think what it means is that we need a concerted break with what we’ve had before and to build mass movements that are going to actually meet the needs of people where they’re at,” Burley says.

If Bolsonaro is elected with the backing of Bannon and The Movement, it could very well mean dire consequences for Brazil and the Latin American region.

“I think if we don’t do anything, populist parties are going to sweep lots of places and the effect of that could be dramatic."