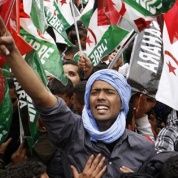 The Moroccan occupation is sapping the Western Saharan territory of its natural resources while subjecting the Indigenous population, the Sahrawi to widespread human rights abuses, according to campaigner Cate Lewis.

“Morocco is keen to present itself as the legitimate developer of industry in Western Sahara which they call their 'southern provinces'. It is a real support to this enterprise for countries to be trading with them in Sahrawi phosphate,” Lewis said.

She continued by explaining, “It is not defensible morally, as it is depleting the resources which belong to the Sahrawi people, on which an independent nation would rely for its economy.”

Morocco has occupied most of the Western Saharan territory since the mid 1970s. Until a United Nations brokered cease-fire came into force in the early 1990s, Morocco faced an armed uprising across Western Sahara, led by the Indigenous independence movement, the Polisario Front. Today, a thin strip of the territory's eastern desert is administered by the Polisario's partially recognized state, the Sahrawi Arab Democratic Republic. Under the U.N. cease-fire, both Morocco and SADR agreed to work towards holding a referendum of self-determination across the territory, though Sahrawi have long accused Morocco of reneging on that pledge.

ANALYSIS: No End in Sight for Morocco's Media Blackout in Western Sahara

Speaking to teleSUR on the 40th anniversary of SADR's founding, Lewis said 2016 would be a “very appropriate” year for the long-awaited referendum to finally be achieved.

However, she argued, a free and fair vote could still be a long way off, unless the international community does more to support human rights in Western Sahara.

She pointed to the efforts of Latin American countries like Cuba for long supporting human rights and development in Western Sahara.

“For many years Cuba has given Western Sahara wonderful educational support. Although it is a hardship for young Sahrawis to leave their families in the camps in order to benefit from the education offered, many have taken advantage of it and now provide the bulk of the Sahrawi health service and deliver much of the information technology needed in the Sahrawi refugee camps,” she explained, speaking on behalf of the Australian Western Sahara Association.

A pizza bar in a Western Saharan refugee camp displays the flags of SADR, Algeria and Cuba.

In late 2015, Cuba's Education Minister, Cira Pineiro Alonso, vowed to bolster support for education in Western Sahara, including renewed investment in the Simon Bolivar high school. Supported by both Cuba and Venezuela, the institution was the first high school to be constructed in SADR-administered Western Sahara. All of the school's students are refugees living in camps managed by the United Nations and SADR.

Before the school was constructed in 2011, the refugee camps had no high school, and students had little choice but to travel abroad to study.

“This program is a great example of the way a country with a good education system can support the Sahrawi people,” Lewis said.

She continued by arguing Western nations should follow the lead of countries like Cuba by providing developmental support for Western Sahara.

“Australia or the United States could do this, not necessarily in these fields, but in training for other professions or trades,” she said.