Mexico’s romance with neoliberalism has lasted for almost 40 years, but it might be coming to an end after Andres Manuel Lopez Obrador (AMLO) is sworn in as Mexico's new president. For many in Mexico and abroad, he represents the possibility for an alternative economic model that could battle Mexico’s entrenched socio-economic inequality. 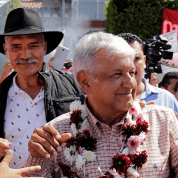 Lopez Obrador’s perceived anti-neoliberalism is rooted in the fact that he has promised voters to halt the wave of privatization unleashed by Enrique Peña Nieto’s Energy Reform. “We will fight to put an end on the privatization of Pemex, the electric industry and our cultural patrimony,” AMLO political program reads.

In 2014, Peña Nieto’s reform ended almost over seven decades of state ownership over Mexico's mineral and oil resources. Instead of bringing about an increase in fuel production, by 2016 Mexico became a net importer of United States-produced gasoline, leading to fuel prices increase and nationwide protests erupted.

Civil society organizations denounced the energy reform for hampering access to information and participation, highlighting that the Mexican government’s profits from the state-owned company would now go to private companies.

Lopez Obrador has vowed not only to stop bidding processes but also to review big infrastructure contracts with the commitment to reverse them in cases where corruption can be proved.

In a recent political rally in Merida, capital of the coastal province of Yucatan, which relies heavily on tourism, AMLO told his followers “we will no longer open bidding processes, we will not hand out… the sea on the Peninsula of Yucatan. We will issue licenses on the coast and the sea of Yucatan.”

Mexico’s neoliberal tale is defined by waves of privatization and adherence to the General Agreement on Tariffs and Trade (GATT) in the late eighties and the infamous North American Free Trade Agreement (NAFTA) in the mid-nineties.

For over three decades, every president after Miguel de la Madrid (1982 - 1988) has applied neoliberal economic policies, furthering the liberalization of financial markets and trade, and promoting the privatization of almost every important economic sector, from the iron and steel industry and banking in the eighties and nineties, to the most recent Energy Reform.

These policies have not translated into better living conditions for the many, but rather higher concentration of wealth that benefits for the few. According to Oxfam, in 2015, “the 10 richest people in the country [Mexico] accumulate the same wealth as the poorest 50 percent.”

AMLO’s political platform puts forth specific reforms in social policy and promotes a greater role for the state in strategic economic sectors. He has vowed to increase the minimum wage to levels that guarantee access to the basic basket, and supports the establishment of a universal public health and education system.

Obrador has also vowed to respect the San Andres Accords signed between the Zapatista Army of National Liberation and the Mexican government in 1996. The accords guarantee Indigenous peoples their right to control and manage their territories and resources and to be consulted on big infrastructure projects that could affect them.

He has also publicly opposed Peña Nieto’s controversial Law of Internal Security, which human rights advocates could lead to more state violence and crimes by giving military forces a role over internal, civilian security in a country where state security forces are directly linked to massacres, rapes and disappearances.

However, there are legitimate doubts about Lopez Obrador’s capacity to undermine the break with Mexico’s four decades of neoliberal dogma.

This January Royal Dutch Shell won nine licenses in the Gulf of Mexico. In February, AMLO’s top business adviser and future chief of staff, Alfonso Romo, assured Bloomberg news “there won’t be any legal violation or anything else that would disrupt investor confidence… What we’ve seen from the bidding process is that they’re very good for the country, they’re well done, and up until today we have no complaints.”

Also, critics point to Carlos Urzua, AMLO’s pick for secretary of finance and public credit, who has tried to appease investors and insurance companies, affirming that AMLO will respect the autonomy of Mexico’s Central Bank.

Other left-leaning voters complain that AMLO has avoided issues like the legalization of abortion and marriage equality. When asked about this, he has answered saying he would call for public referendums so the people of Mexico can decide on these issues, which continue to stir controversy in the Latin American country.

He has also been criticized for forging an electoral alliance with a socially conservative evangelical Christian party, Social Encounter Party.

However, there is hope that an AMLO government paired with vital social movements could help Mexico fight neoliberal predominance.

In a recent interview with teleSUR, professor and social movements expert Massimo Modonesi explained that the only possibility to combat the dominance of right-wing neoliberal dogma in Mexico’s current political scenario is a “reformist government in terms of not excessively neoliberal capitalism with a reactivation of anti-capitalist social and popular movements.”