On Saturday, Mexican president-elect Andres Manuel Lopez Obrador (AMLO) will assume the office of the presidency, gaining control over the country’s foreign policy and assuming the challenge of forcing United States President Donald Trump to "respect" Mexico and its citizens. 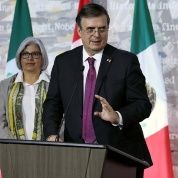 ANALYSIS:
AMLO: Window of Opportunity Against 40 Years of Neoliberalism in Mexico?

Lopez Obrador's "4th Transformation" is not limited to Mexico's battle against corruption and the reigning insecurity and violence that affects the lives of thousands, AMLO and the future foreign ministry will have to deal with a hostile northern neighbor while upholding Mexico’s principle of ‘non-intervention.’

During his presidential campaign, the last of three, Lopez Obrador visited several border towns on both sides of the Rio Grande as well as U.S. cities, addressing Mexican immigrants that see in him a hope to counter Trump’s divisive narrative.

Before winning the presidential elections, the outgoing government of Enrique Peña Nieto invited Trump to Mexico, a move criticized by a large sector of society because the tycoon, who was still a candidate, had used racists and sexists slurs against the Mexican people. Peña Nieto and his team argued that both candidates had been invited because they wanted to have good relations with the U.S. regardless of the elections’ outcome.

Peña Nieto even awarded Jared Kushner, Trump’s son-in-law and advisor, the country's highest honor for a foreign citizen, the "Aztec Eagle." All this despite the Trump administration's hostile attitudes.

Peña Nieto’s foreign policy, especially his abject behavior towards the U.S., has sparked anger among many who voted for Lopez Obrador and expect leadership that will demand a more respectful treatment. The president-elect is aware of that.

During his presidential campaign, AMLO appointed Hector Vasconcelos as his possible foreign minister. Among his first statements, Vasconcelos said Trump would be “forced” to respect the country and warned that the U.S.-Mexico joint policies and bilateral relations regarding the “war on drugs” would be reformulated. He also announced consulates in the U.S. would receive a bigger budget and more staff to improve attention to Mexican citizens and grant them legal counsel in U.S. courts.

As stated by Lopez Obrador, the future government won’t see migration as a problem in itself, recognizing it instead as part of human nature. Instead of battling immigration, he says he will fight against its root causes. AMLO believes Mexicans who migrate should do so because they want to, not because they have to and he has expressed the same for Central American immigrants.

Another important shift will be AMLO's role in Latin American integration and his return to the ‘non-intervention’ principles established by the Estrada Doctrine in 1930. "We must look south," a spokesperson for the future administration said in early November. These two shifts imply overcoming the U.S. dependency that defines Mexican foreign policy at the moment.

The Estrada Doctrine is expressly against countries deciding whether a foreign government is legitimate or not, especially when these are established by revolutionary movements. Upholding the doctrine has direct implications for Mexico's diplomatic relations with countries like Venezuela that has been targeted by the U.S.

The departure from the Estrada Doctrine was initiated around 2000 by former President Vicente Fox, of the National Action Party (PAN). Fox and his foreign ministers challenged the Estrada Doctrine and started criticizing governments they considered undemocratic, arguing that the ‘non-intervention’ policy had been used by the Revolutionary Institutional Party (PRI) for 70 years to justify its own actions while maintaining good relations with the international community.

One of Fox’s foreign ministers, Jorge Castañeda, even started to openly criticize the Cuban and Venezuelan governments, influenced by U.S. foreign policy.

Possibly the most remarkable moment in Mexico's distancing from its traditional policy was when in Fox called Fidel Castro in 2002 to tell him his presence at an International Conference in Monterrey represented a “great deal of problems” and ask him to leave after dinner.

The trend continued during the government of the right-wing hardliner Felipe Calderon, from the same party, and changed little after Enrique Peña Nieto took office in 2012.

But Lopez Obrador’s declarations suggest the new foreign policy will stick to the tradition of non-intervention while strengthening links with Latin America, based on a shared history and culture.

Mexico’s traditional foreign policy has its roots in its own internal struggles and political instability linked to the dispute between divergent forces since its independence. Incumbent governments had a hard time securing diplomatic recognition from foreign countries, especially after the turbulent years following the Mexican Revolution (1910).

As a result, the government of Pascual Ortiz Rubio developed the "Estrada Doctrine," named after Foreign Minister Genaro Estrada, to set an example for the rest of Latin America and counter the influence of the Ecuadorean "Tobar Doctrine" and general interventionist policies in the continent.

The doctrine established that recognizing or refusing to recognize a government represented a violation of the country’s sovereignty and paved the way for intervention. Vasconcelos’s declarations are a clear sign of a return to the Estrada Doctrine despite the fact that AMLO appointed Marcelo Ebrard, a former mayor of Mexico City, as his actual foreign minister.

Evidence of this shift is the fact that Lopez Obrador defended his invitation to Nicolas Maduro and Daniel Ortega, the Venezuelan and Nicaraguan presidents, to his swear-in ceremony, arguing that every head of state will be welcomed, in line with the tradition of non-interventionism.

Lopez Obrador has pledged to respect Mexico’s own political agenda without foreign intervention. He has said the country’s participation in the United Nations peacekeeping missions will continue, but it will be reviewed; relations with Asia and Latin America will be strengthened; Mexico will cooperate with the U.S. in migration issues, but it will keep its own perspective on the matter; and the Paris Agreement on climate change will be respected.

Even before taking office, Lopez Obrador has fulfilled some campaign promises through his National Renewal Movement (Morena), which took over both legislative houses, but he has backtracked on others. Only time will reveal how he and Ebrard react to the challenges of the international community.