The history of Cuba-U.S. relations has been fraught with tensions, state-sponsored terrorism directed at Cuba and blatant attempts to overthrow the revolutionary government in Havana. 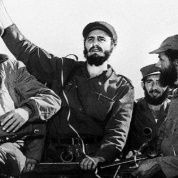 The following are key moments in Cuba-U.S. relations that served to define the relationship.

Declaration of the Socialist Nature of the Cuban Revolution

Aircraft that had been disguised to look like those belonging to Cuban Revolutionary Armed Forces bombed three sites in Cuba April 15, 1961. It was but the latest in a series of acts of terror and sabotage inflicted on Cuba by the enemies of the Cuban Revolution.

The surprise attack on the airports of Ciudad Libertad, San Antonio de Los Banos and Santiago was carried out by Cuban exiles with the support of the United States.

The next day, during the ceremony to bury the Cubans killed in the attack, Fidel Castro, leader of the Cuban Revolution declared, for the first time ever, the socialist nature of the revolution.

In the context of the Cold War between the United States and the Soviet Union, this declaration would serve to further exacerbate the animosity between the revolutionary government in Cuba and the U.S. government in Washington.

“That’s what they cannot forgive us, that we are there right in their noses, and that we have made a socialist revolution in the noses of the United States!” exclaimed Fidel in that same speech.

The attack on April 15 would prove to be only a prelude to the real mission of the CIA-sponsored attack on Cuba: the armed assault on Playa Giron, better known as the Bay of Pigs invasion.

Hours later, on the morning of April 17, a group of over 1,000 Cuban exiles and mercenaries landed on Playa Giron. Their ultimate goal was to oust, by armed force, the Cuban government.

The mercenaries were trained by the CIA in Nicaragua, taken to Cuba on boats chartered by the CIA, and used weapons provided by the CIA. That is to say, it was an operations conceived and carried out by the U.S. government with the approval of the U.S. president himself.

Fidel Castro himself led the defense during the invasion. One of the soldiers killed during battle wrote “Fidel” on a door with his own blood before succumbing to his injuries.

The invasion collapsed by April 19, the attack had been defeated.

The defeat of the invasion force by the Cuban people together with their Revolutionary Armed Forces served to consolidate popular support for the revolution and proved to be an example for the entire region.

After the failed Bay of Pigs invasion, revolutionaries throughout Latin America believed that U.S. imperialism could be defeated.

Aside from the defeat suffered by the United States and their allies in Vietnam, Bay of Pigs would come to be seen as one of the biggest embarrassments in the history of U.S. foreign policy.

The U.S. failure of the Bay of Pigs cemented the animosity between Cuba and the U.S. Although the latter would not attempt another invasion, it did not lessen their resolve to oust the revolutionary government.

The Mariel boat lift, which saw approximately 125,000 Cubans leave for the U.S., actually has its roots in the 1966 Cuban Adjustment Act. That law allows any Cuban who enters the United States to gain permanent residency after being present in the U.S. for one year and deliberately designed to promote the emigration of Cubans.

The opening up of the Mariel port in Cuba to anyone wishing to leave was prompted by two dangerous precursor events.

Encouraged by U.S. immigration laws, some Cubans began to hijack boats long-distance sea travel, such as tug boats, in an effort to reach Florida. These hijackings posed a considerable risk to both the coast guard and the occupants of the small vessels. It was an intolerable situation for the Cuban government.

The second incident was the storming of the Peruvian Embassy by a small group of Cubans, an act that aside from leaving one guard dead, also violated international law. This small group eventually turned into 10,000, a massive amount of people in a space that simply could not accommodate that many people.

In response, the revolutionary government opened up the Mariel port to anyone wishing to leave. This exacerbated tensions with the United States, which struggled with the influx of migrants. It also served to embolden the Florida Cuba lobby, which to this day opposes all efforts to normalize the relationship between Cuba and the United States.

This act remains one of the biggest impediments to the full restoration of relations. Its passage into law was a product of the U.S. government's tolerance of extremists within the Cuban exile community in Florida.

Were it not for this act of Congress, the U.S. blockade on Cuba would likely have been lifted already. Before 1996, as a foreign policy measure, the implementation or lifting the blockade was the purview of the U.S. president.

The passage of the Helms-Burton Act, which strengthened and extended the blockade, was signed into law on March 6, 1996 by then President Bill Clinton, who had been engaged in secret talks to reestablish diplomatic relations.

Those talks collapsed after Cuba shot down a plane belonging to Brothers to the Rescue, group led by Jose Basulto, a violent self-confessed terrorist opposed to the revolutionary government in Cuba.

RELATED: US Immigration Policy for Cuba: A Cold War Relic

Brothers to the Rescue, founded to purportedly rescue Cubans stranded at sea, had repeatedly incurred Cuban airspace in acts of deliberate provocation.

The flights were an affront to the Cuban government and they vehemently protested, telling the U.S. to act to suspend the flights.

According a 2014 article by The Atlantic, Fidel Castro was led to believe that the White House had finally agreed to end the provocative flights. When the flights by Brother to the Rescue resumed, the Cuban government was furious.

Their patience exhausted and believing they had been misled, on February 24, 1996 Cuban military jet shot down one of the Brothers to the Rescue planes, killing four U.S. citizens.

Clinton responded by signaling he would sign Helms-Burton into law, despite previously opposing the Republican-led bill.

Thanks to Helms-Burton, the blockade can only be lifted through a vote in Congress. According to Cuban officials, the blockade has cost Cuba US$833.7 billion in five decades.

The U.N. General Assembly has consistently voted overwhelmingly in favor of ending the blockade with 188 countries voting in favor of the resolution in the most recent vote and only the United States and Israel voting against it.

Despite the lengthy and complicated history, Obama and Cuban President Raul Castro announced a historic agreement on December 17, 2014 that opened the way for restored relations.

That announcement was the product of years of secret talks, spurred on by the cordial treatment of Raul Castro by Obama at the funeral of Nelson Mandela in 2013.

In August 2015, Cuba and the United States took another historic step in normalizing relations with the reopening of the U.S. Embassy in Havana.

The new relationship was further cemented with Obama's official visit to the island in March, though Cuban President Raul Castro has reiterated that the U.S. military base at Guantanamo Bay must be returned to Cuba and that the blockade needs to be lifted.

This monumental shift in such a storied relationship is sure to prompt new questions and challenges for the Cuban Revolution.