Just a month before the world celebrates Gay Pride Week, Chile passed a law that allows transgender citizens to change their name and sex on state registries without needing a sex-change operation. At the same time, Ecuador recognize a lesbian couple's legal right to adopt a child. 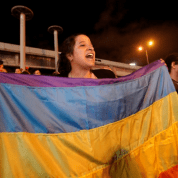 These and other monumental LGBTQI+ legal precedents in Latin America over the past decade are recalling the queer and transgender revolutionaries who began the movement more than 50 years ago.

Argentina was at the forefront of gay pride in Latin America. Gays in Argentina created Nuestro Mundo ('Our World') in 1967, considered South America's first public homosexual organization. In 1971, the Homosexual Liberation Front formed and two years later they started to publish the region's first gay magazine: Somos ('We Are').

But Argentine society experienced a whiplash against human rights, including those of gays and trans people, of every sort during the military government's Dirty War between 1976 and 1983, disappearing or killing up to 30,000 people. Their 'cleaning campaign' targeted gays in order to 'scare homosexuals from the streets to not bother decent people.'

Though Brazil was living through its own dictatorship from 1964 to 1985, the gay community there – and society in general – was experiencing a shift toward democracy by the late 1970s. Lampião ('The Lamp') gay newspaper began publishing in 1978 to become the 'primary communication vehicle for the homosexual community.'

A year later, São Paulo homosexuals formed the first openly gay organization, Somos, which was followed by a flurry of new gay and lesbian groups in Rio de Janeiro, Salvador, Curitiba and the Amazon. The Feminist-Lesbian Action Group staged what's considered Brazil's 'Stonewall' at Ferro's Bar in São Paulo, in 1983.

Gay activists managed to organize in Chile, even under the Augusto Pinochet (1973-1990) dictatorship. Integracion ('Integration') was the country's first gay group, founded in 1977.

The country's first lesbian organization – Feminist Lesbian Collective Ayuquelen, founded in 1984 – was important to homosexual and feminist rights and didn't seek to assimilate into conservative society like its predecessors. The group of women who led it were revolutionary because they formed after the highly conservative and patriarchal 1980 constitution made 'illegal' any transgressions against the state, family and the Catholic church.

Ayuquelen became a critical but small organization that worked to not only advance lesbian and gender rights but also helped return democracy to the country.

Like its South American neighbors, Mexico began to experience its own wave of gay rights movements in the 1970s. The Homosexual Liberation Front was Mexico's first gay organization, forming in 1971.

Nancy Cardenas became the first person in Mexico to publicly declare her homosexuality in 1973 and led Mexico's Gay Liberation Front (GLF). By 1978, several other LGBTQ rights organizations had formed that not only advocated for freedom of sexual expression in Mexico but the Cuban and Nicaraguan revolutions.

It was also in the 1980s and 90s that HIV and AIDS began to shake the Americas. The burden fell heaviest on the already socially discriminated gay, lesbian and trans communities.

Across Latin America, the Catholic church, so embedded in the region's social ethos, claimed the disease was a "divine intervention" to punish their gender and/or sexual orientation. Rights organizations had to not only fight discrimination but also the stigma of the disease that was so inaccurately linked to the gay and lesbian community.

Despite, or perhaps in part of this health epidemic, the '90s also became a decade when more people publicly began to express their gender and sexual identity.

The annual Festival Mix Brazil of Cinema and Video of Sexual Diversity was launched in 1993. Rio de Janeiro – widely considered one of Latin America's most LGBTQI-friendly neighborhoods – held Brazil's first Gay Pride parade in 1995, followed by Sao Paulo in 1997.

Argentina, always at the forefront of gay and trans rights, became the first country in Latin America to legalize gay marriage in 2010 after several of its cities allowed same-sex civil unions during the decade leading up to the national decision. Mexico City legalized gay marriage that same year, and it was approved across the country by 2017.

In 2013 homosexual marriage was legalized in Uruguay under the progressive government of Pepe Mujica, and in Brazil under Dilma Rousseff. By that time Brazil had already become the first Latin American country to legalize adoption for same-sex partners, doing so in 2010.

Unfortunately, Central American countries have either no laws to provide equal rights to gays and trans, or have punitive laws against them. Honduras banned same-sex marriage and gay adoptions in 2005 and El Salvador is working on similar legislation.

Costa Rica finally legalized gay marriage and transgender rights this year, but only after the Inter-American Court of Human Rights ordered it to do so.

One of the most pressing issues at the moment in the LGBTQI+ community in Latin America is the fact that its members are being murdered in record numbers by virtue of their sexual and gender orientation. The Transrespect versus Transphobia Worldwide (TvT) reports that of the 2,115 murders of transgender people worldwide between January 2008 and April 2016, 78 percent of them took place in Latin America, with Brazil experiencing the highest rate of killings.

Between 1980 and 2006, 2,680 gays and lesbians were murdered in Brazil for their sexual orientation, and only 10 percent of their killers served jail time, according to the Human Rights in Latin America Digest.

By 2012, Brazil's gay and trans community was living in a virtual state of emergency as one gay or trans became a murder victim of homophobia every 24 hours. Each year it gets worse: in 2017, 445 LGBTQI+ Brazilians were slain, up 30 percent from 2016. The Inter-American Commission on Human Rights (IACHR) has urged administrations to take strict action against homophobia, but to little avail.

"In the last decade, Brazil looked to produce policies that could protect vulnerable groups like gay and trans people, but they mostly failed due to lack of investment or change in vision of policy," Jurema Werneck, executive director at Amnesty International Brazil, told The Guardian in January.

Though nearly all South and Central American countries have on the books some legal regulation that bans anti-gay discrimination, these don't always protect trans people and they aren't widely enforced in the first place. No country, except Argentina, has an explicit law that calls it a hate crime to kill a person based on their sexual orientation or gender identity.

Argentina made history last week in a bittersweet victory for the LGBTQI community by using this law to convict 25-year-old Gabriel David Marino to life in prison for 'transvesticide': killing a transvestite by virtue of being a transvestite. He brutally murdered Diana Sacayan in her Buenos Aires apartment in 2015.

Though the law had been used to convict three times prior, this was the first time the judges used the term 'transvesticide' in Argentine legal history and was one of the heftiest sentences given for this type of crime.

This is the 50th anniversary of the Stonewall riots and while there have been some major legislative advances in Latin America for LGBTQI+ rights, there is still much to be done.