Brazil is on the cusp of a general election. On Sunday, Oct. 7, the people of Brazil will elect a new president and vice-president along with 81 members of Congress, 513 members of the lower chamber and 27 governors of States (counting the Federal District of Brasilia). 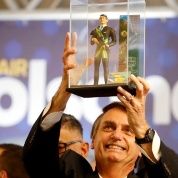 RELATED:
Brazil Elections: 13 Years of Achievements Under PT Gov'ts of Lula and Dilma

The elections are poised to be one of the most controversial in Brazil, in years. To inspect the magnitude of the presidential elections, teleSUR conducted three exclusive interviews with analysts: Brazilian journalist Norma Moura, Argentinian historian and activist Adrian Dubinsky and French professor of economy and sociology Benjamin Honorat.

This is not a "normal" election. It is the first election since Michel Temer came to power and after democratically elected ex-President Dilma Rousseff was ousted by an unconstitutional parliamentary coup.

"Temer's huge unpopularity (in June he was rated as the most unpopular president in Brazil's history) and the fact that no one directly voted to elect him, makes people see the elections as a return to legitimacy," Dubinsky noted, before adding that several streets across Brazil are painted with the slogan "Diretas Já" (direct and free elections now), similar to demands made during the military dictatorship (1964-1985).

Norma Moura described the presidential elections as "the end of the world elections," since significant polarization has been the starring element during the campaigns. For the supporters of the parties "only the victory matters, whether one side or the other is winning, half the population will be dissatisfied and even disgusted."

For Honorat, these elections are marked by the fact that "the Brazilian electorate is very discouraged about this election because Brazil is going through a crisis (...) Many people distrust that any candidate can solve the problems."

According to Brazilian media conglomerate O Globo, a study revealed that around 429 military and police officers are contesting popular office in the elections. In this scenario, the main representatives are former army captain Jair Bolsonaro - who is running for president - and his ballot mate Hamilton Mourao, both from Brazil's Social Liberty Party (PSL).

This marks the return of the military forces to politics. "It's not just a feeling, it's a reality," said journalist Moura. The scary part is that some people support the return because they believe that Brazil's politics is in a "general mess. This electorate is betting on militarism to contain what it views to be a communist and anarchist advance in the country," Moura explained.

"Bolsonaro with his speech opened the possibility, that is, made it not taboo. Now you can say that someone likes dictatorship without everyone being shocked. It means that the idea that 'the military were not so bad' is rising little by little," Honorat added.

The candidates linked to the security forces defend the idea that the recovery of military values, such as discipline, integrity and patriotism are the only pillars that can provide a solution to the crisis of political credibility in Brazil. But, these ideologies - applied in power situations - have been proved wrong, on many occasions, in history, as they usually turn to authoritarianism as well as a regression of the liberties and rights of human beings.

"Let's not forget that the Chief of the Armed Forces, General Villas Boas, threatened the possibility of an intervention in case Haddad won," Argentinian analyst Dubinsky pointed out.

The link between military forces and right-wing parties in ideology is not unusual in Latin America; with few exceptions such as Hugo Chavez in Venezuela and Juan Velasco Alvarado in Peru. This recent political rise of the armed forces is also part of the right-wing shift that has been acquiring steam in the Americas. In the case of Brazil, the idea is gaining traction as issues relating to insecurity rises.

"Security is a very common theme in Brazilian politics," Honorat told teleSUR. Analysts see this insertion of the military to politics as a certain path that will ensure a more authoritarian way of making politics.

Politics based on a firm hand and delivered by the military forces does not guarantee success, and the case of the militarization of Rio de Janeiro  - which was ordered by President Temer in February 2018 and will continue until December 2018 - is a perfect example. In the case of Rio, many people "believed that the state presence was guaranteed through military intervention," Dubinsky told teleSUR during the interview.

Journalist Moura added that the military intervention "was innocuous... a makeup, without effectively resolving the serious security problems in the state."

Benjamin Honorat commented that "because that operation has not yet had any results... now that the military is intervening, violence is growing. When the military confronts the traffickers and bandits against those who want to fight, the levels of violence increase."

The uncertain panorama leads to the question: 'What would happen if Bolsonaro wins?'

Brazilian journalist Moura's response: A very big setback in several fields. Political: his party was seen until recently as a 'legenda de alugel' (a party without ideology, empty and without the goal of an electoral victory)... without force within the Congress. Democracy: since he and his deputy have already shown contempt for democracy many times. Social: because he stands against the rights of minorities, whether of the "quilombolas" (residents of a Quilombo, afro-Brazilians settlements created by those who escaped from slavery) or Indigenous peoples, women and the LGBT community. Finally, economic: because the liberal policy proposed by his economist is sure to increase taxes for those who earn less and reduce the taxes of those who earn more.

French Sociologist and economist Benjamin Honorat's response: Well first, to be honest, I can not, until now, imagine that he gets elected. Those who vote for him see a supposedly honest candidate who will solve the issue of security against the bandits. That is the speech that is heard. Now, as I said, he (Bolsonaro) has a very high rejection rate, people have not created expectations around him. I think he does not represent. It is clear that the military would have more power, the Military Police would have more power. But I wonder if Brazilians really want to see this society that he is looking to create. I believe that there is so much rejection against Bolsonaro that there is no expectation around him. He is a person who seems completely ill-prepared.

Argentinian historian Adrian Dubinsky's response:  In my opinion, the arrival of Bolsonaro can be evaluated in four levels that we could call a priori: the economy, the security, the politics and the international relations. The first one is delegated to a bank man, (Paulo) Guedes, who proposes neoliberal recipes, such as, proposing the privatization of everything, including the Banco do Brasil and Petrobras. He said that it is paramount to sell everything. They propose an ultra-neoliberal economy and the power of the 'god' market.

On security issues, he advocates for a firm hand and the possibility, as in the United States, for the people to arm themselves to fight crime. The end of what he suggests is to terminate the system of guarantees of current law. Also, added to that, security would be prejudiced, which means being black, gay or a non-submissive woman would be framed similarly to that of a possible crime.

In politics, with the excuse of ending corruption and seeking political reform, coupled with lawfare, allows for wrongful and unsubstantiated cases of persecution and imprisonment in an attempt to erase - from the face of the earth - the fact of Brazil: Lulism. These extreme actions exceed the PT (Workers Party).

Regarding international relations, there would be a genuflective alignment with U.S. foreign policy, leading to a coup in Venezuela, with the consequent, subsequent assassination of Maduro, leading to the constitution of an economic bloc along with Colombia, Chile and the current Argentine Government to deregulate South America's economy.