The Sandinista revolution of 1979, led by the FSLN, overthrew the U.S. backed dictatorship of the Somoza family. The revolution brought health, education and land reform to one of the region's poorest countries. The revolution triumphed and still governs the country today, despite years of external and internal attacks that have all tried and failed to overturn the Sandinista legacy. 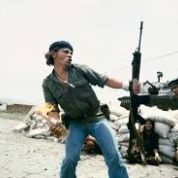 ‘Live From Nicaragua’: What Media Didn’t Say About the 2018 Coup Attempt

teleSUR put together a list of eight interesting facts that you may not have heard about one of Latin America’s most important revolutions, now in its 40th year.

1. The FSLN Was Founded in Honduras

The party of the Nicaraguan revolution was in fact officially founded in neighboring Honduras. The party’s founders, Carlos Fonseca, Tomas Borge and Silvia Mayorga were outside the country when the FSLN was officially born. Fonseca had been recently expelled by the Somoza dictatorship and was trying to build the movement from abroad. Later on, after the revolutionary victory, Honduras would then be used as a base by the counter-revolutionary forces.

2. Palestine’s Role in the Revolution.

The Palestinian resistance played a crucial role in the Sandinista revolution. The Palestine Liberation Organization (PLO) sent arms and provided training for Nicaragua’s guerilla forces before the fall of Somoza. Meanwhile, Israel was key ally supplying the dictatorship, even as the U.S. began to distance themselves. Then when the FSLN took power, the PLO was among the first to open an office there, with Arafat visiting Nicaragua to declare, “The way to Jerusalem leads through Managua."

The brutal counter-revolutionary war waged by the U.S.-backed Contra was partly funded by drug money, funneled to them by the United States. The U.S. Congress had banned the president from funding the Contras due to the atrocities they had carried, including using rape and torture as a weapon of war.

To get around this, the CIA got inventive. Documents released after the war showed that the CIA facilitated drug running by the Contras as a means of raising funds. One document even shows that then-director Oliver North had been pushing for the DEA to accept bribes from the Medellin Cartel which would then be sent to the Contras.

The cost of the U.S./Contra war on the Sandinistas had an eye-watering cost for the country. Estimates put the total economic damage to the country at around US$17 billion, a vast amount for a country with a population of just over 3 million in 1979. The social reforms of the Sandinistas, including health campaigns and land reform, helped the poorest. But the siege that Nicaragua was placed under was a collective punishment, by the U.S., for daring to launch their revolution.

Despite, or perhaps because of, the blockade and the war, the revolution meant that Nicaraguans came together on a level never seen before. The revolution was the beginning of mass unionization among Nicaraguan workers.

Before the revolution, 27,000 workers were in labor unions (many of them playing crucial roles in the general strikes that brought down Somoza), but within just three years the number of unionized workers quintupled to 150,000.

Women played a central role in the revolution of 1979, becoming the focus of land reform efforts, especially when the Sandinistas returned to power in 2006.

A 2007 land reform redistributed land to 80,000 Campesino families and put the land titles in the name of women so that they would no longer be financially dependent on either husbands or large landowners. Each family was also provided with “2,000 dollars worth of seeds, livestock, farming implements and assistance...a pregnant cow, an inseminated sow, several chickens, materials for building a pigpen, fruit tree saplings, vegetable seeds, and technical assistance.”

7. Overcoming Violence, Becoming the Safe Country in The Region

Despite the extreme violence of the Contra war, that claimed the lives of tens of thousands, the revolution has overcome that legacy.

Through community rather than repressive policing, along with the policies of social inclusion, Nicaragua has the lowest homicide rate in Central America. Its neighbor Honduras (from which the Contras launched their war), has a murder rate that's around 10 times that of Nicaragua.

8.  The U.S. Still Funds The Counter-revolution

Even after the role of the U.S. in destabilizing Nicaragua was revealed, the White House continues to funnel huge amounts to right-wing groups that once again, brought violence to Nicaragua during 2018 unrest that the government of Daniel Ortega has referred to as a coup. Groups such as M19 have traveled to Washington to meet figures such as Mark Rubio, and a number of groups have received U.S. funding, via the government's "National Endowment for Democracy".