The 2018 U.S. Midterm elections provided some positives and negatives for progressives in the United States and around the world. The Democrats took back the House, but lost key governer's races in Florida and Georgia, and the Senate became more Republican. However, this election also saw numerous open socialists win at the local, state, and national levels, as well as many other exciting firsts. 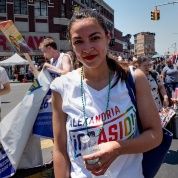 1. So far at least 11 self-declared Democratic Socialists of America (DSA) members (not endorsed, but actual members of the group) have won political races at the state and national level. Two have won nationally —Alexandria Ocasio-Cortez and Rashida Tlaib — and, for now, seven, including Julia Salazar in New York have won state legislator positions (the number could increase depending on a couple of election outcomes), adding to DSA member Lee Carter who won his race in the Virginia house in 2017.

Related:
Democratic Socialists and Women Make History in US Midterms

Besides Bernie Sanders and Socialist Alternative Seattle council member Kshama Sawant, open socialists haven't won many races since the time of Eugene Debs in the 1920s and 30s. A majority of Millenials prefer socialism over capitalism in numerous polls, and that number is sure to grow with the record debt, underemployment, and growth in inequality under Trump and the neoliberal Democrats.

DSA now has over 50,000 members, a number that could easily double by 2020 — it is the largest socialist org in the USA since the 1920s and the first socialist organization with electoral weight since the time of Eugene Debs. As the Socialist Worker reports, a Harvard student survey right before the election found that "only 26 percent of those surveyed supported Donald Trump — while 39 percent supported democratic socialism!"

2. Florida overwhelming voted to give voting rights back to 1.4 million ex-felons. This is a huge victory not only for basic human rights but also will make Florida much more of an in-play state for progressives.

3. Michigan approved recreational marijuana, making it 10 states plus D.C. where marijuana is completely legal; and Utah and Missouri approved medicinal marijuana making that number 33 states where it's available medicinally.

4. It was a great election night for women, people of color, LGBT candidates, Muslim candidates, refugee candidates, Indigenous candidates. For the first time in U.S. history, more than 100 women, women of color, LGBT, and Native Americans were elected to Congress and the Senate.

Related:
History Made as Minorities Elected to Congress

5. Besides Senator Manchin's win in West Virginia, all of the corporate center-right Democratic Senators that the corporate leaders of the party such as Nancy Pelosi and Chuck Schumer have said are the future of the party, have lost their elections (Missouri, Arizona, North Dakota, Tennessee, Florida, Indiana). Now is the time for candidates like Ocasio-Cortez to run as Senators and actually excite their base and bring the working class back into the fold.

6. The Dems won back the House and now have a progressive/left-wing caucus that makes up more than 1/3.

2. Nancy Pelosi is still the House leader. Chuck Schumer is still the Senate minority leader. These "leaders" not only double down on exclusive ivory tower politics and pro-capitalist ideology, but they have shown time and time again that they are weak when it comes to opposing the Republican and Trump agenda.

This election was just the start, the left-wing tide will continue to push into 2020, where huge and real gains can be made. As we can see from Trump's, the Republicans', and the corporate Democrats' attacks and sabotage against socialism and blasts against Bernie Sanders and new young socialist politicians, they are clearly scared and know that their clutch on power can be easily toppled.

As ISO member and co-host of the Better of Red podcast Jennifer Roesch eloquently writes in her recent article, Socialism Will Continue to Rise Regardless of Election Results, this left-wing tide in the streets, in the social movements, and now finally in U.S. electoral politics, is here to stay.

"The immediate results of Tuesday’s elections will be to prop up the illusions that the center has held and that American democracy and its institutions can survive the battering they’ve taken at Trump’s hands. But so long as the two-party system fails to deliver for the vast majority of people who are suffering, there will be a deepening of the volatility and polarization that has come to characterize American politics," she wrote.