Since July 26, 1947, the CIA has played a role in hundreds of assassinations, military coups, and rebellions around the globe, from Argentina to Zaire. 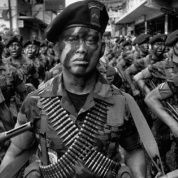 IN DEPTH:
CIA in Ecuador

Despite it's championing of freedom, the CIA's true objective has always been imperialist in nature. Whether oil in Iran or bananas in Guatemala, the U.S. has a material interest in every country in whose affairs it has meddled.

In order to meet its goals, the CIA recruits influential, intellectual and charismatic personalities. The agency also resorts to threats, kidnapping, torture, enforced disappearances and assassinations. The organization incites violence, uprisings and military rebellion, and causes economic chaos and misery to the people through scarcity of basic foods and so on.

The CIA has been exposed on a number of occasions through documented evidence, leaks of information and whistleblowing by active and former agents.

In 1944, the violent U.S.-backed dictatorship of Jorge Ubico was overthrown by a popular uprising. Ubico had merely served as a puppet of the United Fruit Company, which basically enslaved the population. It stripped campesinos and Indigenous people of their lands and forced them to work their own parcels and paid them crumbs. Those who dared to disobey were brutally punished by a police force working for the U.S. agricultural company.

The victory of the uprising brought peace to the country for 10 years, its culmination being the election in 1951 of progressive Jacobo Arbenz, who sought an agrarian reform.

In 1954, the CIA launched the code-named Operation PBSUCCESS. The country's capital Guatemala City was bombed by U.S. warplanes. The young Ernesto “Che” Guevara was there and witnessed the invasion first hand.

Under a series of military rulers after the coup, Guatemala suffered three decades of brutal repression in which as many as 200,000 people died, many of them campesinos killed by security forces.

Haiti is as strategic to the United States as are the Dominican Republic and Cuba. But in Haiti, the story is different. In 1959, two years after coming to power, Francois Duvalier, with the help of the CIA, created a rural militia called the Tonton Macoute after a Haitian Creole bogeyman in response to discontent among the people to his developing dictatorial rule. The Macoute, which by 1961 was twice as big as the army, never developed into a real military force but was more than just a secret police, terrorizing those who opposed the U.S.-backed dictator.

Duvalier's son, CIA-approved heir, Jean-Claude succeeded his father in 1971 and continued the repressive rule. During his presidency, until 1986, "prisons and torture centers claimed the lives of hundreds of victims. Arbitrary arrests, torture, deaths in custody, enforced disappearances and political killings were regularly reported," according to Amnesty International.

The early 1960s were years of incredible transformation in Brazil. President Joao Goulart implemented his “Basic Reforms” plan, which aimed to combat adult illiteracy; control the transfer of profits by multinational companies with headquarters abroad by reforming tax laws; expropriate land and redistribute to the population.

In 1964 a military coup ousted Goulart. Lincoln Gordon served as U.S. ambassador, playing a major role in support of the opposition against the government of Goulart and during the coup. On March 27, 1964, he wrote a top secret cable to the U.S. government, urging it to support the coup of Humberto de Alencar Castello Branco with a “clandestine delivery of arms" and shipments of gas and oil, to possibly be supplemented by CIA covert operations.

Joao Goulart's mistake was carving into U.S. companies' profits for the good of his people.

During the 1960s, revolutionary movements spread through Latin America. The United States saw influential socialist leaders emerge in this South American nation. For example, the urban revolutionary guerrilla group known as the Tupamaros. Jose “Pepe” Mujica was part of it and so was his wife Lucia Topolansky. Washington became obsessed with eliminating them, fearing the influence and power they were achieving.

Nelson Rockefeller went to Uruguay in 1969 on a Latin American tour commissioned by President Richard Nixon to observe first hand the growing anti-Yankee sentiment in the region. He returned to Washington to alert authorities that something needed to be done urgently. Of course, the CIA responded immediately.

They sent Dan Mitrione. In 1969, Mitrione moved to Uruguay to oversee the Office of Public Safety, under the guise of USAID. The OPS helped local police for many years in the 1960s, training them and providing weapons. Mitrione was reportedly the man who made torture routine, applying in his words, "the precise pain, in the precise place, in the precise amount, for the desired effect."

In 1971, Juan Maria Bordaberry was elected president under the Colorado Party. He led a coup in June 1973, with the blessing of the CIA, and remained in power until 1976, when he, in turn, was overthrown by the military. Under Bordaberry and Operation Condor, hundreds of people were murdered, tortured, imprisoned, kidnapped and disappeared.

In 1967, Che Guevara was murdered after having led a guerrilla war in Bolivia against the oligarchy. The CIA-backed mission to assassinate the revolutionary leader had international repercussions.

Meanwhile, in 1970, General Juan Jose Torres took power and implemented reforms to benefit workers and those living in poverty. Hope returned to Bolivia. After less than a year in power, Torres was overthrown in a bloody coup led by the Junta of Commanders of the Armed Forces. Despite massive resistance — both civilian and military — the conservative forces applied brutality without compunction. Banzer ruled the country for the next seven years, working within Operation Condor and the CIA to silence all dissent.

Two years after leading a guerrilla movement against the Bolivian oligarchy, Che Guevara was murdered.

In Chile, the CIA used different tactics but the results were the same. The agency led a smear campaign against the government of Chile, as it is currently doing in Venezuela. They used national and international media to demonize socialist President Salvador Allende.

By causing scarcity through extortion, through torture, imprisonment, enforced disappearances and assassinations, the CIA and right-wing forces in the country attempted to destabilize the country especially after Allende nationalized natural resources. On Sep. 11, 1973, Gen. Augusto Pinochet led the military all the way to the presidential palace with the backing of the CIA, who provided him with all the necessary weapons and armored vehicles.

War planes dropped bombs on the palace. Before he died, Allende told his people, “I will not give up! Placed in a historic transition, I will pay for the loyalty of the people with my life. And I tell you with certainty that the which we have planted in the good conscience of thousands and thousands of Chileans will not be shriveled forever. They are strong and they may be able to dominate us, but the social processes cannot be halted nor with crime nor by force.”

Pinochet ruled for 17 years, with the official victim toll at 40,018. These include detained and/or tortured; forcibly disappeared or executed; and kidnapped. Over 200,000 Chileans were forced into exile.

Salvador Allende, another victim of the many covert coups carried out by the United States.

The Dirty War from 1976-1983 was marked by detention centers, torture centers, massacres, rape of women and children and disappearances. In total, 30,000 people are believed killed, with 13,000 disappeared.

A military junta overthrew President Isabel Peron in 1976 and soon after the new Foreign Minister Cesar Guzzetti told U.S. Secretary of State Henry Kissinger that the military was aggressively cracking down on “the terrorists,” according to the New York Times.

Kissinger responded, “If there are things that have to be done, you should do them quickly,” warning that the U.S. congress may cut off aid.

Thus the Argentine government was given a green light by the U.S. to continue its brutal attacks against leftist guerrillas, political dissidents and suspected opponents.

There is compelling evidence to show that for over 30 years, members of the U.S. military and the CIA helped organize, train, and fund death squad activity in El Salvador.

Former Death Squad officer and Company Commander in the Salvadoran Army Ricardo Castro revealed that he held monthly briefings with Deputy CIA Chief of Station in El Salvador Frederic Brugger who had recruited him for intelligence work after meeting him at an interrogation class. Castro also claimed to have knowledge of the perpetration of large massacres of civilians by Army Department 5.

In 1980 and throughout the government's war against the rebels in the FMLN, the CIA-backed death squads terrorized the Salvadoran people. Archbishop Oscar Arnulfo Romero, a believer in liberation theology, was murdered as he was officiating mass in 1980. When the U.S.-inspired civil war was over, at least 75,000 people were reported murdered and many thousands displaced.

Archbishop Oscar Arnulfo Romero was an exponent of liberation theology and paid for it with his life.

Under the name “Just Cause,” the operation left at least 3,000 dead in its wake, with many unidentified bodies burnt and piled up in the streets, according to many witnesses.

The military invasion, launched by President George H. W. Bush, came 10 years after the small country had finally gained its independence over its canal. Ten days after the invasion, the canal, which belonged to the United States until 1979, was finally due to return to partial Panamanian control in 1990, and fully in 2000. In order to try to maintain a government that supported U.S interests, and to maintain U.S. hegemony in the region, Washington had previously tried economic sanctions, and even a failed military coup attempt, before resorting to a full-scale invasion.

The fear that their authority over the canal could be transferred to a government that didn’t completely submit to U.S. interests prompted the United States to claim it would be “saving” the Panamanians from a suddenly “cruel dictator,” who was also a drug-trafficker — an activity that they were aware of but did not seem to mind while President Manuel Noriega was collaborating with the CIA, in Washington’s fight against the Nicaraguan Sandinistas for instance.

Until 1988, Washington even praised Noriega's efforts against drug trafficking in the region on several occasions, even though the CIA kept a record of his involvement in criminal activities since 1972, as Noam Chomsky pointed out in his 1993 book, “What Uncle Sam really Wants.”

Until 1988, Washington even praised Noriega's efforts against drug trafficking in the region on several occasions .

Alberto Fujimori was elected president in 1990. He named Vladimiro Montesinos National Intelligence Service Director. Montesinos was at the center of a vast web of illegal activities, including embezzlement, graft, gunrunning, and drug trafficking. He was later tried, convicted and sentenced for numerous charges. Montesinos had strong connections with the CIA and was said to have received $10 million from the agency for his government's anti-terrorist activities.

As early as 1997, the U.S. state department annual human rights report's chapter about Peru described the massive power SIN had acquired under Montesinos' direction and its use against domestic political opponents. Despite those concerns, arms sales to the Fujimori regime by the U.S. government and U.S.-licensed companies nearly quadrupled in 1998 to $4.42 million, compared to $1.17 million in 1997.

On 7 April 7, 2009, a three-judge panel convicted Fujimori on charges of human rights abuses, declaring that the "charges against him have been proven beyond all reasonable doubt." The panel found him guilty of ordering the Grupo Colina death squad to commit the November 1991 Barrios Altos massacre and the July 1992 La Cantuta massacre, which resulted in the deaths of 25 people, among other crimes.