Haiti was destroyed by a magnitude 7.0 earthquake 10 years ago to the day, on Tuesday Jan.12, 2010, at 4:53 pm local time. Although it lasted less than 30 seconds it was equivalent to several atomic bombs exploding underground, making it the second-ever deadliest earthquake in history and the country’s worst natural tragedy in centuries. 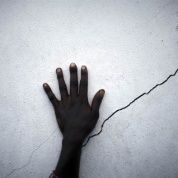 The disaster claimed up the lives of more than 300,000 people, destroyed entire neighborhoods, rubbled the streets, torn families apart, left 1.6 million homeless. Ten years later while the island is still struggling to fully recover, the consequences are still being felt.

On the anniversary of the tragedy, Telesur looks back at Haiti’s 10 last years, with a special focus on the deep damages caused by foreign intervention and climate injustice.

Life in Haiti was harsh before the earthquake, it was impossible afterward and until today it remains extremely tough. In a country ranked among the three most vulnerable to climate change, the quake's effects were then exacerbated by other catastrophes like Hurricane Matthew, which killed a thousand people in 2016, Hurricane Irma in 2017, and several episodes of severe droughts that resulted in declines in the agricultural production among other calamitous repercussions.

The impoverished country has been struggling in many aspects, let alone with climate action where its efforts lacked emphasis and were mostly pushed by international donors who established their own, ill-considered objectives, instead of closely working with local community organizations, who better know how to address their needs.

Unable to build its climate resilience, Haiti had and still has to rely on short-term handouts given by international agencies with every natural disaster that strikes.

At the time of the earthquake, the United Nations was present in the country since 2004, maintaining a peacekeeping operation as part of a U.N. Stabilization Mission dubbed Minustha.

The mission arrived following a United States-backed coup that forced out the former and democratically elected President Jean-Bertrand Aristide, to allegedly “enforce the law” after declaring that “the political and humanitarian crisis in the country was a threat to international peace and security.”

Following the earthquake, the U.N. decided to stay longer and shifted its role from “enforcing the law” to “disaster relief.”

However, as the international body officially ended its peacekeeping operation in 2019, many Haitians will not forget that, not only the mission did not bring them any peace, but more tragically, it created further misery in their already difficult lives.

Purportedly sent and kept in the island to reinforce security, promote human rights, assist with the recovery operations, the peacekeepers have only worsened the country’s health situation and committed abuses against vulnerable civilians.

In October 2010, they exacerbated the chaotic situation when a massive cholera outbreak was sparked by disposals of human waste from one of their bases. Seven years later, it was reported that roughly 10,000 Haitians had died and nearly one million had been sickened since the pandemic was introduced by the Minustah. But because keeping records has proved difficult given the rural nature of the population, the real figures are actually estimated to surpass 30,000 casualties.

Former Secretary-General of the U.N. Ban Ki-moon apologized in 2016 after his organization repeatedly denied any responsibility. But up until this day, the fault was not fully acknowledged and financial responsibility toward the victims thus avoided.

In addition to the cholera epidemic, the U.N. peacekeepers have been participating in countless acts of violence against civilians including sexual abuse of women and children.

In December 2019, a research conducted by the academic website The Conversation revealed that hundreds of U.N. peacekeepers, mainly from Uruguay, Chile, and Brazil, abused, sometimes raped and impregnated hundreds of girls and women.

These U.N. soldiers with money and food used their power to turn against the vulnerable people they were supposed to help, and eventually exploited them. Small amounts of money or food were given to girls as young as 11 and women in exchange for sex. Once the abusers returned to their homelands, the mothers were left to raise the children alone and in poverty.

The review of the U.N. presence reveals serious failures that further harmed a country where the institutions remain weaker than ever and the political unsteadiness at its highest.

The poorest country in the Americas has been shaken since 2018 by anti-government protests. A deep and complex economic crisis with increasing fuel and food shortages has sent people to the streets, to demand the resignation of the U.S.-backed president, Jovenel Moise.

Yet, the roots of the current crisis run much deeper than Moise’s mismanagement of the country’s affairs. If the president is a big part of the problem, it is a sinister combination of years of neoliberal policies, U.S. interventions, and climate injustice that can help understand the ongoing chaos.

Foreign interference, neoliberalism imposed by the West and the general degradation of the environment have deprived Haitians of access to the resources they need to be fully responsible for their lives and independently govern themselves. Repressed and oppressed for more than 200 years now, they have been punished for decades because they dared to win their independence.

Haitians have been pushed to the brink, and the latest protests engulfed everyone in the country, not only a small group of anti-government forces, as some media chose to present it.

The crisis goes back to March 2018 when the solidarity Petrocaribe agreement between Venezuela and the Haitian government, to provide the latter with low oil and gas supplies, came to end, leading to a surge in costs of living and affecting people in a very devastating way. As many people in Haiti depend on oil for their everyday life, the imposition by the U.S. of illegal sanctions on Venezuela, impacted Haiti in a direct way and resulted in a corruption scandal implicating the president.

The Venezuelan solidarity initiative was at a one percent interest rate and Haiti was given 25 years to pay for its supplies. It was supposed to help the island in financing reconstruction and development programs. Since it was forcibly ended, U.S. multinationals took over and started to supply oil and gas to Haiti, giving the country a few weeks to pay hundreds of millions of dollars, and sometimes, going as far as to withhold the supplies.

At the same time, no development infrastructures, including social and agricultural programs that should have resulted from the Petrocaribe, have been set up, while the Haitian administration betrayed its people to the point of supporting the U.S. and the Organization of American States (OAS) in their sanctions against Venezuela.

But what triggered the 2018 massive protests, was the government's move in July of that year to accommodate foreign agendas and jeopardize the survival of its own population, when it decided to remove energy subsidies, increasing thus fuel prices by more than 50 percent.

The decision was taken under pressure from the International Monetary Fund (IMF), the Group of 20 along with international agencies, which have been calling for an end to the subsidies. The move was also supposed to reflect Haiti's commitments under the Paris Agreement to reduce greenhouse gas emissions by 30 percent by 2030 when the country barely produces 0.02 percent of the global emissions.

So after centuries of slavery and colonial rule, Haiti managed to liberate itself from France in the 19th century, but it then fell within the U.S. sphere of interest and has since been unable to free itself. The U.S. occupied the country for nearly two decades, repeatedly interfered in its affairs, and has been imposing neoliberal policies, feeding its economic crisis and its growing dependence toward the west in parallel.

Haitian people have many ideas and solutions on how to resolve their problems if only the U.S. and foreign powers could let them work toward this goal in peace and independence. The vast majority of the people in Haiti know that neoliberal policies, austerity measures, and free-market economics will not solve the problems of a country facing the worst effects of climate change, government dysfunction, corruption, underdevelopment, and a perpetual debt crisis.