"To educate is to give man the keys to the world, which are independence and love, and to give him strength to journey on his own, light of step, a spontaneous and free being."  - Jose Marti, Cuban independence leader, 1853-1895 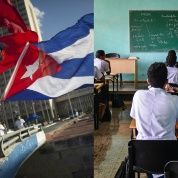 The Cuban Revolution of 1959 faced a crippling economic blockade from the United States for several decades, forcing the people of the small island nation to rely on themselves.

On the occasion of International Literacy Day, teleSUR takes a look at the major achievements of the Cuban people in fighting illiteracy and making the country a superpower and global model in the field of education.

1. Illiteracy Was Rampant in Cuba Before the 1959 Revolution

When Fidel Castro’s 26th of July Movement overthrew the U.S.-backed dictator President Fulgencio Batista on Jan. 1, 1959, the new revolutionary government inherited a country with a literacy rate as low as 60 percent.

By the end of 1961, a year the Cuban government dubbed “the year of education,” the nation’s literacy rate had risen to 96 percent, one of the highest in the world. This was the result of thousands of “literacy brigades” travelling across the country to rural areas, laying the foundations of what would become the most democratic education system in the Americas.

3. Education Was Made Free and Public

The Batista regime had promoted a model of education-for-profit, encouraging the privatization of schools, colleges and universities. In 1961, the revolutionary Cuban government nationalized all educational institutions, ensuring every child had a human right to free, quality education.

Historically discriminated against groups such as women, Afro-Cubans, other minorities and rural workers greatly benefited from the Cuban Literacy Campaign. Prior to the initiative, the illiteracy rate for those living in cities stood at 11 percent compared to over 40 percent for those in the countryside. By the end of 1961, this disparity had been abolished.

From Angola and the fight against Apartheid to the thousands of workers and specialists sent to Pakistan after the Kashmir earthquake of 2005, one of the core characteristics of the Cuban Revolution has been its staunch internationalism. The sphere of education is no different.

6. Cuba's Literacy Program Has Taught Millions to Read Across the World

Today, more than 10 million people from over 30 countries have learned to read and write through Cuba’s Yo Si Puedo (Yes, I Can) program, which operates in countries ranging from Spain to Venezuela. The program provides free education to poor adults who lacked opportunities to learn to read and write as children.

7. The Literacy Program Has Been Used in Africa and Australasia

For example, with Cuban support the model has been applied in Australian Aboriginal communities, where as many as 65 percent of Aboriginal adults are illiterate in English. In Timor-Leste, over 200,000 people were educated to read and write in just five years, while in Angola 300,000 people have benefited.

The Cuban Revolution has ensured every child has a human right to free, quality education | Source: Reuters

One of the biggest international supporters of Yo Si Puedo, Venezuela, saw massive results from the program, where tens of thousands of people have been educated under the initiative. The administration of late Venezuelan President Hugo Chavez implemented the program in 2003, and by 2005 UNESCO declared the country illiteracy-free.

9. Cuba Among the Countries That Invests the Most in Education

10. Cuba Sets an Example for the World​

In a world in which over 770 million people still lack basic reading and writing skills, Cuba is one of the few countries in the world with a literacy rate of 100 percent.