The Green New Deal had its origins long before the newest, youngest and most diverse U.S. Congress in history took their oaths of office at the start of 2019. But this new cohort of progressive Democrats has brought it to the mainstream as never before. If enacted as proposed, it could become the most influential policy to come out of the United States in more than a century. This article provides some basics on what the Green New Deal is, and some historical background to put it in context. 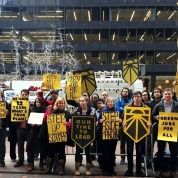 The Green New Deal takes part of its name from the New Deal, a policy enacted at a time in U.S. history when the economy was in serious peril and the government used every tool at its disposal to rescue many of its people from destitution. As a result of the success of its far-reaching ambitions, the New Deal continues to carry a mystique not only among progressives but among U.S. citizens at large.

The term began as a mere campaign slogan for Franklin Delano Roosevelt (U.S. president 1933-1945) who wanted a simpler way to communicate the message that his government would intervene in the economy and take responsibility for its development through targeted spending. It ended up capturing people's imagination and changing the government's relationship with its people for generations.

Before the New Deal, the U.S. was in its deepest and longest economic depression in history, leaving scores of people financially ruined within the context of a country with severe income equality. People were broke, starving, and losing their land and livelihoods.

New Deal policies started first by regulating the financial industry that had wreaked havoc on the markets but then moved on to increasing public works via government spending, giving farmers and tenants protection from landlords, guaranteeing labor rights, and creating a social safety net to protect the most vulnerable citizens. The most recognizable artifact of these policies in modern times is Social Security, created to, among other things, allow older workers to retire without fear of poverty.

The generation that lived through that time, and later through World War II, was dubbed the "Greatest Generation" by Tom Brokaw in 1998, which speaks to how much esteem their legacy continued to have in U.S. mythology. History defined those individuals as having the grit and determination to overcome any amount of adversity, an idea that continues to have significant sway over what U.S. citizens aspire to be.

The Urgent Need to Think Green

A new generation in the U.S. is coming of age and experiencing anxiety about the adversity to come, this time caused by climate change. Scientists have been warning of an impending climate crisis for more than a decade, pointing the finger at unsustainable warming caused by human activity. Institutions in the United States, however, have not taken these predictions seriously, with progressives enacting feel-good half-measures or some conservatives acting like the problem doesn't exist.

The U.N. has warned that the world has less than 12 years to avert the worst effects of the impending climate catastrophe. To be sure, some areas are already experiencing terrible effects from climate change in the form of more intense storms, more severe droughts, and other extreme weather conditions that have caused major destruction and forced mass migrations northward from Africa to Central America. According to U.N. data scientists, it will get much worse.

The governments of the world have failed to take significant action, especially the United States, which has historically contributed upwards of 27 percent of carbon dioxide emissions to the biosphere. Sadly, as reported by the Atlantic, the United States actually increased its carbon emissions in 2018.

And just as the dire prospects for the environment look almost inevitable, we're also entering another moment of extreme income inequality in the United States not seen since the Gilded Age.

What is the Green New Deal?

The person with the most credit for giving the Green New Deal the most airtime, and who has practically become its spokesperson, is the 29-year-old freshman congresswoman Alexandria Ocasio-Cortez from New York. She frames the banner climate policy through the lens of “American exceptionalism,” saying, “This is going to be the New Deal, the Great Society, the moon shot, the civil-rights movement of our generation.”

The idea, still being worked out in terms of specific measures, is to harness the full force of government on a grand scale and use it to create green jobs, nourish sustainable industries, fund ecological inventions, and enact economic interventions, all with the aim of creating a truly sustainable model to not just reduce carbon emissions, but reverse them before more damage occurs.

The aim is to counter the careless destruction of the environment by guiding the economy away from a model that only sees profit in its exploitation. Our current economic model sees growth only in terms of neverending consumption and detaches it from the end result — the rampant, irreversible destruction of land, forests, water sources, habitats, and animal species. Worse still, it uses the idea of the free market to protect, for example, oil companies who have long sought to stifle market innovation when it relates to energy efficiency or green technology.

The proposal as presented would make the United States completely fossil-fuel free within 12 years, which some have called too radical a proposal that runs the risk of severely damaging the economy. Regardless, many of the new progressive Democrats in the U.S. Congress are continuing the fight, arguing for ways to carry out such a plan so that everyone prospers.

The #GreenNewDeal would create millions of good paying jobs and bring prosperity to communities left behind. If we want to save the planet for future generations, we need bold, not incremental, action on climate change. pic.twitter.com/JcqWnd6tby

“Only Radicals Have Changed the Country”

Ocasio-Cortez admits that hitting Green New Deal targets would require massive changes at a rapid pace and that to change the status quo based on today's technology would negatively affect the quality of life in the U.S. and any other countries dependent on fossil fuels. Critics have used this admission to make exaggerated statements trying to instill fear, accusing her of seeking to bring down entire industries and throw scores out of work.

It's true that certain industries could suffer, but part of the appeal of the plan is the idea of reasserting the government’s role in funding new technology to address potential quality-of-life issues. Companies have gotten a free pass, profiting from things that can't be put on a balance sheet, but which have inordinate value. The Green New Deal would ideally measure that value, and guide companies toward a path that works for all.

One method the government would have at its disposable to enact these changes is to spend as much in adjusted terms as the country spent developing military technology throughout the 20th century. Imagine if the country worked with as much single-mindedness towards environmental solutions as it did to create the atomic bomb during World War II. This all-encompassing push would have the effect of creating numerous jobs to support the new or modified industries.

The venture capitalist schemes that have given us much of what we enjoy today in digital technology hasn't proven sufficient to manage the challenge of climate change, and we're running out of time. The investments required are too risky, too unproven, and wouldn't necessarily turn a profit right away. To ameliorate some of the costs associated with such a huge investment, in an interview with 60 minutes, Ocasio-Cortez proposed increasing the tax rate on top earners to something like what the United States had in the 1950s:

“People talk often about the infrastructure investment that has to happen, and new technology,” said Saikat Chakrabarti, Ocasio-Cortez’s chief of staff. “But there’s also an industrial plan that needs to happen to build entirely new industries. It’s sort of like the moonshot. When JFK said America was going to go to the moon, none of the things we needed to get to the moon at that point existed. But we tried and we did it.” The Green New Deal, she added, “touches everything — it’s basically a massive system upgrade for the economy.”

Extreme times call for extreme measures, and the United States under Trump has become nothing if not extreme. The blowback against the Trump administration is driving more people toward the left, giving more strength to the possibility of real action on climate change. Right-wing groups, recognizing the threat, are already mobilizing against the idea but so far, have been on the fringe.

The Green New Deal enjoys broad support because the data speaks for itself: this may be the last chance the United States has to take positive steps on behalf of the environment before a major catastrophe threatens our entire civilization.