Mexico marks Wednesday, Sept. 26, four years since the disappearance of 43 missing Ayotzinapa students, as relatives and friends continue searching for their loved ones with almost no help from Mexican authorities. 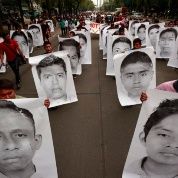 They have repeatedly refused to believe the official narrative that the students were kidnapped by Iguala police on the command of Mayor Jose Luis Abarca Velazquez and handed to the Guerreros Unidos (United Warriors) drug cartel, which the government insists then executed them.

Instead, the families maintain their claim that the military was involved and that the government constructed the narrative to protect an already-discredited institution that has murdered thousands over the years with almost total impunity. Students from the Raul Isidro Burgos Rural Teachers’ School who survived the attack say they were denied help by Federal Police and military personnel at the scene, who said they "deserved it."

On Sept. 20 this year, students from the Raul Isidro Burgos Rural Teachers’ School of Ayotzinapa attacked the 27th Infantry Battalion of Iguala with Molotov cocktails, rocks and firecrackers. The event was recorded and shared on social media, prompting both support and condemnation.

Relatives of the missing students have demanded the federal government let them enter the barracks, which is where they believe the students were taken after being kidnapped. In 2015, after multiple petitions were ignored, they forced entry into the barracks but were escorted out before they found any evidence.

Among the few clues that have been recovered is a mobile phone belonging to Julio Cesar Mondragon Fontes, whose body was found a day after the attack. The student's face had been surgically removed.

The phone company revealed his line registered one call from the Center of Investigation and National Security (CISEN) and three from Military Camp 1A before it stopped working in April 2015.

Rafael Lopez Catarino, the father of one of the missing students, says a friend at the state prosecuting office helped him track the GPS of his son’s mobile and found it was used for the last time at Iguala's 27th Barracks. In addition, a colonel, a captain and 34 officers told prosecutors they witnessed the massacre but did not intervene.

Victim's relatives later invited the Inter American Commission of Human Rights (IACHR) and the Interdisciplinary Group of Independent Experts (GIEI) to study the case. They concluded that there were glaring irregularities in the process, including confessions based on torture, and said there was no evidence to support the government's claim that the students' bodies were incinerated at a landfill.

The GIEI findings were supported by the Argentine Team of Forensic Anthropology (EAAF) on Aug. 30, a day after Mexico's President Peña Nieto reaffirmed the official version of events.

“In 18 months of recollection and multidisciplinary tests of the physical evidence coming from the landfill in Cocula,, we couldn’t find objective scientific elements that prove the incineration of 43 bodies on the night of Sept. 26 to 27, 2014, in that place,” the EAAF said in a statement.

The forth anniversary of the disappearance of the Ayotzinapa students comes just a few months ahead of the inauguration of the government of Andres Manuel Lopez Obrador, which has relatives and activists wondering whether the new center-left president, who has vowed to investigate the military's role in the disappearance, can change the outcome of the investigations.

Relatives and surviving students have long expressed their distrust of the authorities. The teacher training college has been politically active since its foundation, with a class perspective that has bred social leaders for decades. Lucio Cabañas, one of Mexico's most renowned guerrilla fighters, is among its alumni. He founded the 'Partido de los Pobres'' (Party of the Poor), a clandestine armed organization.

Lopez Obrador may have supported Mayor Abarca and State Governor Angel Aguirre during their campaigns with the center-left Party of the Democratic Revolution (PRD), but today his team represents the hope for change in Mexico’s political sphere and may yet lead to justice.

The future government has already met with relatives and friends of Mexico's forcibly disappeared, pledging to bring the investigations to a proper conclusion.

His team recently asked the IACHR to bring back the GIEI, which was forced to leave Mexico in 2016 after rejecting the government's so-called ‘historical truth.’

Lopez Obrador held a meeting at Iguala on May 25, when relatives and friends of the missing 43 agreed to form a collective.

“When you become the president, what do you commit to with these 43 family heads (representatives)?” one of the parents asked Lopez Obrador. “We’re telling all these people we will visit every candidate to tell them what they will do, but it’s important you tell us, what’s the commitment to these parents? There’s a lot of suffering, Mr. Andres.”

AMLO vowed to create a truth commission to investigate the case in depth, but it wasn’t enough for many: “We know Sanchez Cordero and Alejandro Encinas have been designated to follow our case,” said Alfredo Galines, father of one of the students. “We see their participation with hope. We hope you soon meet with our lawyers to establish a roadmap.”

The parents also demanded a meeting with Lopez Obrador on the fourth anniversary of the disappearance to discuss future action, to which he agreed. And they are planning marches and organizing talks across the country.

2018 marks the year in which the students were due to graduate. Their absence was remembered by everyone present at the July ceremony.

On Sept. 21, they protested outside Guerrero’s main court demanding authorities release footage from Iguala's security cameras showing the night of the attack. Authorities, however, deny any such footage exists.

So far, the parents of the 43 and surviving Ayotzinapa students have met with thousands of people across the country in their search for justice. Despite everything, they still maintain their hope of finding their children alive.