A virtual unknown figure to United States politics almost two and a half years ago, U.S. President Donald Trump’s pick for Defense Secretary, Patrick Shanahan, is a questioned choice for running the Pentagon, mainly due for his lack of experience in defense and foreign policy, but also for deep ties with private sector interests, especially the Boeing Company. 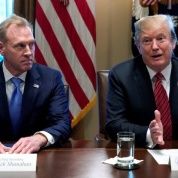 However, White House spokeswoman Sarah Sanders said in a statement on Thursday. that “based upon his outstanding service to the country and his demonstrated ability to lead, President Trump intends to nominate Patrick M. Shanahan to be the secretary of defense.”

The 56-year old, Shanahan, had been heading the Department of Defense (DOD) since Jan. 1, 2019, after General James Matis resigned over differences with Trump on defense policy, especially the decision to withdraw from Syria. Before assuming the first post in the DOD, since March 2017 Shanahan worked as the 33rd Deputy Secretary of Defense, the Pentagon's second-highest civilian position.

And that is all that can be said of his career in politics and the public sector.

Preceding the Pentagon, Shanahan’s career for over three decades has been dedicated to Boeing. The former executive had overseen the Ground-based Midcourse Defense system, Airborne Laser and Advanced Tactical Laser programs, worked on the 737 and 787 Dreamliner commercial airplanes, and on April 2016 became senior vice president of supply chain and operations for the company.

From that, he went ahead to work for his second-ever employer, the Pentagon, with less experience in government (two years and a half) or the military (none) than any defense secretary since an oil tycoon, Bill Clements, served for a brief time during the Nixon administration.

But as a character, Shanahan is more complex than just a mere former executive with no military background as media has portrayed him. Based on statements from the DOD, Trump and senior officials in the Pentagon, he will serve a precise objective in the current administration plan’s.

2 of 2: I remain committed to modernizing the force so our remarkable Soldiers, Sailors, Airmen, and Marines have everything they need to keep our military lethal and our country safe.

The “Yes-Man” of the DOD

The first one will be implementing the White House’s wishes for the DOD. As deputy defense secretary, Shanahan made it clear that “we are not the Department of No,” as he told officials after the Trump administration announced the creation of a "Space Force" at the Pentagon.

A very important statement that Riki Ellison, a friend of Shanahan’s and the chairman of the Missile Defense Advocacy Alliance - an organization that aims to build public support for missile-defense systems - has reiterated.

“He’s not gonna dictate. He’s gonna follow what the president’s intent is,” Ellison told The Atlantic back in January, adding that the Acting Defense Secretary is “an efficient doer of things.” A brash contrast from “Mad Dog” Mattis, who according to The Washington Post, often did not “share Trump’s enthusiasm for negotiating defense contracts,” and often clashed with the president.

Former senior defense official has said “he doesn’t understand national security and doesn’t have the moral and ethical constraints that Mattis has, he’s made no enemies,” telling the New Yorker back in 2018 that “he hasn’t taken a position on anything.”

Yet what many would consider a blemish for a Secretary of Defense, has made him very endearing for the White House.  While visiting U.S. soldiers in Iraq over Christmas 2018, Trump praised Shanahan as a “good buyer” of military equipment, and not the expert strategist and military man that many expected.

Not an army man but a salesman

And this is might the reason Shanahan is where he is at the moment. As a mechanical engineer, the former Boeing executive is a full-on technocrat with a strong business sense. Jim Albaugh, a retired Boeing executive who was Shanahan’s boss in the company’s defense division told The Atlantic that “he’s pretty apolitical.” While at Boeing, Shanahan donated to both Democratic and Republican political candidates.

This pragmatic trait is what Trump’s DOD seems to need at the moment, as Shanahan has started a budget revision of the whole Department in a bid to modernize and “lethalize” the government agency.

During his brief period in the DOD, he has spearheaded the digital and technological modernization for the department in areas such as cybersecurity, artificial intelligence (AI), cloud computing and command, control and communication. In June 2018, established the Joint Artificial Intelligence Center (JAIC) and published the Department of Defense’s AI Strategy.

On his first day as acting Pentagon chief in January, Shanahan told civilian leaders of the U.S. military to focus on “China, China, China,” meaning the Acting Secretary is not preparing the DOD for today’s wars but dangerous planning for future confrontations.

In a statement, he has committed to modernizing U.S. military forces and if confirmed would aggressively implement Trump’s national defense strategy which prioritizes competition with China and Russia over the counterinsurgency wars that have consumed the Pentagon for much of the past two decades.

Just as this President Trump doc shows no evidence of any silence of favoritism deals between Facebook and Boeing related to the $10M 2014 windfall profit off these corps. Common ground legally ur dead on, common ground public may differ greatly. Full doc: https://t.co/O5Bnu3zLgw pic.twitter.com/k66e2og7NG

A cozy relationship between Trump and Boeing

But this is not all Shanahan represents for Trump’s administration. The former Boeing executive is a clear proof of deep ties between the president and the country’s largest exporter of U.S. goods. Something for which the Acting Secretary has had his ethics questioned on Capitol Hill, amid grumbling over his management style and comments at the Pentagon.

An investigation by the Pentagon’s inspector general was launched based on allegations that in private meetings he verbally attacked Lockheed Martin, the top U.S. government and defense contractor, while boosting his former employer, and pushing to get better and more contracts with that company.

The U.S. Department of Defense is hiring Boeing to expand and improve its Ground-based Midcourse Defense (GMD) anti-ballistic missile system—which has undergone a significant redesign under Shanahan.

The inspector general’s report, released on April, cleared Shanahan of impropriety but also cited numerous meetings at the Pentagon during which Defense Department officials said he had promoted his experiences solving production problems on the Dreamliner as techniques that should be copied by the government.

The importance of the Boeing Company with the U.S. government lies in its military relationship. The manufacturer is second-largest U.S. government and defense contractor, receiving between 2014 and 2018 US$104 billion in unclassified defense contracts, right under Lockheed Martin. A reason why the company has made sure to have a “good” relationship with the White House.

Since 1998 until 2018, Boeing has spent about US$290 million on lobbying and spent more in the last Congressional session than any other company in the defense aerospace industry. The result of this was a big win, especially the aircraft manufacturer, as in 2017 the Republican and Trump-backed “Tax Cuts and Jobs Act” slashed corporate income tax from 35  to 21 percent.

In line as well with both Trump and Shanahan’s business strategy to push for more arms sales to allies. U.S. officials and defense industry sources said that weeks after Trump pressed the Emir of Kuwait in 2018 over a long-delayed deal for Boeing’s F/A-18 Super Hornet fighter jets, Kuwait said it would proceed with the order.

But the revolving door in Washington, which moves people like Shanahan between government jobs, industry posts, and lobbying groups, is far cozier. From 2008 until the present, Boeing has 19 officials from the Department of Defense, according to the Project on Government Oversight. While on April 29, Former U.S. Ambassador to the United Nations Nikki Haley has officially joined Boeing's board of directors.

So its seems Shanahan is not an odd pick for the job of Secretary of State, but the one both Trump and Boeing are happy with.