6 June 2019 - 02:09 PM
Analysis
The Spoils of Economic War: How the US, Saudis Profit From Sanctions on Venezuela and Iran
0 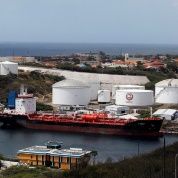 But if unilateral harassment has proven itself historically ineffective at achieving conventional geopolitical objectives, why does the U.S. insist on bullying Venezuela and Iran?

A glance at the political economy of international oil markets, an industry used as a battlefield to further the aims of war, provides insight into the seemingly irrational realm toward which President Donald Trump has been leading U.S. foreign policy.

Since international markets are highly speculative, many believe that price trends cannot be manipulated; however, that is not true. When energy commodities and strategic raw materials are involved, the U.S. does not sit back as a patient price taker but prefers to throw the dice as a price maker.

Between 2006 and 2014, when China's economic boom was increasing the demand for international commodities,  structural changes occurred that paradoxically favored the U.S. a few years later. First, high oil prices allowed the fracking industry to become a financially viable option.

US Renames Natural Gas to 'Freedom Gas' Made of 'Freedom Molecules'

This, in turn, helped the U.S. gradually overcome the dependence it had experienced for 30 years, and which made it the world’s largest oil importer in 2016, with a voracious appetite of around 12 million barrels per day (bpd).

In December 2018, for the first time in the last 75 years, the U.S. became a net oil exporter thanks to "thousands of wells producing from the Permian region of Texas and New Mexico to Bakken in North Dakota and Marcellus in Pennsylvania," the Los Angeles Times reported.

"We (the U.S.) are becoming the dominant power in the world," as Michael Lynch, president of Strategic Energy and Economic Research, Inc. said.

Trump is reaping the fruit of energy independence, a condition he did not contribute to at all. This abundance of energy is fragile, however, because maintaining it depends on keeping oil prices as high as possible.

Therefore, to force this to happen, anything that threatens to diminish global oil supplies is actually good for the U.S., including the blockade of Venezuelan and Iranian exports.

If you can't make more pie, make sure you control the slices

While the U.S. now has enough oil to be able to export some of its reserves, Trump’s homeland can't satisfy the world's energy demands completely. This opens up business opportunities for Saudi Arabia and other allies who can also benefit from economic sanctions against Venezuela and Iran.

Before April 2018, when the U.S. began applying a new round of sanctions against the Persian nation, Iran was OPEC's second largest producer and exported almost 3 million bpd. Since then, however, its oil production has been reduced by more than 1 million bpd.

In Venezuela, U.S. foreign policy has achieved a similar result: between February 2018 and January 2019, the Bolivarian Republic's average oil output decreased from 1.5 million bpd to 1.1 million bpd, which is almost 50 percent below its production levels in 2006.

Oil production in Venezuela and Iran fell further in May. In both countries, production is down more than 30% since US sanctions were imposed. Looks like sanctions will continue to be one of the forces shaping the oil market. #OOTT pic.twitter.com/i0mKrsUn5T

These combined results have triggered a trend towards the contraction of global oil supplies, which could be worsened if the Libyan civil war adds another cut of 1.2 million bpd in the near future.

Nevertheless, the oil market’s invisible hand is not enough to ensure that those high prices the U.S. desperately needs, since global supply basically meets global demand, moving around 99.5 million bpd, according to data from the International Energy Agency (IEA).

This won't change one its own — global economic growth will not easily lead to a new boom in oil demand. On the contrary, factors such as the U.S. trade war against China and Brexit could reduce growth prospects all over the world.

In this context, where oil demand remains more or less fixed, putting Venezuela and Iran out of business changes the portion of pie each country gets. And, of course, only the lucky ones get to continue enjoying their slice of the oil markets. Among these is Saudi Arabia, a country that will be able to capture more clients and expand its oil output without violating its OPEC commitments.

Oil prices have already responded to the U.S.'s politically-motivated supply shortages. The average crude oil spot price rose from US$56 per barrel in January to US$67 per barrel in May, a 16 percent increase. This would not have been possible without the sanctions that prevented Venezuela from selling over 50 percent of its production in February.

Certainly, the international average oil price will most likely remain below US$100 per barrel, but current unstable equilibrium prices are enough to keep U.S. companies in the fossil-fuel business at home and abroad. One of the short-term costs of this maneuver could be price volatility. However, it seems that Trump administration has assimilated such an eventuality — global stability hasn't ever been one of the U.S's. foreign policy priorities.

In the past week, 36 countries （#China #Russia #India #Iran #Turky #EU #Mexico #Cuba #Venezuela ）on the planet have received warnings,sanctions or threats from #US pic.twitter.com/1UM8QuHtl1

Looking at it pragmatically, the negative consequences of harassing Venezuela and Iran are outweighed by a very lucrative reward: 2 million oil barrels per day.

"The U.S. currently removes about two million barrels of oil per day from the world's supply through sanctions on the Iran and Venezuela industries. But Washington hopes that soaring U.S. oil production - now at an all-time high of more than 12 million barrels per day - will keep global markets well-supplied and hold prices down," Reuters commented on May 5.

The political manipulation of supply and demand is a risky rent-seeking game. And this is where Trump's personality could play a key role — he is not a risk-averse player. So far, he seems unconcerned with the collateral damage arising from his economic warfare.

One of them is that U.S. sanctions "will help oil producers because the prices will go up, and Russia will be one of the most significant oil producers," said Robert Malley, former Middle East aide to President Barack Obama, as reported by RIA Novosti.

We are no longer living in that “good old world” in which U.S. geopolitics had to do with ensuring the flow of cheap natural resources from the closest friendly provider.

"Hence, paradoxically, a regional production crisis near U.S. territory could be good for the U.S. in the medium term," Giancarlo Elia Valori wrote in Geostrategic and added that "the U.S. is entirely in favor of an increase in the oil barrel price - and hence indirectly in favor of tension in Venezuela."

Trump opens war fronts everywhere, which wouldn't seem to make sense unless they were a distraction. But they're not.

The rise of China as a global power has been silently transforming the international monetary system, another element triggering the U.S. into endless economic bullying.

Since the abandonment of the gold standard in 1971, the U.S. dollar is not linked to any assets, becoming a fiat currency. In these kinds of cases, only a country's output could back the currency in the long term. But what happens when monetary expansion occurs faster than increases in productivity?

Bringing new meaning to the "In God We Trust" motto coined so long ago, the dollar’s value depends on its capacity to remain an international reserve currency; that is, a currency other countries hold as part of their foreign exchange reserves and use in their international transactions.

In a world where economic agents don't ask the Federal Reserve to convert their notes into gold or any other physical asset, trust is the only thing keeping the U.S. upright. As a result, the dollar has remained a mighty currency because most international transactions are traded in U.S. dollars.

On Jan. 30, U.S. National Security Advisor John Bolton, in fact, revealed very little when he blatantly admitted that the coup attempt in Venezuela was really about grasping for oil resources. In reality, aggression by the U.S. hides something much more than that.

If the dollar stops being the world's most traded currency, the U.S. will not be able to issue the notes it needs to finance an almost 50-year-old federal deficit which rose from US$666 billion in 2017 to US$779 billion in 2018.

"That's the biggest deficit since 2012," wrote Kimberly Amadeo in The Balance, noting how President Trump has ramped up the U.S. deficit to pay for record-high levels of military spending.

The dollar losing status as the world's preferred currency would give the U.S. problems paying for imports in an economy where its lack of international competitiveness has given it a trade deficit since 1976, which widened to US$50 billion in March.

Last but not least, if the dollar stops being almighty, the U.S. will have a very difficult time maintaining itself as a first-world-class economy, since it's federal debt exceeded US$22 trillion in February. This amount represents over 76 percent of what the U.S. is able to produce in one year. Nevertheless, this is most likely to get worse: the debt-to-GDP ratio in the United States will rise to 150 percent by 2049, according to the Congressional Budget Office.

Besides preventing Venezuela and Iran from exporting their natural resources, the U.S. is actively seeking to avoid the dollar's collapse, an inevitability in the next few years, as the history of previous empires has already shown.

This is why the Trump administration is prone to fighting the use of barter, virtual currencies or other alternative international payment methods.

U.S. sanctions are not whimsical expressions of this president. They are tools used to retain hegemonic power in a multipolar world no longer willing to tolerate such an aspiration. At the core of U.S. bullying is not ideological disagreement but economic decline.