“We shall meet again, in Srinagar, 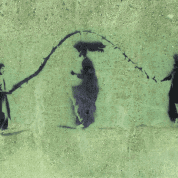 by the gates of the Villa of Peace,

our hands blossoming into fists

till the soldiers return the keys

our last world, the first that vanished…”

Muazzam Bhat, a 25-year-old rapper from Indian Occupied Kashmir, is one of many young artists picking up guitars, paintbrushes, and cameras to protest the atrocities against Kashmiris. The valley, which sees daily uninterrupted violence, has seen bruised and battered but almost forgotten lives in the world map of conflict zones.

71 Years of Occupation and Piling Bodies in Indian-Occupied Kashmir

Bhat's new song “Criminal” has some strong lyrics and describe the situation in Kashmir and how the people are considered criminals for speaking out against injustices in the valley committed by India's armed forces. “Welcome to the market, dead bodies for sale,” sings Muazzam Bhat in his recently published single.

Indian mainstream media’s portrayal of Kashmir and Kashmiris as terrorists who deserve to die has also greatly affected the militant pro-freedom movement in the valley.

These youngsters have picked up the task to change that scenario. Through their art, they are trying to change the narrative the occupying nation has built while also trying to shine Kashimiri laments before the entire world.

“As artists we have to take a stand. Right now, what I believe is in is documenting the conflict. There are journalists who are doing really great work at documenting but I feel it should be done in creative ways as well. We should contribute to literature and art. If we look at journalism, it is being filtered as everything is under surveillance. I believe art is one medium that surpasses all these filters,” Khytul Abyad, an artist from Kashmir, told teleSUR.

Khytul is an artist who has tried to capture Kashmir conflict through her often vibrant, often macabre paintings. During the 2016 uprising after the killing of militant fighter Burhan Wani, when the whole valley was under curfew for six months — the longest curfew in any conflict zone —Khytul started painting graffiti near her home in South Kashmir’s Islamabad (referred to as Anantnag by India) district.

“Though I am not a graffiti artist but I thought it was the only medium I could use during 2016 when everything was shutdown. I could not go to my college. I was out of material. I could not draw. I also thought that we did not have a voice. During that time, I thought grafitti was the only medium that could go directly into the mass. It felt like you are documenting something in a public space,” she said.

For her, that graffiti and her art are “acts of resistance.”

Art, however, for them is not only a means to protest against occupation but also a process of healing.

A photographer, under condition of anonymity told teleSUR, “If I did not have my camera, I would have picked up a gun.” The young photographer, who runs to every encounter site, funeral site, sites of violent exchange between the army and young Kashmiri protestors, feels that the camera works as a cathartic element in his life.

The anger, passion, and sorrow of the colonized mass captured through his lenses helps him release his own frustration and anger against the occupation.

Ali Saffudin, another singer from Kashmir said in the documentary “In the Shade of Fallen Chinar,” “Conflict is a perfect place for art to thrive. Art for the heck of art is one thing but art for personal healing is another. We Kashmiris have that kind of art here.”

However, these young artists face many obstacles. Roushan Illahi, another famous rapper who has produced some emotionally charged singles, had to go into hiding when he was harassed by the government and since then has been difficult to get a hold of, eluding both media and well-wishers alike.

Apart from government subjugation, society sometimes does not make things easy for them.

“I find it difficult to convince people that art can actually be helpful. I understand where it is coming from. We do not have a history of art, there are very few artists in Kashmir which many people do not know about. So it gets very difficult to convince people that art can actually make a change. I am not saying it will bring a huge difference but if we start understanding it, accepting it, it can start making a difference, even if small,” Khytul opined.

But they will not stop singing or painting or clicking despite society, government, and often their own comrade's obstruction.

In February, Ali was offered a gig to sing for a tourism event at the tourist spot Pahalgam as part of Jammu and Kashmir Tourism Department’s Winter Festival. His being selected brought widespread criticism from his own comrades. Some even called him a state-collaborator for performing in a government-sponsored festival.

Ali, despite all criticisms, went on stage paid for by the government and sang songs of ‘azadi’ (freedom) amid cheers and slogans from people.

There are more and more writers, artists, actors, singers, photographers coming out in the society who believe art can make a difference in the conflict. Some are even trying to use art for children to heal from the brutality they see in everyday lives.